Arla Farmers Will Use Big Data To Accelerate Journey Towards Carbon Net Zero. 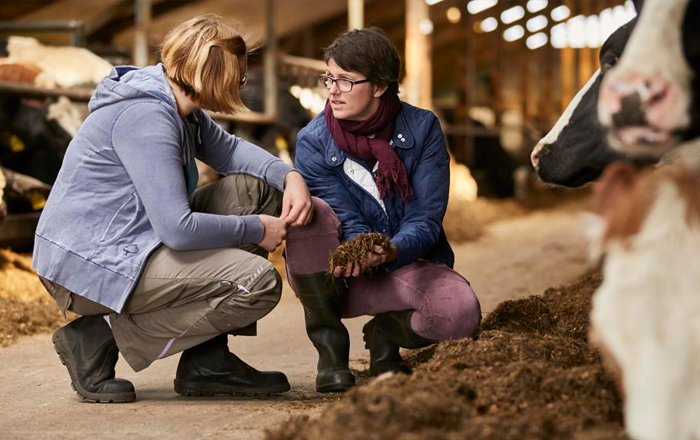 The 9,900 farmer owners behind the European dairy cooperative, Arla Foods, are accelerating their efforts to reduce their carbon footprint. Arla Foods is the first dairy company in Europe to introduce an initiative across seven countries that will triple the speed of CO2e reductions on farm and accumulate one of the world’s largest sets of externally verified climate data from dairy farming.

Arla Foods farmer owners are already among the most climate friendly dairy farmers in the world, producing milk with less than half the average of emissions per litre compared to global dairy production. Now Arla Foods is introducing a new Climate Check programme and comprehensive support to all its 9,900 farmer owners in Northern Europe to fight climate impact. This will pave the way for the company to reach its ambition to reduce carbon emission by 30 per cent by 2030 and have a neutral climate impact by 2050.

“Dairy is an excellent natural source of nutrients compared to its carbon cost, but we have a strong desire to make the balance between nutrients and CO2 even better. Arla farmers have already cut emissions by 24 per cent since 1990, but we also recognise that it’s not enough. As in any other industry, we need to do more and we need to do it faster,”

Data set will help develop next moves on farm

The new global standardized tool for Climate Checks on farms in seven European countries builds on the successful climate check model that was introduced to Arla farmers in Denmark in 2013. The Climate Check will help the farmer identify emissions on farm and provides a clear picture of the actions farmers can take to reduce emissions further. Each Arla farmer will input information covering everything from herd size to housing, milk volumes, feed usage and feed production, energy and fuel usage and renewable energy production.

The Climate Check programme will include a digital reporting tool, in which all farmers will submit their climate data. The data is verified by an external advisor who will visit the farm to provide advice on action plans.

As data from potentially 9,900 European dairy farms and an annual production of 14 billion litres of milk is submitted during 2020, Arla is building one of the world’s largest sets of externally verified climate data from dairy farming. This will be the solid foundation for benchmarking, knowledge sharing across the dairy industry and correlation analysis.

”We will be able to benchmark against our farmer colleagues on carbon footprint. But equally important, the data can be used to gain more knowledge and science-based solutions in collaboration with the agricultural sector and academic institutions. This will be important as we decide on which science-based solutions will take us to the next level in the fight against climate change,”

To support the farmer owners in using the new Climate Checks, Arla’s Board of Directors has decided that farmers who sign up to the Climate Check in 2020 will be paid a financial incentive of one eurocent per kilo of milk. Based on earlier initiatives, a financial incentive has proven to be effective in supporting programme roll-outs. Arla Foods Chairman Jan Toft Nørgaard expects the vast majority of Arla farmers to sign up to the Climate Check, thereby accelerating work to reduce carbon emissions.

“Within our cooperative, we have some of the most climate-efficient farmers in the global dairy farming sector. But not all farmers have had the possibility to do the Climate Check yet. So this decision by our Board releases that potential in addition to the ongoing knowledge and learning that we will all benefit from”, says Jan Toft Nørgaard.

This announcement marks the latest in a series of sustainability measures taken by Arla and its farmer owners in the last few years. These include participating in the development of a global and scientifically approved way to measure carbon sequestration, Arla’s own research to evaluate ways methane emissions might be reduced through feed choices and experimenting with ways to increase biodiversity on farm.

Climate Check: Between 1990-2015 Arla farmers have reduced their emissions by 24 per cent. In 2013, the Climate Check tool was introduced to Danish Arla farmers and has helped accelerate reductions. Examples show that farmers have been able to reduce their emissions by up to 4 per cent annually after using the Climate Check. The tool uses the internationally recognized methodology for carbon footprint calculations at farm level developed by the International Dairy Federation.

Areas measured in the Climate Checks: Number of animals, feed composition, crop production, use of fertilizer, manure handling, use of electricity, fuel and renewable energy.

Carbon sequestration (capturing and storing carbon in the soil) is currently not included in the Climate Check. Arla is part of a project called C-Sequ with other dairy and livestock organisations to develop an internationally recognised and globally adopted carbon sequestration calculation method.