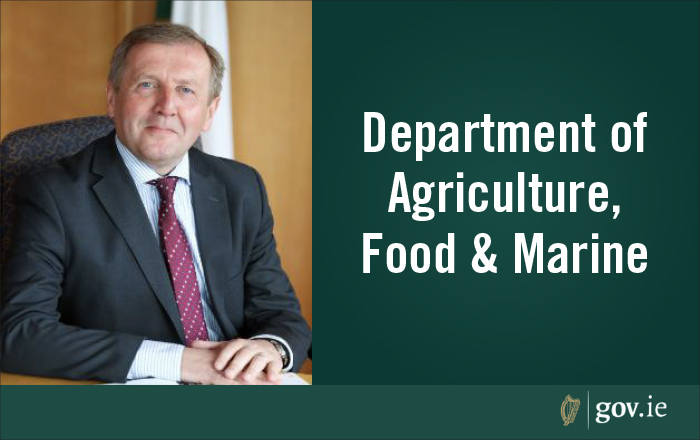 Payments to farmers for 2019 Scheme commencing this week

The Minister for Agriculture, Food and the Marine, Michael Creed T.D., welcomed the Hen Harrier Monitoring report for 2019 which is showing a 35% increase on the 2017 figure in the number of young hen harriers fledged.  The 81 chicks fledged this year is the highest such number in 14 years. The Hen Harrier Project funded by the Department of Agriculture, Food and the Marine has contributed to this success.  This Project is a locally-led, locally-designed and locally-administered scheme, funded under the DAFM’s Rural Development Programme. Hen Harrier monitoring was carried out by the Golden Eagle Trust working with the Hen Harrier Project team.

The report was presented to Minister Creed by the Hen Harrier Project Manager, Fergal Monaghan who also updated on the progress of the project. Speaking after the presentation the Minister said “I was delighted to see the increase in fledged hen harrier chicks this year. The considerable investment by my Department in the Hen Harrier project, and particularly the actions of the 1,524 participating farmers have contributed to this achievement. Together these participants manage over 37,000 hectares across all 6 Special Protection Areas and make a huge contribution to this biodiversity priority. Their actions in providing improved quality habitat for the birds have led to an improvement in the breeding success of the hen harrier population. The overall situation is still critical and there is no room for complacency, but we are moving in the right direction.”

Minister for Culture, Heritage and the Gaeltacht, Josepha Madigan T.D., also welcomed the substantial increase in fledging hen harrier in 2019; “I am  looking forward to my Department’s continuing  involvement in the Hen Harrier Project and other initiatives to improve the conservation status of the species. I note that the forthcoming Hen Harrier Threat Response Plan, currently being finalised by my Department in consultation with the Department of Agriculture Food and the Marine, the Department of Communications, Climate Action and Environment and the Department of Housing, Planning and Local Government, will set out actions for all sectors aimed at improving the long term prospects of the species.”

Minister Creed also welcomed the commencement of 2019 habitat payments to farmers under the Hen Harrier Programme. Some 1,500 participating farmers will be receiving approximately €3 million in payments between now and the end of the year.

Minister Creed concluded stating, “these locally-led projects are one of the real success stories of our Rural Development Programme and I congratulate all the projects on their ongoing good work. I would encourage all stakeholders to engage in the consultation process currently underway to prepare for the next Common Agricultural Policy, and help shape the future of locally-led schemes and agri-environment policy”.