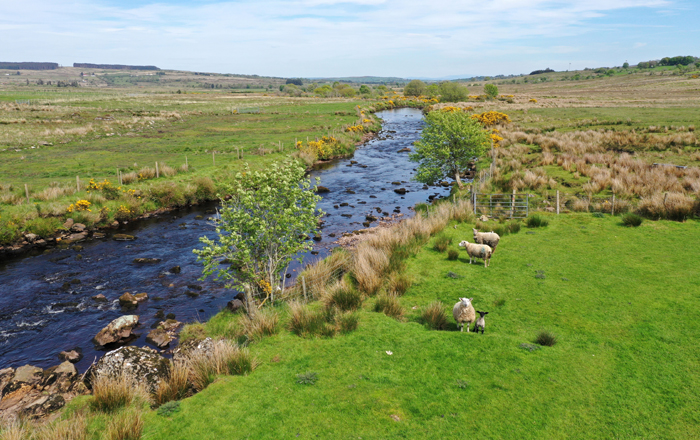 The pilot Scheme is part of the Source to Tap Project, which is supported by the European Union’s INTERREG VA Programme and managed by the Special EU Programmes Body (SEUPB), with support from the Department of Agriculture, Environment and Rural Affairs (DAERA) in Northern Ireland and the Department of Housing, Planning, and Local Government (DHPLG) in Ireland. The Project is led by Northern Ireland Water and delivered in partnership with Irish Water, Agri-Food and Biosciences Institute, East Border Region, Ulster University and The Rivers Trust.

The Source to Tap team are hosting a series of information days about this scheme and are calling for the farming community in the River Derg to come along and find out more. The scheme is due to close in July 2020 but there is still time for landowners in the eligible area to apply to the Scheme. Landowners will have the opportunity to sit down with one of the project’s Officers and arrange a farm visit or get any questions answered they may have about the Scheme.

Land Incentive Scheme Information Days will be held at:

Each Land Incentive Scheme Information Day will be followed by a Source to Tap Project overview and update from 7:30 – 9:00pm each day, where the general public can hear about all the other great things the project has been doing with local school children, community groups and beyond.

In the last twelve months, 115 farms, covering just under 14,000 acres of land along the rivers and streams of the River Derg have all benefited from tailored Water and Environment Management Plans. These bespoke plans have highlighted small but significant changes that can be made on each farm that will contribute to better water quality protection and improved sustainability of the farm business. The Source to Tap project provides 100% funding, through the project’s pilot Land Incentive Scheme, which is funded through the INTERREG VA Programme managed by the Special EU Programmes Body, to put these changes in to practice.

Before it can be used for supply, all water must be treated to make it wholesome to drink. Herbicide, such as MCPA, used for controlling rushes; sediment and colour from soils and peat can run-off the land into our rivers. These can be challenging to remove during the water treatment process to meet the required EU drinking water quality standards, and also costly, for example in terms of additional energy usage. The project aims to demonstrate that simple changes to land management practices can bring about improved raw water quality as well as added environmental improvements for wildlife and people, reducing both capital and operational water treatment costs and bringing wider benefits to the environment and society as a whole.

So far 3,500 acres of weed wiping, as an alternative rush control method to boom spraying of herbicides, as well as 27 kilometres of riverbank fencing and over 50 alternative livestock watering facilities such as solar powered, mains-fed and cattle operated pasture pumps have been identified and funding offered to farmers within the scheme.

Shaun Slevin, a farmer involved in the Scheme said

‘Initially I had just thought it was a fencing grant, but after attending the launch event I was shocked to hear about the amount of soil and rush spray getting in to the water ways, and that we actually drink this water. It’s not often you come across 100% funding for anything these days, so for the opportunity to get a contractor in to weed wipe on part of my land, fence off sheughs and streams and to install drinking troughs was brilliant. Knowing that this is helping by sending less soil to the river is an added bonus. It took a while in the beginning for the Scheme to get up and running but when it did, there was a lot of help in filling the application forms and finding quotes, something that not many schemes have anymore. The project officer I dealt with was fantastic and was always there at the end of the phone and always very helpful.’

Further information about the Source to Tap Project and the pilot Land Incentive Scheme can be found at www.sourcetotap.eu