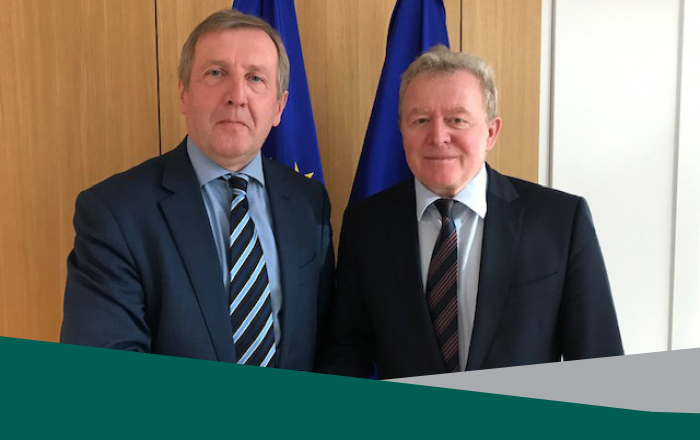 The Minister for Agriculture, Food and the Marine, Michael Creed, has again called for the increased environmental ambition of the post-2020 CAP, and of the new European Green Deal, to be matched by an appropriate budget.

Speaking during a debate on agricultural aspects of the Green Deal at today’s Agrifish Council of Ministers in Brussels, Minister Creed highlighted the importance of seeing agriculture as part of the solution to the climate change challenge.

Noting the need for a balanced approach, Minister Creed said: “Without a balanced approach for agriculture, the implications for food production in the EU, which already takes place within a regulatory framework incorporating high environmental standards, could be profound.”

The Minister highlighted a number of factors that need to be taken into account in this regard, including the need to avoid outsourcing production to countries that are less climate efficient than the EU, and the need to incentivise climate action at farm level while ensuring a just transition.

Focussing on the budgetary imperative, Minister Creed said: “we must ensure that a strong CAP budget is provided in order to ensure that relevant and effective measures are put in place. In this regard, it is difficult to see how a reduction in the CAP budget can be regarded as a just transition.”

Noting that environmental actions will cost money, and that farmers and rural communities must be adequately resourced, the Minister concluded: “It would be a body blow if the level of ambition is not matched by additional funding.”

The Agrifish Council also discussed labelling requirements for honey and animal welfare, and the proposed EU transitional rules to bridge the gap between the current CAP and the new CAP proposals.

Minister Creed also had constructive bilateral talks with Commissioner Wojciechowski on the margins of the Council. Again the focus was on the CAP budget and the European Green Deal, while other items covered included the post-2020 CAP and the transitional regulations.

During the Council meeting, Minister Creed and other EU Ministers had a lunchtime discussion with US Secretary of Agriculture Sonny Perdue. Minister Creed emphasised the importance of mutually beneficial trading and broader relationships, and noted in particular that trade difficulties of the kind generated by the Boeing/Airbus WTO dispute are ultimately in no-one’s interest.