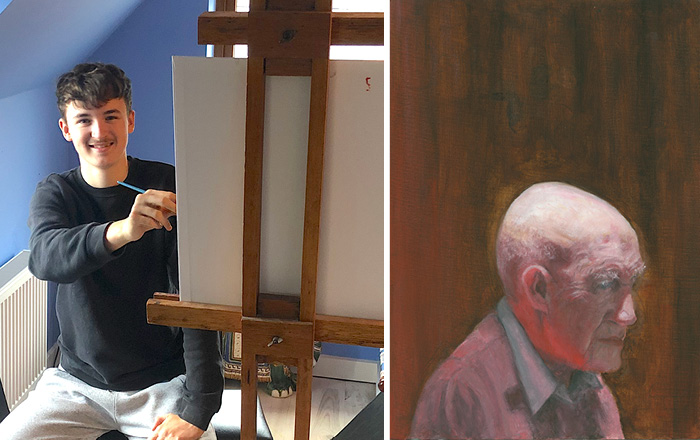 Casey Etherton, a Leaving Certificate student at Coláiste na Sceilge in Caherciveen, has been chosen overall winner of this year’s 66th Texaco Children’s Art Competition, taking first prize in the senior 16-18 years age category. His winning work, for which he receives a prize of €1,500, is entitled ‘Kevin In The Pink’ and is a detailed and carefully executed study in oils of a neighbour who lives near to his home in Caherdaniel.

In choosing it as overall prize winner in the Competition and the first prize entry in the senior Category A age group, Final Adjudicator and Chairman of the judging panel, Professor Declan McGonagle described Casey’s piece as “an exceedingly lifelike and sensitive painting in which the subject is caught in a thoughtful moment.”  Through it, Casey reveals a skill that Professor McGonagle said, “is found in the way he used light and brush marks to convey his subject so successfully.”

Youngest of two children, Casey hails from an artistic family – his father is in television production and his mother a writer and editor, while two of his grandparents were also prominent in areas of creativity, one as an author and another in art education.

Studying under the guidance of Ms. Fiona Holly, his art teacher at Coláiste na Sceilge, Casey refers to himself as one who has ‘always been drawn to art‘. Inspired by the techniques of Rembrandt, he points to portraiture as a particular interest and cites pencil and charcoal as his most frequently used mediums. His ambition is to further his interest in art through studies at third level, with the aim of building a future career in animation.

In winning the coveted overall prize and first place in the Category A age group, Casey and his fellow winners fought off the challenge from the over 25,000 young artists from across Ireland who took part in the Competition. Amongst them are the 1st, 2nd and 3rd place winners and the fifteen Special Merit awards recipients in each of seven categories for which prizes are presented, including a category reserved for special needs children.

In Category A (16-18 years)other topwinners were Róisín Long (age 18), a pupil at Sandford Park School, Ranelagh who won second prize (€1,000) for her work entitled ‘Inchydoney Beach’, and Katie Cumiskey (age 16), a pupil at Our Lady’s Secondary School, Castleblayney who won third prize (€750) for her work entitled ‘Everything But The Kitchen Sink’.

In Category B (14-15 years), first prize (€450) was won by Donegal student P. J. Doherty (age 15) from St. Eunan’s College, Letterkenny for his self-portrait. Second prize (€350) was won by Amy Zhao (age 15), a pupil at Our Lady’s Bower Secondary School, Athlone for her work entitled ‘Girl In A Jumper’. No stranger to the Competition, Amy previously won first prize in the 12-13 years age category of the 2017 Competition and a Special Merit Award in the same category in 2018. Third prize (€250) went to Sarah Mullaney (age 15), a pupil at Scoil Muire Agus Pádraig, Swinford, for her work entitled ‘Paper Face’.

In Category E (7-8 years), first prize (€200) was won by 8-year old Marc Long of Georgian Montessori School in Dublin City for his work entitled ‘Myself’. Second prize (€150) was won by Isla Gibson (age 8) from Rowandale Integrated Primary School in Moira, Co. Down for her work entitled ‘My Cousin Eve’. In 2018, Isla won a Special Merit Award in the 6 years and under category of the Competition. Third prize (€125) went to Johan Felix (age 8), from Scoil Eoin Phóil II Naofa, Tullamore, for his work entitled ‘Bee In The Flower’.

In Category G, reserved for entries from young artists of all ages with special needs, first prize of €400 was won by 14-year old James Moonan, a pupil at The Arthouse, Drogheda, Co. Louth for his work entitled ‘Darragh At The Restaurant’. In the same category, James also won first prize in last year’s Competition, second prize in 2018 and a Special Merit Award in 2017. Second prize (€300) went to Alexis Appiah (age 11), a pupil at Lusk Senior National School, Co. Dublin for a work entitled ‘The Boy In The Shadow’ while third prize (€200) went to Willow Murphy (age 15), a pupil at St. Augustine’s School, Blackrock, Co. Dublin, for a work entitled ‘Vase Of Flowers’.

Comment – James Twohig
Praising all of the winners, not least those in younger age groups and special needs categories for whom, he said, “the sense of personal achievement, pride and delight that success brings is all the more sweet.”  James Twohig, Director of Ireland Operations for Valero Energy (Ireland) Limited – the company that markets fuel in Ireland under the Texaco brand – thanked parents and the many teachers from schools throughout Ireland who, he said, “have continued to give encouragement and support to the many thousands of young artists who have entered the Competition over the course of its 66 year history.”

Interrupted this year by the onset of Covid-19, which forced a delay in bringing the Competition to a conclusion, Mr. Twohig noted that, “due to restrictions, activities normally undertaken during April and May, such as the introduction of winners to the media and the presentation of prizes, had to be set aside on this occasion. As a result, prizes will be delivered directly to the winners without the possibility of an awards ceremony.”

Ireland’s longest-running Sponsorship
The Texaco Children’s Art Competition is popularly regarded as the longest-running sponsorship in the history of arts sponsoring in Ireland, with an unbroken history that dates back to the very first Competition held in 1955. This year, as has been the case throughout its life, it has been a platform on which young artists have had their talents recognised and a springboard on which many have risen to national prominence. Aside from giving students the space to give expression to their talent and skill, the Competition has focused a spotlight on the quality of art teaching in Irish schools and the importance that the educational establishment attaches to the subject of art education.