A Moving Royal Visit For The Museum Of Literature Ireland. 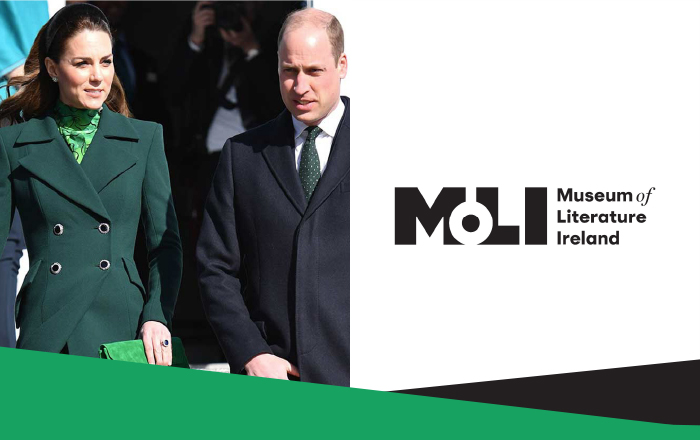 At a reception at the Museum of Literature Ireland (MoLI) this evening, the Tánaiste and Minister for Foreign Affairs and Trade, Simon Coveney T.D. welcomed the Duke and Duchess of Cambridge to Ireland. The Duke and Duchess are mid-way through their first visit to Ireland and a programme which includes political, cultural and community engagements in Dublin, Kildare, Meath and Galway.

Their Royal Highnesses the Duke and Duchess of Cambridge paid a wonderful visit to the Museum of Literature Ireland (MoLI), on the evening of Wednesday 4th March, 2020. The new museum, a collaboration between University College Dublin and the National Library of Ireland, welcomed the Duke and Duchess, both passionate readers, as part of their historic visit to Ireland. Dublin’s newest museum is located in the beautiful Newman House on St Stephen’s Green. The Duke and Duchess were welcomed this evening by Tánaiste and Minister for Foreign Affairs, Simon Coveney T.D.They were received in the museum by Professor Andrew J Deeks (President of University College Dublin), Dr. Sandra Collins (Director of the National Library of Ireland) and Simon O’Connor (Director of MoLI.)The couple spent time walking through the beautiful buildings that were the original home of UCD, hearing of the University’s founding by the British theologian, educationalist and now Saint John Henry Newman. The house exemplifies the shared history of both countries; as well as Newman’s own contributions to educational, spiritual, and literary life in Ireland, the Duke and Duchess heard how the poet Gerard Manley Hopkins lived and wrote in the house as a Professor of Classics at UCD, how James Joyce was a student in the house as well as many other renowned Irish writers such as Maeve Binchy and Flann O’Brien.The museum’s Director, Simon O’Connor, explained to the Duke and Duchess the importance of the role of female and Irish language writers in our literary heritage, and the huge focus the museum places on child education and involving children from disadvantaged backgrounds in our literary culture. The Duke and Duchess were guided to some of the museum’s most innovative displays, including the “Riverrun of Language”, a beautiful immersive artwork that presents Irish writing –in both Irish and English –from the earliest times to the present day. Colette O’Flaherty, Keeper of Special Collections at the National Library of Ireland, presented the Royal couple with an opportunity to see what is regarded as one of the most significant treasures in the Irish State collections -the famous ‘Copy No.1’ of James Joyce’s Ulysses, the very first copy printed and handed to Joyce on his birthday on February 2nd, 1922.The Duke and Duchess met with various political leaders as they walked through the museum, to attend a private reception in the ‘Aula Maxima’, MoLI’s enchanting contemporary exhibition space located in the University’s converted Victorian assembly hall. Speeches were followed with a music performance by Maija Sofia Makela, Meabh McKenna and Clara Tracey. The Duke and Duchess completed their visit with a walk through some of the older historic rooms of Newman House –one of the great Georgian gems of Dublin –before departing for Galway

At a reception at the Museum of Literature Ireland (MoLI) this evening, the Tánaiste and Minister for Foreign Affairs and Trade, Simon Coveney T.D. welcomed the Duke and Duchess of Cambridge to Ireland. The Duke and Duchess are mid-way through their first visit to Ireland and a programme which includes political, cultural and community engagements in Dublin, Kildare, Meath and Galway.

MoLI is Ireland’s newest cultural institution and as part of their visit, the Duke and Duchess of Cambridge had the opportunity to view Copy No.1 of Ulysses, perhaps the world’s most valuable modern literary artefact, and the pride of the Irish State’s literary collections. The reception also offered an opportunity for the Duke of Cambridge to share reflections on the Ireland-UK relationship, and his experiences in Ireland over the last two days.

The Tánaiste said:
“This is an important visit. We have of course welcomed members of the British royal family to Ireland before, including Prince William’s grandmother, Queen Elizabeth, in 2011, a visit which represented a watershed moment for the Ireland-UK relationship.
“I very much welcome this visit by the Duke and Duchess, their first to Ireland, and hope this will be the first of many visits in the coming years.
“The Ireland-UK relationship is powered at its core by the hundreds of thousands of people who live, work and move seamlessly between these islands every single day, building and renewing connections between us. I am glad that their programme this week affords the Duke and Duchess an insight into the depth and intensity of those connections. And I am hopeful for the future of the Ireland-UK relationship, in particular when it is marked by the warmth, mutual understanding and respect that this week’s visit does so much to enhance.”