New book remembers one of Ireland’s most devastating maritime disasters – RMS Lusitania: The Story of a Wreck. 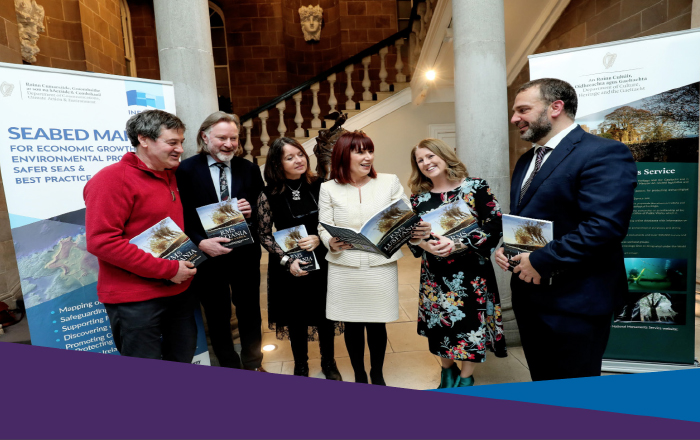 The RMS Lusitania was the largest and fastest ocean-going liner in the world when launched in 1906 – a wonder of the age. On the afternoon of 7 May 1915, a German U-boat torpedoed Lusitania 18km off the southern coast of Ireland inside the declared war zone. The liner sank in 18 minutes, killing 1,197 passengers and crew. The sinking was a contributing factor in the United States declaring war on Germany two years later. Given the dramatic circumstances of its loss, the wreck has been the subject of much investigation, research and survey work since its loss over 100 years ago and was protected by Underwater Heritage Order in 1995. Ongoing collaboration between the National Monuments Service (DCHG) and INFOMAR (Geological Survey Ireland and the Marine Institute) has being furthering research into the wreck leading to the production of this new book which not only tells the story of the ship itself but also of the World War I losses generally off Ireland’s coast. Images from newspapers, postcards, paintings, photographic collections and a variety of other sources show the impact the sinking of the Lusitania had globally.

Recent acquisition of detailed high resolution scans of the wreck carried out by INFOMAR (INtegrated Mapping FOr the Sustainable Development of Ireland’s Marine Resource) provides new imagery of how the shipwreck looks on the seafloor today. As well as drawing on expertise from the National Monuments Service’s Underwater Archaeology Unit, the Geological Survey of Ireland, The Marine Institute and the National Museum of Ireland, there are contributions in the publication from independent researchers, divers and specialists.

Pointing out that the publication reflected her Department’s commitment to creating an awareness and appreciation of heritage and archaeology in particular, Minister Madigan said

“This very readable and meticulously researched book will be an essential work of reference for all interested in heritage studies and maritime affairs for many years to come.”

“As we continue through our decade of centenaries, there are few greater tragedies to remember than the sinking of the Lusitania. Most of the 90 Irish men, women and children listed as passengers were lost when the liner went down. There would also have been many unlisted Irish working on the ship; men who had emigrated to Liverpool and found work as firemen, trimmers, stokers and greasers in the Lusitania’s boiler rooms.

“Their loss tells us of the enduring story of Ireland, of the pendulum of emigration and immigration, of people seeking better lives on one-way journeys to new lives in America or those able to visit back home, or coming home for good.”

Minister Canney commented that “For the past 20 years, Ireland’s offshore waters and coastal seas have been subject to one of the largest seabed surveys in the world. Integrated Mapping for the Sustainable Development of Ireland’s Marine Resource (INFOMAR) is Ireland’s national marine mapping programme, the follow-on project to the Irish National Seabed Survey (INSS) which began in 1999. Through INFOMAR state-of-the-art sonar imagery of the wreck of the Lusitania has been acquired creating a valuable dataset for the monitoring of this historically significant wreck site.

This collection of data along with the story of this great liner provides us with a platform to raise further awareness of the importance of our maritime history and to allow further research and analysis to be undertaken”.

Both Ministers Madigan and Canney congratulated the main authors, Fionnbarr Moore, Connie Kelleher and  Karl Brady of the National Monuments Service, Charise McKeon of the Geological Survey of Ireland and Ian Lawler of Bord Iascaigh Mhara all all the other contributors and highlighted the book as an excellent example of two government departments working in partnership to bring together expertise in archaeology, history and marine mapping while also highlighting Ireland’s leading role in seabed mapping and the promotion of our underwater cultural heritage.