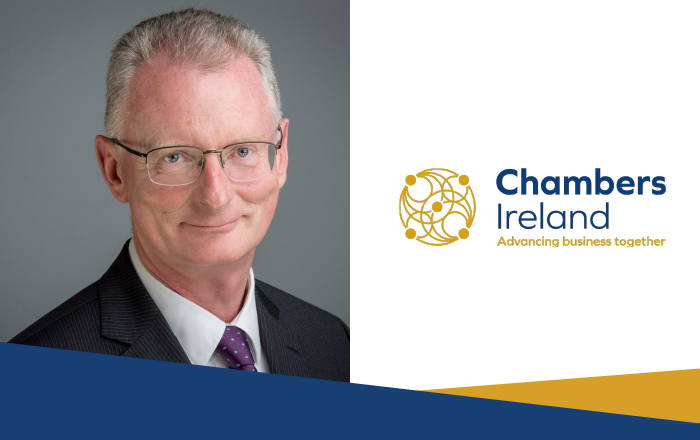 Chambers Ireland today (15 July 2020) publishes its recommendations to Government on the measures that will be necessary to protect jobs, prevent businesses from failing, and support the recovery.

Representing 40 Chambers, more than 8,000 businesses and with a geographic reach in all major cities, regions and towns, Chambers Ireland calls for Cabinet to use all resources available to reboot the economy.

“Measures introduced to date to support businesses to re-open have played a positive part in reducing some of the economic damage. In particular, the introduction of the TWSS has been extremely successful in protecting jobs and incomes, while businesses trade through the pandemic. However, it will be critical that supports like this are continued for vulnerable sectors.

The “re-opening” of the economy is a tremendously tricky task. The first Phase of lockdown ultimately involved freezing all social and economic activity. The current phase, unfortunately, is not a return to normal trading conditions, but instead is a balancing act, where we both try to live and do business around the virus, while ensuring we do everything to avoid a second wave.

Because of this, the possibility that COVID-19 will result in a shallow recession with a V shaped recovery, is unrealistic. Instead, this crisis will likely affect us over a period of years rather than months.

Our series of surveys and research over the course of lockdown and the early stages of re-opening, show us how deeply COVID-19 has impacted local economies. Revenue of most businesses is about half of what it usually would be at this time of year.
The actions Government takes in the coming weeks will determine how many jobs we save and how many businesses will survive the coming months.”

Ahead of the July Stimulus, Chambers Ireland calls on Government to take several far-reaching actions, including the following:

“Our asks are not new. These are issues which have been visible since the early days of the crisis and we have consistently called for Government to intervene. Now that we have a new Government, with a new mandate, an expansive, ambitious program of supports must be introduced.

In the early days of the COVID-19 outbreak, most economic activity was required to halt, which caused what we referred to as a mini-ice age. This decision, although the right one, has an economic cost.

If Government does not continue to intervene in a meaningful way, with a package totalling billions of euro, then it is quite probable that huge numbers of jobs and job creators will be lost to the economy. If the State intervenes, we have a much better chance of protecting local economies all over the country. Without such an intervention, the economic outlook is bleak.”