A €72 million fund for social innovation and almost 1,000 people now employed due to innovations backed by Rethink Ireland since 2016 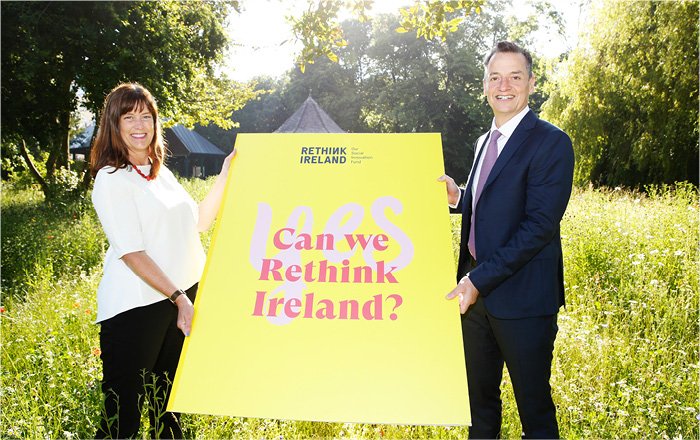 A €72 million social innovation fund has been created by Rethink Ireland since 2016, helping almost 1,000 people to overcome barriers to gain employment, and creating over 500 jobs. Today (22.06.2021) Rethink Ireland, the non-profit organisation which provides cash grants and business supports to charities and social enterprises, launched their Five-Year Impact Report, highlighting their investment as well as launching their Manifesto for the future.

According to the report, since 2016 Rethink Ireland has:

Launching the report today, the Taoiseach Micheál Martin said, “The pandemic has presented many challenges over the last fifteen months. One of the lessons we have learnt is that we need inclusive and sustainable approaches to the challenges facing our society. Innovation and new ways of problem solving will be required in the post Covid-19 future. And the many projects supported by Rethink Ireland demonstrate this in action.’’

Rethink Ireland also unveiled the evaluation results of their three-year €7.5 million Education Fund, carried out by the UNESCO Child and Family Research Centre at NUI Galway. The evaluators used a Social Return on Investment framework to measure social value created which is  not traditionally reflected in financial statements. The measurement tool demonstrates that our Education Fund investment into 7 Awardees delivered a return on investment ratio of 1:12 meaning that for every one euro we invested in these Education projects, a social return on investment of €12 was achieved.

Not only did the students participating in the evaluation progress their education, they also experienced ‘a personal transformation’ evident in increased maturity, independence, confidence and a sense of achievement.

Speaking at today’s launch, Dalton Philips, Chair of Rethink Ireland, said: “The past five years have been a period of impressive growth for Rethink Ireland, as demonstrated by the key results in the report. But for Rethink Ireland, the numbers are only a part of the full impact story. We put great effort and investment into measuring the effects our work has on real lives. Who benefits from our support? What change, if any, happens, as a result? The Education Fund evaluation is an example of this in practise.’’

“Rethink Ireland is a venture philanthropy fund. This means that we exercise the same discipline and rigour you would expect of venture capital funds, searching for the most remarkable innovations to invest in. But the difference is we measure a project’s success by the social impact it generates. We are calling on philanthropists, companies, individuals and families who are interest in making smart philanthropic investments and achieving long-lasting results to get in touch with us.’’

Included in Rethink Ireland’s Five-Year Impact Report is their Manifesto – “A Vision for Ireland 2030”, which sets out their vision for an equal, just and sustainable Ireland. According to the report, Ireland has a unique opportunity to become a European leader in how to excel in the green transition, and social innovation will play a critical role in achieving this vision.

Commenting on the launch of their Manifesto, Deirdre Mortell, CEO of Rethink Ireland, said: “Our manifesto sets out Rethink Ireland’s ambitions for Ireland in 2030. Our vision is for the Irish economy to become a human economy and for a new radical equality agenda to emerge. We have less than eight years left to save our planet. The question is not – if we can do it, but how? We believe Ireland has a unique opportunity to become a leader in the green transition.’’

“This is why Rethink Ireland is not just a name to us – it’s actually a call to action. We are calling on  Irish people across the world to join us and sign our Manifesto on rethinkireland.ie.’’

Rethink Ireland’s Five-Year Impact Report can be downloaded from: www.rethinkireland.ie/reports