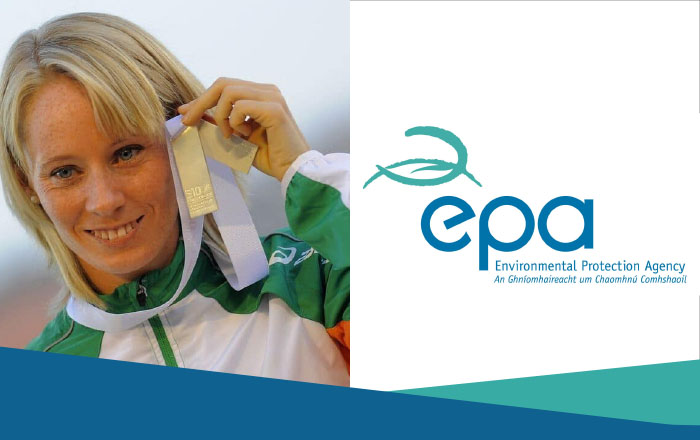 The Environmental Protection Agency (EPA) has today announced that World Champion and Olympic hurdler, Derval O’Rourke will be this year’s ambassador for its national competition for second-level students, ‘The Story of Your Stuff’. The EPA is again partnering with the UCD Earth Institute, who will host the finale showcase event on 3rd April 2020 when competition finalists and their classmates will participate in a special programme of events, and meet Ms O’Rourke who will deliver a keynote speech.

Now in its fourth year, the competition brings together curiosity, creativity and science, and aims to get young people thinking about sustainability, climate action and environmental protection, and to spread the word among their friends and family. Entrants are tasked with highlighting the environmental impact of an everyday item or activity by creatively telling its story through a visual medium.

Speaking about the announcements, Colette Ryan from the EPA lead for said:

“We are delighted to have former World Champion and Olympic hurdler, Derval O’Rourke come on board as competition ambassador this year.  Derval is an inspirational leader in her own right as former World Champion, and in her role as coach on Ireland’s Fittest Family. It is also wonderful for the EPA to be working with UCD to host the finale event of ‘The Story of Your Stuff’. The national finale celebrates the creative talent of our competition finalists and the hugely important role that young people play in safeguarding the future of this planet.”

“To be the ambassador of this year’s ‘The Story of Your Stuff’ competition means a huge amount to me. I’m aware of the objects I use on a daily basis, but often I don’t know their full story, such as where they come from, how they have been made, how sustainable they are, what their future is, and what effects they have on our environment. I’m looking forward to learning from this year’s competition entrants, and to becoming more aware and mindful of the impact our daily consumption, or daily activities can have on our environment”.

“We only have one planet and it’s important that we look after it for ourselves and future generations. Second-level students have a huge role to play in this, by informing and influencing their friends and families. I would encourage second-level students to get thinking creatively about an everyday object or activity, and to submit their entry before the deadline of 9th March.”

‘The UCD Earth Institute has brought various skills and disciplines together to try and find creative solutions to the greatest challenge that our world faces today: climate change. Partnering with the EPA on a competition which brings together science and creativity is a natural fit. We look forward to welcoming the competition finalists to the UCD O’Brien Centre for Science, introducing them to the kind of work we do here, and hopefully seeing some of them return here as third-level students in the future.”

The winners will be awarded a prize of €500 for their entry, plus a further €500 for their school. And this year the EPA’s new ‘Climate Topic Prize’ will be awarded to the entry that best addresses key climate considerations, such as carbon footprint, greenhouse gas emissions or climate action. Participants are encouraged to use the EPA’s Ireland’s Environment as a source of valuable information for their projects.
Competition guidelines and tips are available on the competition website. The deadline for entries is 9th March 2020.