Rebalancing the Island economies with energy security-Rathlin and Valentia 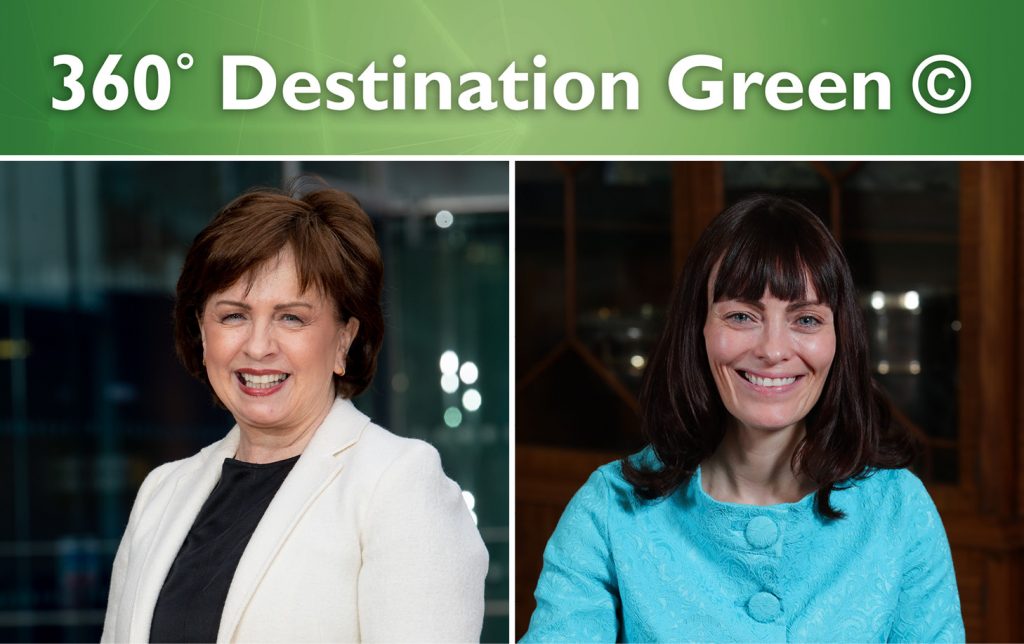 TWO Irish islands believe they can become enterprise zones, where capital allowances promote and encourage a new type of energy security. The islands in question, Rathlin in Co Antrim and Valentia in Co Kerry truly know the benefits that are possible by adopting a greener energy strategy across all facets of island life.

GenComm Project Co-Ordinator Paul McCormack stated, “The Valentia and Rathlin 360˚ Destination Green©  strategy is a full circle net zero energy approach, a catalyst for growth in all sectors towards a greener horizon. The strategy seeks to balance a sustainable and inclusive tourism demand that will be coupled with similar renewable energy, mobility and industrial strategies base on continually reducing the island’s carbon imprint and not leaving an environmental impact. This work is aimed at increasing the islands energy autonomy, delivering energy security and resulting in Rathlin and Valentia being net zero exemplars for Europe.”

Colum O Connell, Chairman of the Valentia Energy Group, said: “Yes. Here in Valentia as part of the program to achieve UNESCO recognition for the transatlantic cable, the Cable Station in Valentia is being upgraded to become a digital hub and an interpretive centre for tourism. The development of the hub has potential for the Energy Co-op to be based and grow in this environment attracting investment in new technology and academia. “

Meanwhile Michael Cecil, Rathlin Development and Community Association Chairman, spoke in a similar vein, saying: “All Islands historically are early adopters of new technology due to necessity and their location. Islands are geographically contained so impacts of emerging technology are easily measured and potentially scalable across larger land masses. Once early adoption and pilot schemes become established on smaller Islands enterprise zones will grow organically through research and ongoing development.”

On September 8 a global ‘Virtual Island Summit’ was held. Among the topics discussed were themes that included, ‘Towards Sustainable Island Futures’ and ‘Technology and Innovation Policy for Island Sustainability’. Among the speakers was Laurie Brinklow, Chair of Island Studies and Sustainability from the University of Prince Edward Island. The future of islands is now more important than ever before and being able to diversify. Michael Cecil remains undeterred in the future on Rathlin saying: “The opportunities that will grow from the Hylanders project for transport, both accessing and on the island are many and will benefit all including resident islanders as well as visitors and businesses.  A feasibility study, in partnership with one of our NI Universities, into e-vehicles for Rathlin, including hydrogen bikes, electric buses and service vehicles, a car-pool of electric vehicles is about to be commissioned.  We hope this study will highlight some ‘quick-win’ opportunities that can reinforce our commitment to the wider vision of Hylanders and strengthen our growing confidence in the process. “

In June, the Economy Minister Diane Dodds announced the creation of a new Economic Advisory Group, chaired by a former head of Ulster Bank, Ellvena Graham. Looking to a post COVID future, Ms Graham, said: “Its not just the immediacy around the options and various packages, but looking to the longer term, growth sectors, looking at the policy levers which might be needed, linked into the green recovery and skills strategy.

Michael and Colum both understand the possibility of  gaining autonomy from a larger grid with the carbon neutral energy and that they can learn from  other island experiences from around the globe. The islands can indeed build an energy co-operative and gain leverage

Michael says: “All options for our renewable energy future are on the table and will be explored fully in a robust feasibility study, shortly to go out to tender.

“Our primary focus is to increase capacity to produce energy on the island using rich natural resources of wind, wave, tidal and solar power, strengthening our energy security and making our contribution towards carbon neutrality from a small island.  The associated benefits of attracting research and commercial interest as our green credentials are strengthened will bring a synergy and open new avenues for individuals, small businesses and other.  Other islands have been driven by circumstance to develop their own autonomous grid fuelled by renewable energy, such as Eigg, in Scotland.  Rathlin has been connected to the grid since 2007 and we expect that to remain in place, not least as a means of exporting energy produced from renewable sources on the island.  Orkney and the commitment from the Scottish Government to hydrogen production is a particularly inspiring experience from which we hope to learn.

“We want our islands to be net energy producers and so to be able to export so rather than the apparent severing of links implied by autonomy we are looking for greater security within interdependence, maintaining links that can become of greater benefit to us in two way energy traffic.  “

Likewise Colum is confident of how the island energy co-op future looks saying: “Yes – we have seen this in Ireland through Tipp Energy which is one of the first community owned power projects, an independent social enterprise which focuses on driving an energy transition.”

At the September 22 GenComm webinar , ‘Industrial Sector-Coupling using a Connected eH2 cycle’, Dr James Carton, Chair of Hydrogen Ireland told how hydrogen can save the wind industry and gas industry in Ireland. Dr Carton talked of the offshore wind potential we have. The islands spokespeople are aware of this and so is the Northern Ireland Economy Minister, Diane Dodds who is on record too espousing the potential saying: “Northern Ireland has the potential to develop an enviable reputation in the global hydrogen economy with our indigenous wind resources and local talent with a proven track record in innovation.” The question is of course can the use of renewables attract commercial ventures, will groups relocate to the islands as families have. Michael Cecil explains that through ‘Hylanders’ we will see a change in the public perception of the island and the opportunities it can provide.

He says: “Rathlin has recently welcomed a few new families who have found the improvements in internet access bring possibilities for remote working. As the Hylanders project becomes more tangible it is already stimulating the interest of outside businesses to become active partners in the community’s practical commitment to a green economy.  It is logical to consider that some commercial interests will consider relocating all or part of their services to the island in the future as these opportunities become more clear.  We are keen not only to attract commercial interests and those willing to trial and test domestic and commercial opportunities through renewables and hydrogen technology in the definable, quantifiable space of a small island, but also those involved in marine research and environmental study.  Our commitment to the island as a 360° Green Destination is equally to ensuring that commercial, tourist and academic and research growth on the island is in balance with the environmental and economic needs of the community, honouring the island’s culture and heritage.”

Speaking with regard to the Valentia, Co Kerry experience, Colum says: “In Valentia we have always thought that renewable energy would be a complement to our strategy to attract new families. Valentia is a registered Chapter with Grow Remote Ireland, which is a not for profit on a mission to enable us to work, live and participate locally.”

Keeping the region as vibrant as possible is especially important to the islands and more vital than ever before. There is a fear that the Northern Ireland economy could shrink by 7.5% this year so everyone is having to think outside the box. Infrastructure Minister Nichola Mallon recently confirmed the North South Interconnector has been given planning permission. SONI, the electricity System Operator for NI welcomed the decision which it said will be a  ‘catalyst’ for the regions response to climate change, reduce consumer costs and provide a secure long term electricity supply. Both spokesmen for the islands agree that renewables growth can bring both economic and environmental payback. Colum from Valentia in Kerry says: “ For sure, The Renewable Electricity Support Scheme delivered by the government clearly identifies the value and opportunity for community led programs. There are significant incentive in this program to ensure sufficient payback.

“Given the remote nature of Valentia and the sources of our emissions, decarbonising the area is always going to be a challenge. Our vision for a hydrogen based economy lends itself nicely to finding the balance between growth and emissions reduction.”

Michael on Rathlin argues: “Locally owned and managed renewable energy production schemes will by their very existence deliver local economic benefits, if not they shouldn’t be considered unless the only goal is carbon reduction. Local schemes should encourage reinvestment in the environment , profits from renewables can facilitate local uptake of energy conservation measures rather than simply being siphoned off to shareholders.”

WIth the ‘Hylanders’ strategy the energy security is a distinct possibility not just a bold vision, Michael maintains: “Currently, as for most small islands, we are at the end of an exceptionally long supply chain which leaves our energy supplies vulnerable to any changes in logistics of transport or supply as well as cost.  As our market is so small it can be heavily dependent on commercial and political will for infrastructure security and economic accessibility. Changes in international markets and national government policies on climate change targets may mean small markets like ours, at the end of the chain, become even more fragile.  Rathlin Island, like many other islands in this latitude, is ideally suited for appropriate development of its abundant natural resources.  It would seem irresponsible, in the light of experiences with renewable energy development elsewhere, to ignore these rich opportunities on our doorstep.  “

The new Energy Strategy for Northern Ireland which extends to 2050 is a hot topic of debate right now and the islands aspirations are also a major part of the ongoing debate.