Third quarter of 2019 a big one for Irish wind industry. 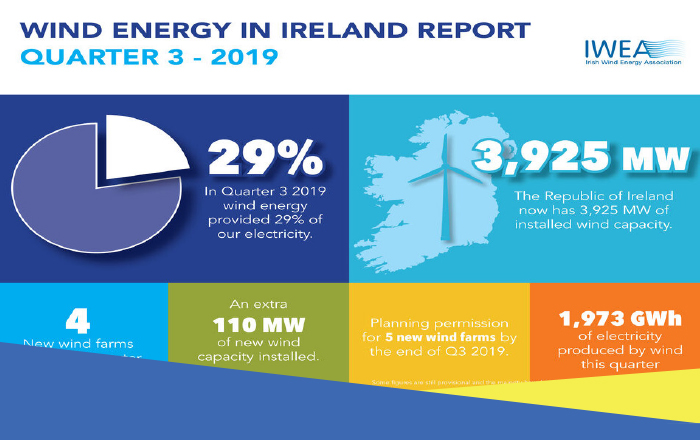 Dr David Connolly, CEO of the Irish Wind Energy Association, said: “The share of Ireland’s electricity powered by wind keeps rising and we’re on track for what could be one of our best year’s ever for completing new wind farms.

“Wind energy is an Irish success story. Every day it is driving down electricity costs for consumers, cutting CO2 emissions and guaranteeing this country real energy independence.”

Ireland’s wind fleet continues to grow with four new wind farms completed in this quarter, bring another 181 MW of renewable energy capacity online. The future pipeline is also growing and by the end of September five new wind farms with a combined capacity of 206.25 MW had got planning permission.

Dr Connolly continued: “If we are to hit our targets in the Climate Action Plan we need to be building and connecting wind farms at a record-breaking pace. We’re now confident we will break 4 GW of installed capacity by the end of the year but this leaves us only a decade to reach our 2030 objective of 8.2 GW.”

The total installed capacity of Ireland’s wind farms has now risen to 3,925 MW.

Number of new wind farms to get planning permission in the first nine months of 2019: 5 with a total capacity of 206.25 MW.

The figures in the IWEA Quarterly Report are based on data provided by EirGrid, ESB Networks, the SEAI and our own members. Some figures are provisional and may change as new data comes in.

A megawatt (MW) is a unit of power. A single megawatt is equivalent to around 1,000 kilowatts. Boiling a kettle, for example, takes around two kilowatts.

A megawatt-hour (MWh) is a unit of energy. It is normally used to refer to the amount of electricity generated or consumed. A standard Irish household would use around 4.2 MWh every year.

Wind energy is ‘dispatched down’ when wind farms are instructed by EirGrid, as the system operator, to stop generating electricity.

This is typically done due to constraints on the electricity network – the transmission system is physically unable to carry more electricity from where it is being generated to where it is needed – or to ensure system stability.