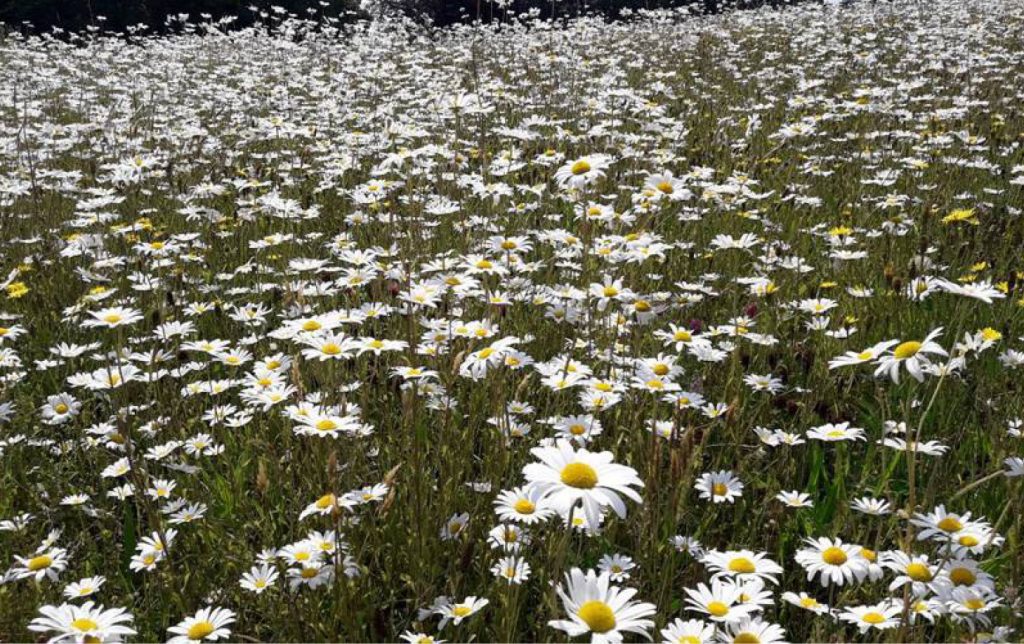 On National Meadows Day (Saturday 4 July) the National Trust has revealed that it now has over 40 hectares of land managed as wildflower meadow in Northern Ireland, the equivalent of 80 football pitches.

Much of this land was once intensively farmed fields, but thanks to the conservation charities efforts to restore natural habitats and introduce nature friendly farming practices, this land now provides a haven for wildlife, including native flowers, bees, butterflies and birds.

“Eight years ago, Ned’s Meadow in Minnowburn, just outside Belfast was an intensively managed silage field with slurry being applied and only one or two species of non-native grass growing,” explains lead ranger Craig Somerville.

“We stopped slurry applications and after a couple of years we resowed the whole field with local native wildflower seed. Following a number of years of careful management, an annual hay cut and light grazing with cows in April and again in September, Ned’s Meadow has become something really rather special. Today it’s rich with native flowers such as orchids, ragged robin, oxeye daisy and black knapweed and wild grasses such as crested dog’s-tail and sweet vernal grass.

“We’ve seen an increase in wildlife in the meadow including meadow brown butterflies, grasshoppers, hoverflies, solitary bees. Bird life too has risen, in particular we’ve seen more swallows feeding on the insects as they fly over the meadow.”

The world famous gardens at Mount Stewart are usually associated with exotic plants from all over the world but as countryside manager Andrew Upton explains, there is much more in store for visitors this summer than formal plantings: “What is really surprising for many visitors, is the wonderful wildflower meadows that can be found in the pleasure grounds and around the lake walk.

The numbers of native common spotted orchid are breath-taking. These meadows are managed by the gardens team and once the plants have flowered, the meadow is cut and vegetation removed by hand to prevent enrichment. This year, significant areas of the gardens at Mount Stewart were not mown during lockdown, due to reduced staffing and it’s been great to see these areas colonised by wildflowers and attracting numerous pollinators.”

Also part of the wider Mount Stewart demesne, the 14 acre field at Ploughman’s Hill Meadow was once used for intensively growing potatoes and barley. As part of the Trust’s work to manage land in a more nature friendly way, the decision was taken in 2018 to plant it with a native wildflower mix.

“The meadow is maturing and has become a magnet for pollinators,” adds Andrew.  “On warm and sunny days it literally shimmers with butterflies.  We mow a path through the meadow so that visitors can really appreciate it up close.”

“In an effort to restore the flora and fauna on the estate a meadow creation project got underway in 2017 and new grazing methods were introduced. Broad Meadow adjacent to Temple Water was the chosen site and the transformation has been fantastic. Over the summer visitors can enjoy a stroll through the meadow and see a rich variety of wildfowers in bloom including yellow rattle, devil’s bit-scabious and oxeye daisy.

“Last year we also supported the “Don’t Mow: Let it Grow” campaign and reduced our formal grassland mowing at Castle Ward by half. We now manage these areas as meadows and already we have witnessed a staggering amount of pollinator and butterfly activity. Butterflies like the common blue, holly blue, orange tip and green veined tip are thriving, and we also have a very healthy population of buzzards and sparrow hawks on site. Visitors have also commented that they are enjoying the less manicured, ‘wilder’ look which is great.”

According to charity Plantlife, 7.5 million acres of meadows and flower-rich grasslands have been lost across the UK since the 1930s.

This Meadows Day, the Trust is encouraging people to get involved by making their own mini meadow or identifying wildflowers in their local area. Gardening tips and a flower spotting guide can be found on the website: www.nationaltrust.org.uk

Donations to the National Trust’s nature and wildlife projects can be made at: www.nationaltrust.org.uk/donation