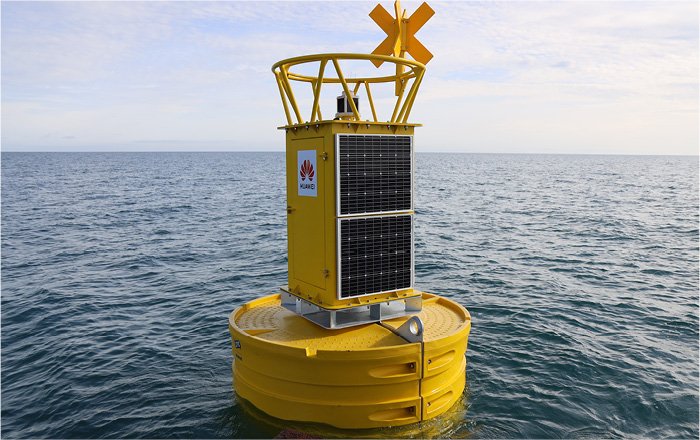 Friday, 19 March 2020. Ireland’s first real-time acoustic monitoring project of cetacean species (whales, dolphins and porpoise) began this week off the South Coast of Ireland, with the goal of creating a near real-time detection model for these species and examining the impact rising ocean noise pollution is having on Ireland’s marine life.

The Smart Whale Sounds project is being undertaken by Ocean Research & Conservation Association Ireland, a “for-impact” non-profit organisation based in Cork, in partnership with Rainforest Connection and supported by Huawei Ireland.

Following months of development, a 13ft 2 tonne specially designed data gathering buoy was deployed 9KM off the coast of Baltimore, Co. Cork for the next twelve months as part of the project.  Attached to the buoy is an autonomous hydrophone (underwater microphone) which will record whale species in real-time and train sophisticated machine learning models to identify different species calls. The data will be used to create a marine wildlife detection and classification model, which has the potential to be applied to other projects across the globe.

Ireland’s South Coast has been chosen to conduct the study as it is one of the world’s most important foraging, resting and reproductive habitats for cetacean species. Ireland is home to 25 species of resident and migratory cetaceans which account for 48% of all mammals found in Ireland, and one-third of all cetaceans found worldwide.

Commenting on the project, lead researcher Emer Keaveney, Marine Mammal Ecologist, Ocean Research & Conservation Association Ireland said: “Increased levels of marine traffic from container ships, pleasure boats, speedboats and eco-tour operators has created a significant noise pollution issue.  Sound pollution causes as much damage to marine life as overfishing, pollution and climate change, and is believed to cause behavioral changes that interfere with the health and survival of the animals. Informed estimates suggest that ocean noise levels are at least 10 times higher today than they were a few decades ago.”

The Smart Whale Sounds project will provide a much greater understanding of what is happening on Ireland’s ocean floors – specifically helping with the identification and classification of species in Irish waters, their distribution and behaviour and how noise pollution is changing these patterns. In the long-term, it could potentially lead to the development of an early warning system that will enable ships to reduce their speed in time to lessen the considerable risk of whale ship strikes.

Huawei Ireland will be providing technological support and assistance as part of its global TECH4ALL initiative. TECH4ALL is Huawei’s digital inclusion initiative, using technology, applications and skills to empower people and organisations everywhere. Smart Whale Sounds is the first TECH4ALL project to be launched in Ireland and the first to focus on ocean and marine wildlife globally.

Commenting on the launch, Tony Yangxu, CEO Huawei Ireland said: “Huawei has been a trusted partner for over 16 years in Ireland, and we are delighted to support the great work being done by ORCA Ireland. The Smart Whale Sounds project will see Ireland leading the way in using technology and data to have a greater understanding of marine life and help inform how best to manage potential marine protected areas.”

“Huawei Ireland is invested in ensuring digital inclusion goes beyond the doors of our company and reaches every corner of Ireland, and look forward to going on this voyage with the ORCA Ireland team.”

Concluding Rainforest Connection CEO Topher White said: “No matter where we look on earth, life expresses and asserts itself through sound. There’s no better way to tap into the subtlety and the essence of ecology than through how nature calls to itself.

To capture this at scale within our oceans, and harness the power of cloud-AI and big-data analysis to gather the ecological insight, is the beginning of an unprecedented era of ambitious scientific discovery and critical conservation work.”