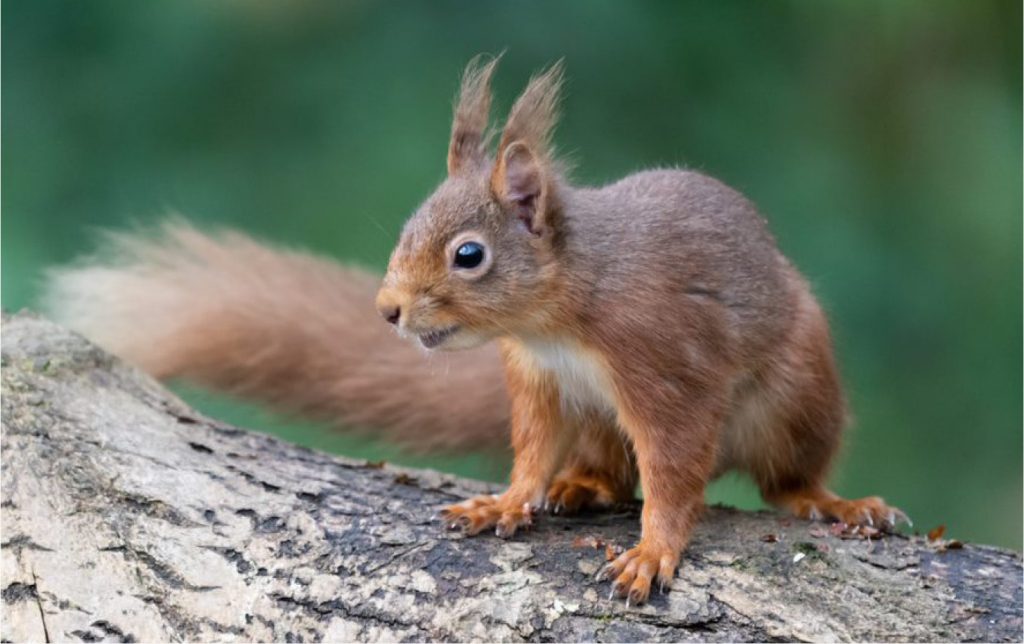 Along the Ards Peninsula the National Trust has been working in partnership with the Ards Red Squirrel Group to restore the native red squirrel population and while numbers have quadrupled since the project began at Mount Stewart five years ago, the native reds aren’t out of the woods yet.

Toby Edwards is the Area Ranger leading on this project: “At Mount Stewart we have around 40-50 reds and across the whole Peninsula we estimate there are 120 reds now, which is close to the natural capacity for the area in its current condition.  When I started in 2015 the red squirrel project numbers had dropped to as few as 10-12 following the arrival of grey squirrels around 2010. Using a number of methods including clearing non-native invasive grey squirrels, restoring wildlife corridors and supplementary feeding, the project has been successful in growing red squirrel numbers.”

2020 began with a relatively mild winter resulting in lots of early breeding activity from red squirrels, but the grey squirrels have also benefitted, resulting in a fresh tide of activity from this non-native, invasive species coming in from the North Down area.

Grey squirrels were first introduced to Ireland from North America in 1911 and rapidly spread, causing a critical drop in numbers of the native red squirrel. Now classified as an invasive non-native species, the greys continue to pose a serious threat to the red squirrel conservation project as Toby explains:

“In the last few weeks, we have seen many grey squirrels push through protected red squirrel buffer zones across the Ards Peninsula which is a real cause for concern,” Toby explains. “In the short time, if we don’t continue to take measures to protect the reds against this invasive non-native species, we will lose our population of red squirrels altogether.”

Movement of grey squirrels brings disease and habitat degradation, threatening the success of the red squirrel breeding programme and the wider woodland ecosystem.

“It just takes one grey squirrel carrying the squirrel pox virus to wipe out our population of red squirrels here,” adds Toby. “2020 is looking to be a surge year for greys so we need to grow levels of action.”

Red squirrels are a key species and play a vital role in regenerating our woodlands, burying nuts and seeds which grow into future trees. Northern Ireland is one of the least forested countries in Europe with less than 8% of woodland cover [1], so protecting reds is critical to ensure natural woodland regeneration.

The Ards Red Squirrel Group is one of 13 red squirrel volunteer groups and two NGO led project teams who work with the statutory agencies and landowners to secure the future of the red squirrel. Each of these groups works to conserve and expand the current population of red squirrels within their local area.

The National Trust, Ards Red Squirrel Group, North Down Red Squirrel & Pine Marten Group, Ulster Wildlife and DAERA are among groups calling for Ards and North Down Council to help by meeting their legal obligation to manage the invasive non-native grey squirrel species in their district.

Toby explains; “We would like to see the council take action now to put in place a management plan to control invasive species in their district. This is part of their legal obligation to protect and enhance biodiversity [2] We are ready to support them in fulfilling their obligations and urge them to act quickly to save our native reds.”

A shy and elusive species, red squirrels are easier to spot in autumn when the leaves fall from the tree canopies. In early autumn you might spot them on the ground at Mount Stewart foraging for fallen seeds to store for winter. Look out for autumn signs of activity such as nibbled pine or spruce cones and hazelnuts and listen out for their distinctive calls which sounds like a chucking.

If you would like to help the red squirrels, there are number of things you can do: