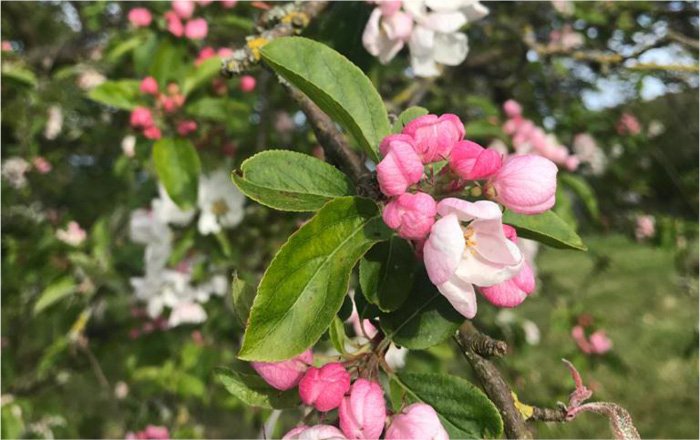 With this spring likely to be the most anticipated in living memory, the National Trust is inviting people wherever they live to emulate Japan’s Hanami – the ancient tradition of viewing and celebrating blossom – with its #BlossomWatch campaign.

The conservation charity piloted #BlossomWatch last year when the country had just entered lockdown.  And, with thousands capturing and sharing images of trees in bloom across social media platforms, and four million views in the first two weeks[1], the Trust is now making it an annual tradition, asking people to share the joy and hope that the sight of blush-tinted blooms will bring to help lift spirits and enable everyone to celebrate nature together.

A growing body of evidence suggests that moments each day noticing nature are vital for wellbeing and building a closer connection with nature, and further evidence also suggests that people derive many of the benefits from online engagement[2].  Therefore, the Trust is asking people to celebrate blossom, to ‘turn social media pink, white and green’ over the coming weeks, to mark one of ‘nature’s greatest spectacles’.

Findings in a recent YouGov poll, commissioned by the National Trust, revealed that nearly half (47 per cent) of adults in Northern Ireland said that compared to the first lockdown, they were more aware of the changing seasons.  And, nearly half (44 per cent) of adults said they have found this lockdown harder than the first, giving a heightened sense of anticipation for this coming spring.

Nature and time outdoors has continued to be the salvation for many during the recent lockdown, despite it being winter.  Just under two thirds (64 per cent) of all adults in Northern Ireland either agreed or strongly agreed that spending time noticing nature around them has made them feel happier in this current lockdown – with 72 per cent of females and 62 per cent of males finding this to be the case, with the younger adult age groups finding the most benefit (72 per cent and 71 per cent of 18-24 and 25-34 year olds, respectively)[3].

Just under two thirds (61 per cent) of adults in Northern Ireland said that watching nature from their window had helped their mood. With over one third (36 per cent) saying they are spending more time in nature and want to continue to do so when things go back to ‘normal’.

The National Trust has called for a ‘green recovery’ from the pandemic, and says that planners, policy-makers and NGOs must seize on the opportunity of increased nature connection across the population, given its proven links to people’s health and wellbeing, as the nation starts to resume pre-pandemic habits and lifestyles.

Simon Toomer, plant conservation specialist at the National Trust said: “Blossom watching is a simple pleasure that can help lift our spirits over the next few months.  It can be seen on city streets, in gardens, public parks, throughout the countryside and even out of the window, for some lucky people.

“Our recent poll revealed a massive boost in people’s everyday connection with nature since lockdowns began.  And that blossom is the aspect of nature adults are most likely to stop and notice, after the sight of a sunset, the feeling of sun on your face and birdsong[4], and is the  fourth[5] most likely natural event adults would view and share on social media, alongside sunsets, sunrises and the sea/river/stream.  It also revealed that 90 per cent of adults (85% in Northern Ireland) said they can see a tree from their window.  Even if a small percentage of these are blossom trees, we hope many will be able to enjoy this year’s blossom spectacle even from their windows.

“Hedgerow blossom typically kicks off the season with the tiny white, frothy blackthorn flowers crisscrossing the countryside before tree blossom like magnolias start to unfurl and the many varieties of delicately coloured fruit tree blossom take it in turns to bloom – from plum and damson to cherry and apple – before the finale of the white hawthorn coming into flower in May.

Commenting on the sort of displays that we’re likely to see this spring, Mr Toomer continued: “The lingering cool temperatures will tend to hold back the blossom so that when it warms up we’re likely to get an explosion.

“The recent warm few days two weeks ago brought on quite a lot of blossom but it’s still early. Winter weather itself doesn’t make too much difference as the flower buds were formed at the end of the last growing season. The biggest danger for more tender plants like magnolia is that late cold snaps can damage the flowers as they emerge.”

Building on studies into the links between nature and wellbeing, the University of Derby’s Professor Miles Richardson’s latest research with the National Trust, published in the International Journal of Wellbeing,[6] shows that it’s not the amount of time that is spent in nature that makes the biggest difference, but moments can make a real difference to feelings of wellbeing, along with simple activities.

Professor Richardson explained: “The results confirm an emerging and important finding: that connection to and simple engagement with nature brings benefits over and above those derived from simply spending a certain amount of time in nature.

“When measured alongside simply noticing nature, we found that time in nature was not a significant predictor of wellbeing.  Neither was indirect contact with nature or knowledge or the study of nature.  Nature connectedness and engaging with nature through simple activities like smelling wildflowers consistently emerged as being the significant and prominent factors in explaining mental health and wellbeing.  Therefore spending a few moments looking at and enjoying blossom can have a surprising impact on feelings of wellbeing.”

Professor Richardson continued: “Moments in nature can help people recover from the stresses and strains of the pandemic. When looking at how time, connection and noticing explain wellbeing, simply tuning into and having a close relationship with nature explained around 40 per cent of levels of wellbeing, whereas time in nature alone explained one per cent.

“There’s a need for greater public understanding that a close connection with nature is a key component of a worthwhile life, a sustainable life – a good life.”

With 15 million people in Great Britain living in ‘grey’ urban neighbourhoods with poor access to quality green spaces[7] and 83[8] per cent of people living in urban areas in England – ensuring more communities have access to green space has become even more important.

The Trust is also aiming to do more to help redress the balance.  Last month it announced its ambitions to help turn more grey areas green with its ambitions to plant dozens of blossom circles across England, Wales and Northern Ireland over the next five years.

Simon Toomer concluded: “Lockdown will make local enjoyment of blossom even more powerful this spring, because blossom is nature’s reminder that life and renewal are returning, and that there is fresh hope for people’s lives as we emerge from the worst impacts of the pandemic.

“So we urge everyone to get outdoors, safely enjoy the blossom where they live, and share their experiences with others.”

To get involved simply take and share imagery using #BlossomWatch.

The Trust is also launching a blossom map this year to record blossom sightings across the country.  For further information, to donate a tree for mother’s day, and inspiration visit www.nationaltrust.org.uk/blossom-watch