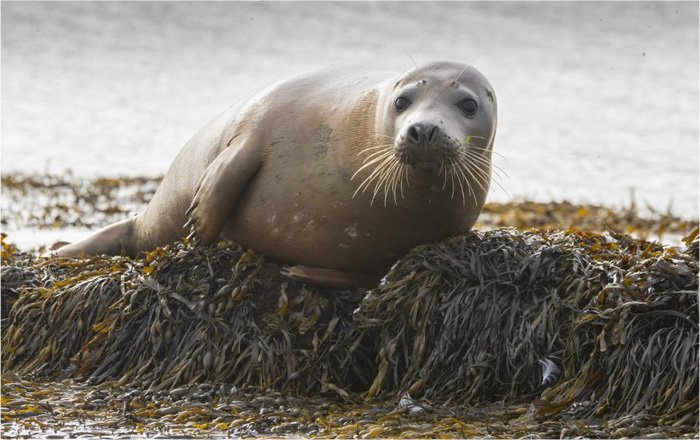 Extreme weather events including one of the hottest years on record[1] has once again had a huge impact on our wildlife in 2020 – but many species have also seen a boost due to the absence of people as a result of lockdown, the National Trust said.

Fewer people during the peak breeding season of spring has seen wildlife move in and plants thrive in locations that would ordinarily be considered tourist hotspots.

Herons were seen on the lake at Mount Stewart and badger cubs spotted playing in grounds during daylight. At Murlough Nature Reserve rangers noticed an increase in Ringed Plover nests on the beach shingle, likely due to a reduction in disturbance from visitors. Plants too were taking advantage of the quiet, with delicate forest floor species like bluebells and wood anemones flourishing.  While at the Giant’s Causeway, reduced footfall on the stones allowed the Sea Thrift or ‘Sea Pink’ to flourish among the iconic basalt columns, a rarely seen sight.

It seemed that if left alone, nature would reclaim the world around it. More evidence of this came with the news that just two yearsafter barn owl nesting boxes were introduced to the Mount Stewart estate, the team were celebrating the arrival of a breeding pair and the hatching of four barn owl chicks.

Lead Ranger Toby Edwards explains the importance of the discovery: “It’s thought that there are less than 30 pairs of barn owls in Northern Ireland, with the species having been in decline here for some time. To begin to address this on a local level, Mount Stewart has been working in partnership with Barn Owls NI and Ulster Wildlife who have been working on barn owl conservation for over 10 years in Northern Ireland.

“Since acquiring the Demesne at Mount Stewart in 2014, the Trust has introduced a number of nature-friendly farming measures that have benefitted a wide range of wildlife. The provision of barn owl boxes, retaining winter stubble and seeding bird cover margins alongside breeding locations has restored ideal conditions for barn owls to establish on the estate.”

Globally, 2020 is likely to be one of the three warmest years on record[2].  The mild winter with very little snow[3], a long dry spring followed by the sunniest and driest May on record[4] created the perfect conditions for some species to thrive, particularly certain species of birds, butterflies and moths.

Warm winds from the continent brought record numbers of migrant moths in the summer and early autumn. In August the Trust announced the first recording of False Cacao moth species in Northern Ireland at Murlough National Nature Reserve (NNR). The discovery brings the species count for moths and butterflies at the reserve to 793, the largest number of moths and butterflies recorded at a site in Northern Ireland.

Volunteer moth trapper Andrew Crory explains the significance of the spot: “Murlough NNR is at an advantage for picking up new species – it is in the south-east of Northern Ireland which means that it often picks up species moving north naturally as well as oddities that are brought by the wind from far off places. In a sense, geographically, Murlough NNR acts as a barometer for what species are going to colonise Northern Ireland.”

But despite new recordings, 2020 was a worrying year for moths and butterflies overall. Butterfly Conservation reported that 2020’s Count saw a reduction in the average number of butterflies logged per count; with a 34% decrease in numbers compared with 2019. 2020 also saw the lowest average number of butterflies logged overall since the event began eleven years ago. In Northern Ireland, a total of 1,088 counts were submitted by 720 participants. The most widely counted butterfly here was Small Tortoiseshell, with just over 1,300 counted. The species that increased the most in Northern Ireland was Small Copper with a 269% increase on 2019 figures.

Melina Quinn, Nature Conservation Adviser for the National Trust notes that: “Butterflies are an important biodiversity indicator and the Big Butterfly Count takes the pulse on the health of our natural environment. Unfortunately, the summer of 2020 was not blessed with an abundance of butterflies across Northern Ireland and this data comes shortly after the publication of two key reports [5] in 2019 which provide an authoritative evidence base that nature is in crisis.”

Autumn saw the Trust’s Strangford Lough rangers continue their seabird, seal and Brent Geese counts on Strangford Lough, all of which act as important barometers of how well nature is performing in the current climate.

The final grey seal pup count this year on Strangford Lough was 187. Six more than last year and another record count.

The Brent geese count was 26,475 birds compared to 20,9650 in 2019, so a relatively high figure helped by a relatively good breeding season swelling the population.

Unfortunately, results from the breeding seabirds counts on the Lough were more worrying with extreme weather patterns impacting numbers and breeding patterns.

“Anecdotal evidence is that breeding productivity was very poor for common and Arctic terns this year,” explains Lead Ranger Hugh Thurgate. “Sandwich terns failed completely on Dunnyneill and Black Rock (both on Strangford Lough) due to predation and on Cockle Island (outer Ards area) due to nests been washed out during high tides.”

Ben McCarthy, Head of Conservation and Restoration Ecology at the National Trust said: “We need visitors’ help in looking after terns by keeping away from sensitive areas during the breeding season and letting the terns’ nest undisturbed.  As we expect summer storms to become more frequent due to climate change, our terns need all the help they can get.”

Weather is also impacting the fortunes of the native red squirrel in Northern Ireland. Numbers have quadrupled at Mount Stewart to 40-50 and across the whole Ards Peninsula there are estimated to be around 120 reds, close to the natural capacity for the area in its current condition.

“2020 began with a relatively mild winter resulting in lots of early breeding activity from red squirrels,” explains Toby Edwards, Area Ranger at Mount Stewart. “This was followed by a warm, damp autumn with regular rainfall resulting in an extended fungi bloom that provided rich pickings for foraging wildlife such as squirrels, pine marten, hedgehogs and other mammals.”

“Unfortunately, the grey squirrels have also benefitted from favourable conditions and we’re seeing a fresh tide of activity from this non-native, invasive species. Movement of grey squirrels brings disease and habitat degradation, threatening the success of the red squirrel breeding programme and the wider woodland ecosystem.

“It just takes one grey squirrel carrying the squirrel pox virus to wipe out our population of red squirrels here,” adds Toby. “2021 is looking to be a surge year for greys so we need to grow levels of action.”

The warm summer and Covid restrictions provided an opportunity for more people to explore the nature on their doorstep but with an unfortunate outcome – unprecedented levels of litter, fly-camping and wildfires.

Trust rangers reported that the substantial increases in people fly-camping and leaving debris and litter behind at traditional beauty spots, including the Mourne Mountains, Murlough NNR and parts of the Causeway Coast, meant they were spending more time clearing up mess than protecting nature.

Despite rainfall, a record-breaking warm spring left many landscapes dry and created the perfect conditions for fires to ignite and quickly spread.

Areas at the highest risk of fire include heathland habitats in the Mournes and Divis and the Black Mountain, landscape with gorse (a thorny evergreen shrub), leggy dry grassland and some areas of scrub and woodland.

Wildfires can be devasting for the wildlife living there. Ground nesting birds such as sky lark and meadow pipit are most at risk. In the scrubby and woodland areas, song thrush, dunnock and robin are also under threat, as are the Irish hare and common lizard, found in the longer grassland areas during the summer, particularly on Divis & the Black Mountain.

Various invertebrates and caterpillars’ eggs and larvae including the rare Marsh Fritillary butterfly larvae that can be found in the dunes at Murlough NNR can also fall victim to grassland fires.

Sean Maxwell, Climate and Environment Advisor at the National Trust summarises: “Climate change is already having an impact on the wildlife of Northern Ireland and is changing the outlook for these precious landscapes and the lives that depend on them. Native species continue to find themselves in a battle with an increasingly warmer and wetter climate, volatile weather conditions and opportunistic invaders.

“We too are paying the price for a changing climate with flooding, wildfires and extreme temperature spikes becoming a common feature of our environment, threatening lives, livelihoods, and our places of natural beauty and interest.

“We, like the wildlife that calls these places home, must learn to adapt but importantly we must find solutions to preventing the worst that climate change has to offer. We can’t ‘undo’ the changes to wildlife we are already seeing at our places, but we can do everything we can to nurture nature.”

Projects that the conservation charity is currently working on to improve habitats for nature in Northern Ireland include having 890 hectares of priority habitat under restoration by 2025 (that’s the equivalent of 1,220 football pitches) and the planting of 125,000 trees which has the duel benefit of locking up carbon and providing access to woodland.

For more information on our nature conservation work or to donate to our Everyone Needs Nature appeal, visit www.nationaltrust.org.uk