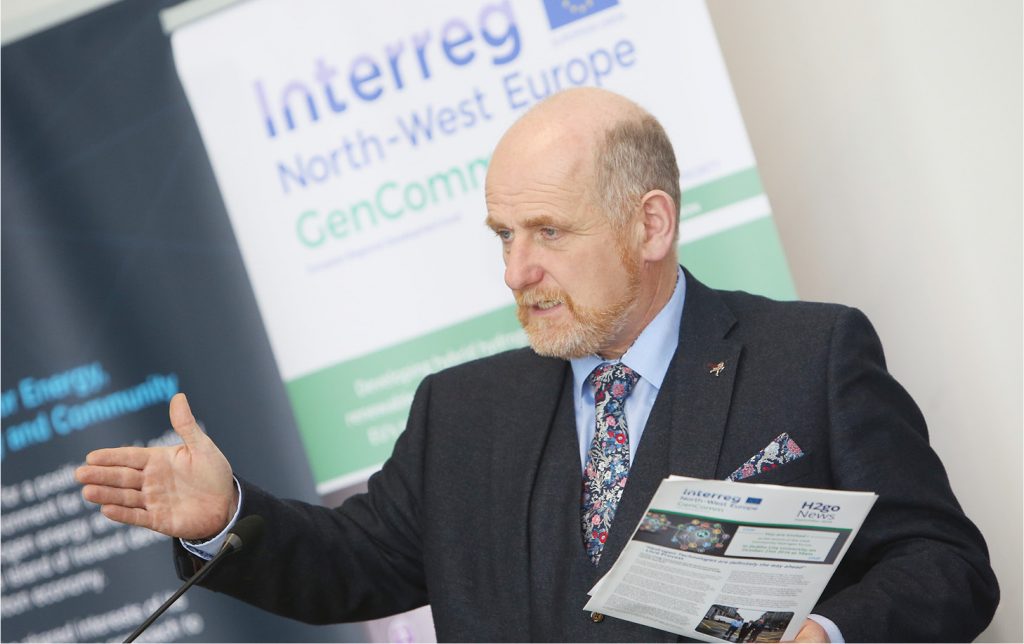 At this upcoming third webinar, Mr Ian Williamson, President of the European Hydrogen Association will speak on the topic of H2 Futures. He will be joined by Adele Brunetti from CNR-ITM who will speak on ‘H2 production in membrane reactors’. Dr Andreas Konrad  from Mecadi will speak on ‘H2 permeation testing and trace sensors. The other guest speaker is Mr Stephen Carr from University South Wales who will speak on ‘Hydrogen industrial applications fuelling industrial clusters and constructing the H2 Highway.’

Paul McCormack, GenComm Programme Manager said: “Our title this time is H2 Safety, analysis, measurements and applications. With an extensive array of stakeholders and partners we are creating a hydrogen pathway across Europe from Macedonia to Galway.

The webinars are deliberately timed to inform the growing EU H2 evolution and to coincide with the EI H2020 Green Deal calls. www.ec.europa.eu/info An energy transition disrupts the status quo and as hydrogen emerges as a new green energy source it is leading to a structural and permanent change in supply, demand, energy mix and prices.

“The energy transition to Hydrogen is currently underway leading a transformational switch away from fossil fuels and into renewable and clean sources of energy including solar, wind and water.

“In tackling climate change and the green recovery post COVID there is very much a  growing interest from academia, industry and indeed government in the value of hydrogen. Our webinar series is there to inform, signpost and publicise opportunities.

“The potential of Green H2 is compelling. Its is one of the few feasible solutions available for curbing the emissions from difficult to decarbonise sectors including industries such as steel and long distance freight transport. It could also provide a zero carbon solution for long term energy storage used for power generation to back up solar and wind power in places that suffer from long periods of low sun and wind.”

Ian Williamson , President of the European Hydrogen Association runs an energy consultancy business based in the UK and acts as a business development director for companies finding their initial business in Europe and the UK. HyEnergy brings sector expertise to bear in various EU funded projects such as Seafuel and Gencomm and prepares proposals for consortia, such as the first ever Hydrogen valley project funded by the FCH JU – the HEAVENN project. The company expanded its operations to the Netherlands last year.

Ian has over 30 years experience in industrial gases, primarily in the hydrogen energy sector having worked for Air Products. He has also CEO been of one of the few British fuel cell companies, AFC Energy, so he has wide ranging hydrogen supply and application expertise. Finally, he has been president of the European Hydrogen Association for the last 10 years.

Dr. Adele BRUNETTI , is a chemical engineer and researcher at ITM-CNR since 2012. Her main expertises are in experimental and theoretical analysis of membranes and catalytic membrane reactors for hydrogen production and CO2 conversion, long term testing, aging phenomena evaluation on polymeric membranes for gas separation, design of integrated membrane systems for gas separation. Adele is the author of more than 80 papers published in referenced international scientific journals, 20 book chapters edited by Elsevier, Wiley, Royal Society of Chemistry and has about 200 international conference proceedings, 1 book set for RSC, 1 international patent, she has participated with invited lecture and oral presentations to several international conferences. A scientific evaluator of several research projects of FWO,RCN, ISF, EU, MSCA, MISE , in 2010 she was awarded by the European Federation of Chemical Engineering –the Excellence Award in Membrane Engineering 2010 for the best recognized PhD thesis in the years 2006-2009.

Dr. Andreas Konrad is managing director of Mecadi since 2001. His scientific focus is transport through polymers, hydrogen and carbon dioxide related technologies. He got his PhD in Chemistry from Heidelberg University in 2001 working on carbon dioxide hydrogen separation with carrier membranes. Dr. Andreas  is an expert in permeation and transport phenomena and inventor in the fields of polymers, membranes and electrochemistry.

Stephen Carr is currently a research fellow at the University of South Wales, UK. He received his Mphys degree in Physics from the University of Oxford in 2004, and his PhD in energy systems modelling from the University of Glamorgan in 2010. He has worked on the UK Sustainable Hydrogen Energy Consortium (UKSHEC) Supergen project funded by the EPSRC, investigating the optimal use of hydrogen energy storage on electricity networks. He has recently worked on the CymruH2Wales project investigating renewable hydrogen systems, and the Innovate UK funded Island Hydrogen project investigating optimal operation of hydrogen refuelling systems for vehicles. He is currently involved in the Reducing Industrial Carbon Emissions (RICE) project. His research interests include electricity systems modelling, energy storage and hydrogen energy systems.