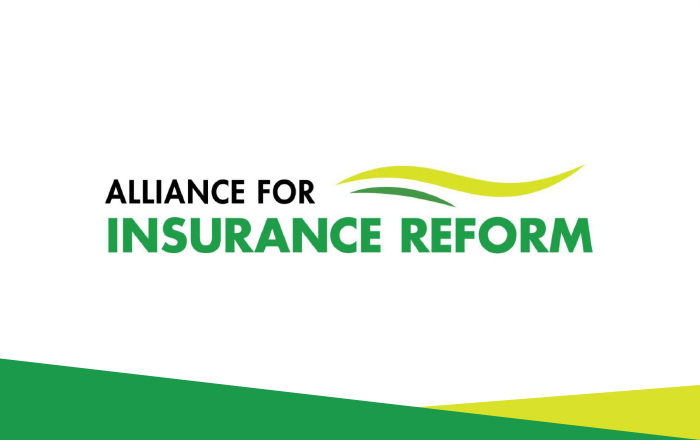 The Alliance for Insurance Reform has welcomed proposals by the Central Bank for the publication of data on liability insurance by the Bank’s National Claims Information Database (NCID), but has criticised further delays in the publication of this report announced today as well as gaps in the proposed data.

Peter Boland, director of the Alliance said “We broadly welcome the feasibility study published this morning by the National Claims Information Database unit of the Central Bank. However we have two major problems regarding the proposed report as well as broader transparency issues regarding the insurance industry.

“Firstly, the NCID Liability report was scheduled for publication during 2020. The pushing-out of the publication to the first half of 2021, over 3 years after it was first mooted by the Cost of insurance Working Group, represents a major setback for policyholders.

“Secondly, there is no mention at all in today’s study of insurers’ Income & Expenditure data as was provided in the NCID Private Motor Insurance report. It will not be possible to draw any meaningful conclusions on the state of the liability insurance market in Ireland unless at least 10 years of I&E data is supplied.

“On the broader issue of transparency, policyholders are either legally or morally obliged to have insurance. The working assumption is that the State will then supervise the industry to ensure that vested interests do not exploit this obligation. However you cannot supervise a sector in any meaningful way if you do not have the data to do so. It is astonishing how little transparency exists in such a systemically important industry and this latest delay further illustrates how little the State has done in this regard since the insurance crisis emerged.”

Other than the NCID Liability report, examples of key transparency measures not delivered or partially delivered include:

·       The long-promised Key Information Report on Liability Insurance which is now further delayed with no sign of a due date. It is currently 16 months overdue.

·       The Insurance Fraud Database, using Insurance Ireland’s InsuranceLink, is further delayed and is now over a year overdue. The mention of an independent body to manage InsuranceLink has been dropped in the latest CIWG update so we fear that this project is going backwards.

·       There has been no concrete progress on a proposed CSO liability insurance index.

·       The NCID private motor insurance report was at best partial, with only 1 year of insurers’ Income & Expenditure data. At least 10 years income & expenditure data is needed to draw meaningful conclusions in an industry as cyclical as insurance.

“It is hard not to draw the conclusion at this stage that vested interests are dragging their heels, with Michael D’Arcy, the Minister of State at the Department of Finance telling us earlier this week that ‘The requested data has not been provided by Insurance Ireland’ for the Key Information Report that was due in December 2018”.

Boland concluded “The Government and the Central Bank have been culpable in drawing a veil of secrecy over the liability insurance market since the Central Bank abolished the Blue Book in 2015. While the partial NCID private motor insurance report exposed some inconvenient truths about the money being made out of the insurance crisis by insurers and lawyers, we continue to have no transparency on liability insurance, leaving policyholders at the mercy of insurers and lawyers. Businesses continue to close down; community, voluntary, arts & cultural, sports and charity organisations continue to suffer and recovery post-COVID19 will be all the more difficult if this situation continues.”