Consumer confidence fell for the third consecutive quarter at the end of 2019. 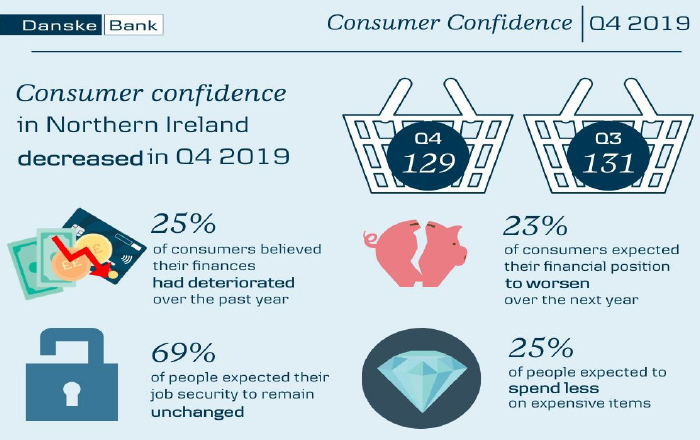 Consumer confidence in Northern Ireland fell again in the fourth quarter of 2019 as the lack of an Executive, Brexit and the impact of higher prices negatively impacted how people were feeling, according to analysis published today by Danske Bank.

The Danske Bank Northern Ireland Consumer Confidence Index fell to 129 in Q4 2019, down from 131 in the third quarter of the year but above the reading of 127 postedin the fourth quarter of 2018.

Local political uncertainty was the factor that had the most significant negative impact on confidence at the end of 2019, with 40 per cent of respondents noting the absence of devolved government as the largest drag on confidence levels. Brexit was another factor that adversely impacted how people were feeling. And 18 per cent of people selected the impact that higher prices had on their household finances as having the most negative influence on them.

Danske Bank Chief Economist Conor Lambe said:“Consumers had been pointing to the lack of an Executive as one of the biggest drags on their confidence levels since we introduced this question to our survey in the third quarter of 2017, so the return of the devolved institutions at the start of this year is undoubtedly a welcome development.

“Despite the UK now having left the EU, I believe that Brexit will continue to dampen the confidence of local people throughout this year. There is still a high degree of uncertainty around how the UK and EU will trade with each other once the transition period comes to an end, and how the Northern Ireland protocol within the Brexit Withdrawal Agreement will be applied in practice. If progress in the negotiations around these areas can’t be evidenced relatively quickly, then nervousness related to Brexit could begin to build and confidence levels could soften further.

“It is somewhat surprising to see such a large proportion of people continuing to point to the impact of higher prices as the factor having the biggest negative impact on how they were feeling, particularly given the relatively strong rate of wage growth. The latest figures show that inflation in the UK was running at just 1.3 per cent at the end of 2019, considerably below the 2.1 per cent observed at the end of 2018 and the 3.0 per cent at the end of 2017. But despite the lower headline inflation rate, prices are still increasing and local people are signalling that those rises are negatively impacting how they view their financial position.”

Conor Lambe added: “The local labour market is one bright spot from a local economic perspective. The employment rate in Northern Ireland is currently the highest on record and the unemployment rate is the joint lowest on record. The local economy has also enjoyed quarterly increases in the number of jobs from the start of 2016. This strong labour market performance has contributed to the recently observed higher rate of wage growth, which in turn has supported consumer purchasing power.”

The part of the index focused on how consumers felt about their current financial position relative to a year ago fell over the quarter, but was unchanged when compared with the fourth quarter of 2018.

Seventeen per cent of people felt their financial position had improved over the past year, but 25 per cent felt it had deteriorated.

Expectations for finances over the next twelve months

Compared with the previous quarter, there was a rise in the component of the index which examines consumers’ expectations of how their financial position will change over the next twelve months. This part of the index also improved over the year.

The part of the index that looks at job security experienced a slight rise over the quarter and over the year.

Eleven per cent of people expected to become more secure in their job, but 12 per cent expected their job security to worsen.

The part of the index that indicates the amount consumers expect to spend on high-value items over the next twelve months fell over the quarter and over the year.

The index reading related to consumers’ saving expectations increased over the quarter and over the year.

Ten per cent of people expected to save more this year than they did last year, but 22 per cent thought they wouldn’t be able to save as much over the year ahead.