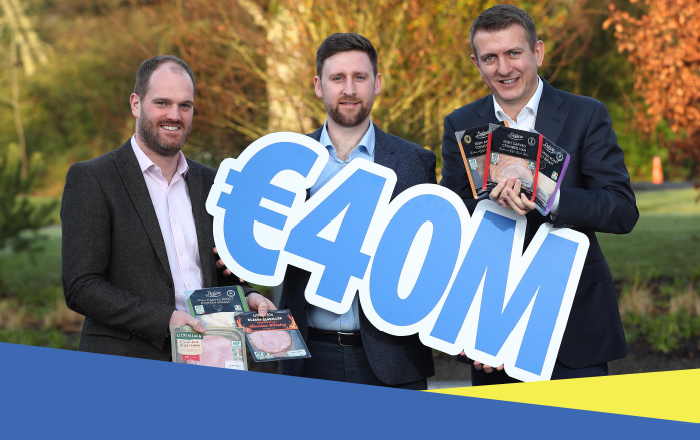 Lidl Ireland have announced a two-year supply deal with Kildare-based cooked meats producer, O’Brien Fine Foods (OBFF) worth €40 million. Lidl has also made a further €50,000 investment in O’Brien Fine Foods which will see their Irish beef produce exported to more than 3,000 Lidl stores in Germany as part of their 2020 Christmas offering.

Under the new agreement, Lidl will list O’Brien Fine Foods products in a total of 7,438 Lidl stores including those in fourteen countries outside of the UK and Ireland to include Austria, Czech Republic, Croatia, Germany, Finland, Italy, Poland, Slovakia, and Spain. A selected range of products will be available twice yearly in these countries, on a promotional basis.

As part of today’s announcement, Lidl will launch four new products as part of its own-brand cooked meat range. The new products, developed in partnership with O’Brien Fine Foods, are:

The new range is 100% Irish and Bord Bia approved and will be available in Lidl’s 201 across the island of Ireland.

O’Brien Fine Foods is one of Lidl’s over 250-strong network of Irish suppliers, In which Lidl source €1 billion worth of produce from each year.

“Supporting local Irish producers has always been a core commitment for Lidl. After 20 years of operating in Ireland, we are proud to say that this commitment continues, with Lidl now working with over 250 food and drink producers across the island.

“In terms of quality and flavour, the O’Brien Fine Foods range of cooked meat products are second to none and we are delighted that our customers in Ireland will continue to enjoy them, and that our international customers will have the opportunity to sample the best of Irish produce.”

“Lidl are proud to support Irish suppliers such as O’Brien Fine Foods. Not only do these partnerships support local communities across Ireland, but they also lead to greater innovation. An example of such innovation can be seen in the sizeable investment that Lidl have made in O’Brien Fine Foods, which has enabled the company to develop more sustainable packaging, resulting in reduced environmental impact of the range.”

A family-run business based in Timahoe, Co. Kildare, O’Brien Fine Foods supply a range of high-quality branded and own-label meat products to the Irish market, including the Brady Family, Green Farm and Homebird cooked meat ranges.

Owned by the O’Brien Family since 2000 and operating from three dedicated facilities in counties Kildare, Meath and Westmeath, the range includes 100% Irish, Bord Bia-approved pork, beef and poultry products.

O’Brien Fine Foods produce over 80% of Lidl’s sliced hams, sliced beef and poultry lines. The strong partnership with Lidl over the past ten years has enabled the company to grow their employee base from 250 to 550 employees.

“Lidl Ireland has been a long-standing partner of ours. Over the years, they have helped us to grow our business substantially and more recently, to forge a path into the UK market and fourteen other European countries.

“This commitment by Lidl will allow us to invest in and expand our operations to enable to us to increase our output of high quality ham, beef and poultry products and continue providing consumers with the 100% Irish, Bord Bia-approved cooked meat products that they know and love.

“We are grateful for their continuing support and look forward to working with them for years to come.”