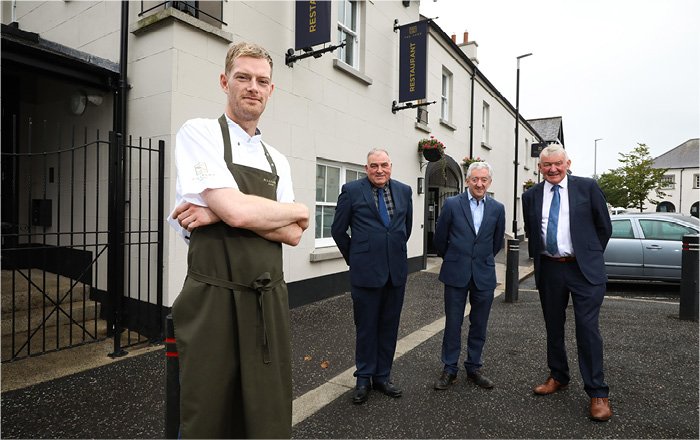 Multiple award-winning chef, Will Brown, leads the kitchen at The Yard Restaurant at Castlewellan’s Hillyard House

Anticipation surrounding one of Northern Ireland’s newest names on the hospitality map, Hillyard House, has ramped up as one of the province’s most celebrated culinary pros, Will Brown, is appointed head chef of its restaurant, The Yard.

Will has crafted a menu rich in local produce that aligns with the Farm to Fork and Foraging Strategy that supports a truly sustainable food industry here, one that is kinder on the environment and celebrates the best food on our doorstep – supporting local suppliers and working with local people.

The menu at the property, which is now open for business, includes local delicacies such as Carnlough Bay Oysters, Flax Fed Beef, Castlewellan tomatoes, Dundrum Bay Mussels, Mourne Lamb, Comber potatoes and more, all infused into dishes that accommodate the most discerning taste buds; young and old.

Will began his career at the age of 17 when he worked under Marco Pierre White at the Mirabelle in Mayfair. He returned to Belfast where he trained at Roscoff under Paul Rankin before moving to London where he worked at two Michelin-starred The Square in Mayfair, Gordon Ramsay’s Maze and The Glasshouse for Bruce Poole.

Among his high-profile diners, he can count Madonna, Guy Ritchie, Gwyneth Paltrow and Claudia Schiffer. Will also starred on the Great British Menu.

He is locally known for his gastronomical charm as head chef at his family’s award winning former business, The Old Schoolhouse in Comber.

Speaking about his new role at Hillyard House, a £3m project by Forest Park Development Group, Will said:

“I am delighted to take on the role of Head Chef at Hillyard House Castlewellan. I have recently moved to live in Castlewellan with my two sons, Harry and Jackie. It is a truly beautiful place and Hillyard House provides the perfect platform for me to excel in my career. The restaurant is stunning and I am very lucky to have some of the best produce in Ireland right on our doorstep. We source our produce locally and cook in a simple but elegant manner. Our guests can count on consistently good food using ingredients they relate to.”

Mr Brown will be supported by a team of twelve chefs and newly appointed General Manager Suzanne Kidd.

Located right beside Castlewellan Forest Park with the towering Mourne Mountains as its backdrop, Hillyard House had a soft launch just one month before the pandemic restricted trading. Today, it has fully launched every element of the property including its 20 stunningly appointed guest rooms, 90-seater The Yard Restaurant and Mrs Coleman’s Bar.

Representing an investment of £3m, Hillyard House Castlewellan has created 11 full-time and 26 part-time jobs. Its creation was supported by an offer of support of £300,000 by Invest Northern Ireland.

It enjoys close access to the charming Castlewellan Forest Park which is a haven for the outdoor enthusiast. It also benefits from close proximity to Newcastle, Co Down.

Speaking about Mr Brown’s appointment and the resumption of business, Mark O’Higgins, Operational Director at Hillyard House, said: “We are delighted to welcome Will to the team at Hillyard House Castlewellan. His appointment allows us to fully open to the public with a bang, offering the best of local food for all the family complemented by the most beautiful surroundings to be found here.

“Hillyard House is a real celebration of everything that is great about Northern Ireland. It’s a place of rest, relaxation and sustenance and indulgence for those seeking a romantic break for two or a family getaway. It really has it all and having Will as our Head Chef reinforces that we offer the best of the best in Northern Ireland. We look forward to welcoming our guests from near and far and spreading the word that Hillyard House Castlewellan is open for business.”

John McGrillen from Tourism NI added: “Hillyard House is a fantastic new addition to the Tourism Product in the Mournes area. It is ideally located at the gates of Castlewellan Forest Park to meet the needs of the growing numbers of people visiting here to explore all of the activities that are available in the park and the wider Mournes area. High quality local food and drink is now a fundamental part of our tourism offer and it is great to see Will Brown join the team here as he will provide a culinary experience to match the fantastic produce and landscape from which it comes.”