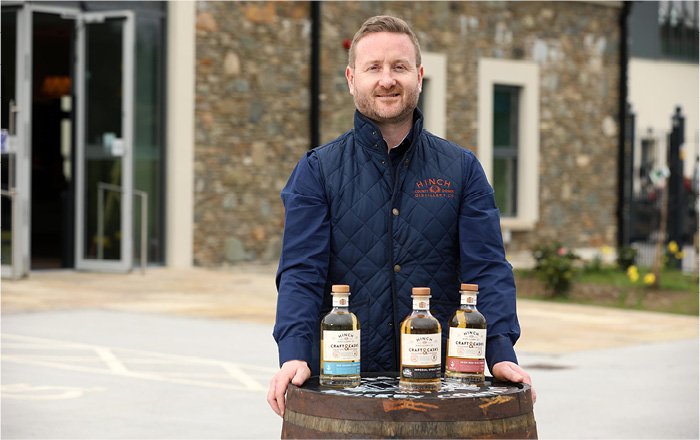 A collaboration of the craftsmanship of Hinch Whiskey and the unique flavour of the Irish craft brewing scene is a new union at Hinch Distillery, which has spawned three new whiskies.

The collection, known as Craft & Casks includes the Imperial Stout Finish, Irish Red Rye Finish and Rye Export Stout Finish which are disrupting the taste profile of the whiskey scene.

The Imperial Stout Finish hails from Co Down, sitting in the shadows of the Mourne Mountains. Its Kreme de la Kremlin Imperial Stout brings orchard fruits and butter toffee tastes to the whiskey in what the distillery describes as a “luxurious mouthfeel of light toffee, coffee, vanilla sweetness and cinnamon spice follows”.

A modern and bold move for the whiskey lovers, the launch widens the growing portfolio at the distillery.

It brings its collection of whiskeys to nine variants and follows on from the distillery’s release of an 18 year old Single Malt finished in Château de la Ligne Grand Reserve wine casks ahead of Christmas 2020.

“The union of whiskey with craft beer barrels is an emerging trend within the distilling industry and demand is surging. While Hinch is a relatively new name to the drinks’ fraternity, we have quickly risen to a par with the best around, beckoning prestigious awards in our two years of operation.

“We are a recognised player in the whiskey scene globally and we always strive to be innovative in the whiskeys we create whilst paying attention to current trends in the category.

“It’s not news to those in the whiskey business that beer and whiskey are a natural fit and the boilermaker is a classic bar order. Our Craft & Casks take that trend one step further.”

The launch comes as Hinch prepares to open its visitors centre which includes a Brasserie Bar and Restaurant, outside courtyard space, and multi-purpose events space for everything from weddings to corporate events at its 30,000 sq ft site on Killaney Estate located between Belfast and Ballynahinch.

The retail outlet is open and the distillery team will also be offering behind the scenes “Guided Tours” of the distilling operation once it is safe to do so. Fully trained guides will bring visitors on an interactive and informative journey that gives insight to both the history of Irish whiskey and its unique distilling process with tutored tasting at the conclusion of the tour.

The opening day has been postponed many times due to consecutive lockdowns and social restrictions.

Hinch Distillery Chairman Dr Terry Cross OBE said: “We have waited a long time to open our site to the people of Northern Ireland and visitors here and we look forward to that day when we can unveil what we believe is going to be a new jewel in the tourism crown here.

“Despite not being able to open our public offering fully at the distillery, we’ve continued to develop our offering, expand our portfolio, win awards and sign major deals with distributors worldwide in the shadows of what has been a very challenging economic climate and our Craft & Casks collection is just a part of this.

“The popularity of whiskeys is soaring, as too is demand for new and bold offerings, and this is exactly what this new taste profile provides. Some of the whiskey sector’s biggest household names are benefitting from this innovation drive.”

Hinch Distillery has also recently signed a deal with one of the largest independent alcohol drinks distributors on the island of Ireland, the Musgrave Group. This agreement will ensure the distillery’s range of whiskeys and Ninth Wave Gins increase their presence in both the on and off sale market locally in Northern Ireland through Drinks Inc. who are a division of the Musgrave Group.