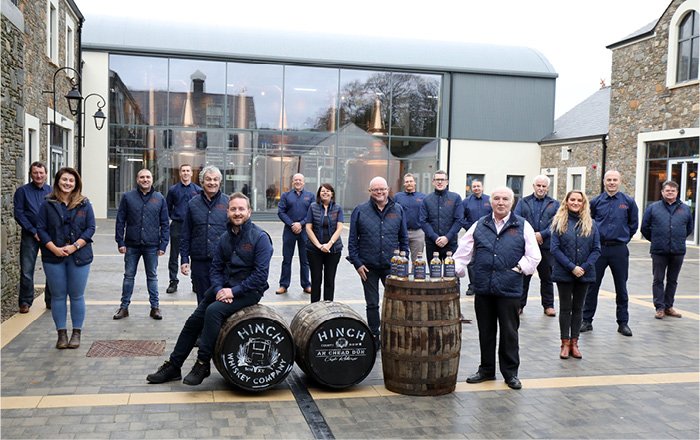 Irish Whiskey brand, Hinch, which launched its £15m distillery and visitor experience this month (November 2020) has ramped up its global exporting activity through a new partnership with German distributor, Schlumberger GMBH & Co KG, based in Meckenheim.  Schlumberger is one of Germany’s longstanding, top wine and spirits companies, representing a leading range of international spirits brands.

The business collaboration will see Hinch launched to the German market, the fourth largest Irish whiskey market in Europe, in January 2021.

Pinot Wines & Spirits, a leading, independent importer of premium international spirits, based in Lodz, Poland has been appointed as a distributor for the multi award-winning range of Hinch Irish Whiskies and Ninth Wave Irish Gin from Hinch Distillery in County Down, Ireland.

This distribution agreement will see Hinch Whiskey and Ninth Wave Irish Gin further extend their presence in the Polish market, the sixth largest Irish whiskey market in Europe, in December 2020.

The launch of the An Chead Dún cask programme coincides with Hinch Distillery’s recent opening of the distillery and a new visitor destination which will target domestic and incoming tourism.

The unique cask release contains the distillery’s first ever distillation of Irish Single Malt spirit, using traditional Irish distilling methods combined with Hinch’s bespoke distilling techniques. Each cask owner will receive a unique package which includes, amongst other benefits, a very rare bottle of Hinch 18 Year Old Single Malt, a small memento bottle of the original spirit. All bottling costs and labels are included and offer an element of personal messaging.

An Chead Dún, which translates from Gaelic as ‘The First Down’, is the first single malt spirit and ultimately whiskey, released directly from the Hinch Distillery. Speaking about the unique distillate, Hinch Distillery Chairman Dr Terry Cross OBE, said: “Hinch whiskeys are inspired by the distilling traditions and skills exchanged over the centuries during the ebb and flow of Gaelic peoples across the Irish Sea. Cask owners can expect fuller, bolder and more intense flavours from our An Chead Dún spirit. For me, it’s all about creating Irish whiskey with as much strong and individual character as possible.”