Record performance of €13bn in 2019 caps a decade of extraordinary growth for Irish Food & Drink exports. 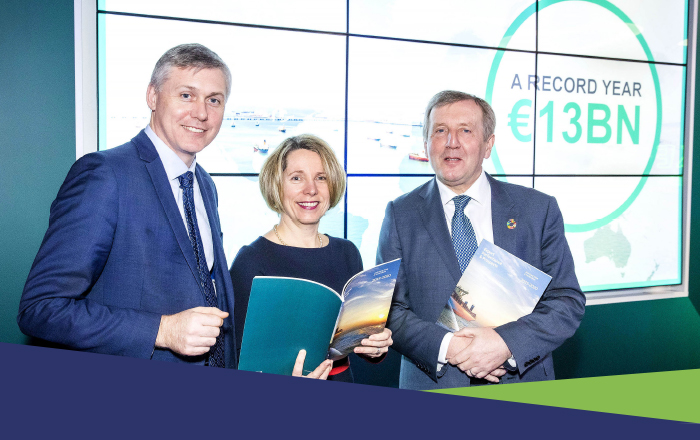 Wednesday 8th January, 2020: In the opening days of a new decade, the publication today of Bord Bia’s Export Performance and Prospects report 2019/2020 (attached) by the Minister for Agriculture, Food and the Marine, Michael Creed, TD, reveals a stand out 2019 performance by Ireland’s food, drink and horticulture industry as exports reached €13bn in 2019 (2018: €12.1bn) for the first time.  This is the highest level of exports in Bord Bia’s 25-year history and brings to a close a decade of consistent and extraordinary growth in which food, drink and horticulture exports have grown by 67%, or €5.5bn, since 2010.

Speaking at the launch of the report, the Minister for Agriculture, Food and the Marine, Michael Creed TD, said:

“2019’s record performance for Irish food and drink exports is testament to the resilience and dedication to sustainability and world class quality amongst our indigenous producers. Total Irish agri-food exports are estimated at a record €14.5 billion in 2019. This figure includes €1.5 billion in non-edible agri-food sector goods, including forestry and animal feedstuffs, which are not included in the Bord Bia figures. Bord Bia’s figures show that food and drink exports have grown by 7% to €13 billion.  It is important to acknowledge too the contribution that Ireland’s farm families have made to this export performance, and to recognise the need for the supply chain to deliver a reasonable commercial return for those upon whom the production of high quality consumer products and raw materials depends. A diversified approach to increasing our reach within the global marketplace has yielded record levels of growth with a strong performance recorded across most sectors and categories.  That said, we face into a global trading environment in 2020 which continues to be marked by volatility and political uncertainty.  My Department will continue to work with Bord Bia to support Ireland’s largest indigenous industry as it faces into both the opportunities and challenges of 2020, a year which could be instrumental in defining the next decade for the sector.”

Tara McCarthy, CEO of Bord Bia, added: “2019 was a watershed year for Ireland’s food and drink industry not only in the total value of exports achieved but also in the make-up of their destination. For the first time export levels to continental Europe exceeded exports to the UK.  This result gives further impetus to the market prioritisation work undertaken by industry, DAFM and Bord Bia over recent years.”

Bord Bia’s Export Performance and Prospects report highlights overall export growth in 2019 of 7% to €13bn, compared to €12.1bn in 2018. Growth across key categories and to priority markets has been achieved against a backdrop of an increasingly complex global trading environment. Shifting commodity prices, weakening confidence in the global economy, along with the increased use of tariffs as an expression of trade policy by the US – directly affecting Irish food and drink exports for the first time – all impacted various sectors of Irish food and drink in different ways in 2019.

2019 marks the tenth consecutive year of positive export growth for Ireland’s food, drink and horticulture sector with exports up 67%, or the equivalent of €5.6bn.

Tara McCarthy commented: “This decade of consistent and significant growth points to the resilience and innovation that underpins Ireland’s largest indigenous sector.  Nearly half of that growth, 48% – €2.7bn – came from exports to places outside of the EU and demonstrates the importance of continually looking to new horizons in Ireland’s market diversification strategy for our world class food and drink produce. This decade has seen over €2bn more worth of dairy leaving Ireland’s shores while Irish whiskey also saw a significant 370% increase in its global export footprint to be worth €727m in 2019.  China including Hong Kong is now the largest market outside of those in the EU for Irish beef with future growth anticipated in the coming years as a result of rising consumption and increasing consumer preference for high quality beef”

Irish food and drink produce is now exported to over 180 countries worldwide.  In 2019 the impact of a relentless focus on market diversification is truly evident in the broad-based global growth achieved.  EU markets accounted for 35% of exports (+1%), the UK accounted for 34% (-3%) while International markets (the rest of the world) accounted for 31% (+2%).

Diversification and driving value growth proved to be two of the defining factors for Irish food, drink and horticulture exports in 2019.  Bord Bia remains relentless in its focus on positioning the premium and quality credentials of Irish produce in export markets, particularly relevant to challenged primary producers who will be seeking to maximise value in 2020 and beyond.

In the context of the ongoing uncertainty of Brexit, Bord Bia’s analysis tool – the Brexit Barometer – continued to be a valuable resource across sectors and allowed Irish food and drink producers to avail of customized support services to accelerate Brexit preparedness and to protect and maintain their share of the important UK market.

Dairy: Maintaining its position as a pillar of Irish food and drink exports, Ireland’s dairy sector grew in value by 11% in 2019 to €4.4billion. Despite weakening commodity prices, particularly in key categories like butter, 2019 represented the third consecutive year in which the value of exports exceeded €4billion.

Reaching a value of €1.2billion, butter remained the category leader in 2019. This 13% uplift in export value of butter was achieved in the context of a decrease in EU prices, as well as some stocking forward in the US, in anticipation of the sectoral tariffs that came into effect in Q4 2019.  Increasing diversification proved fruitful for Irish cheese exporters, with an overall increase of 22% in exports derived from strong performance in continental Europe, as well as in the UK, which remains Ireland’s primary market for cheese exports. Growing consumer interest in non-domestic offerings fueled growth in the US market, whilst strengthening demand for Ireland’s cheese in China was bolstered by a growing food-services sector.

Meat and livestock: 2019 represented a mixed year for Ireland’s second pillar of exports – meat and livestock – recording a 1% decrease in value to €3.9bn. The decrease was driven by a challenging year for beef and sheepmeat while there were very strong category performance across both poultry and pigmeat.

Beef production fell by 3% in throughput, which was somewhat offset by a 1.5% increase in carcass weight, the result of better grazing conditions in 2019. Total production was 624,000 tonnes in 2019. Weakened demand for beef in the UK market contributed to a continuing tightening of Irish beef prices and an overall market decline of 7%, with the UK beef market now worth €990m to Ireland. China, when combined with Hong Kong, now represents Ireland’s largest international market for beef with a combined value of €58 million across the two territories.

Exports of sheepmeat were down 7% to €294 million, due to a combination of weakening demand and supply challenges.

As a result of extremely strong demand globally, pigmeat prices were up significantly through 2019. Irish pigmeat export values approached €1bn for the first time – FY2019 value is estimated at €941million. China’s increasing import need in pigmeat as a result of the reduction of its own domestic herd was the key driver of this price increase.

On the back of a successful diversification effort across the UK, the rest of the EU and South Africa, Irish poultry producers delivered another year of export growth, increasing by 5% to €306m.

Beverages: Spearheaded by strong growth in Irish whiskey, Irish alcohol exports increased by 8% to €1.45bn in 2019. Driven in the US by strategic positioning in the premium and super-premium segments, Irish whiskey exports grew by 11% in 2019 to €727m. The cream liqueur sector held firm with overall export sales of 7.9million cases, this is despite the challenges of US tariffs on EU dairy, coupled with increased pressure from domestic suppliers in Canada impacting the North American market. High demand and stocking-forward in the UK resulted in strong performance for cider producers in 2019, whilst beer production enjoyed 1% growth with strengthening demand in continental Europe.

Seafood: Led by Asian demand for high value products, seafood exports grew by 6% in 2019. This growth was delivered despite difficult trading circumstances marked in particular by reduced quotas and Brexit. Across the sector, Irish exports of seafood are now worth €605m, though growth by category was mixed in 2019. Oyster producers, for example, saw growth in the UK and the rest of the Europe while producers of Irish brown crab were impacted by falling Chinese demand.

Horticulture: Edible horticulture and cerealexports were up 8% to €248m in 2019.The year proved to be a challenging one for Irish mushroom producers, who account for over 42% of all Irish horticulture exports. Currency volatility, cost increases and uncertainty in the UK consumer market- the destination for almost all Irish mushroom exports – resulted in continued consolidation in the sector. Despite this, the category’s exports grew in 2019 by 4% to €104m.

Prepared Foods and Prepared Consumer Foods: Irish exports of prepared consumer foods and prepared foods – two interrelated categories that collectively capture the broad range of value added foods that are manufactured in Ireland– returned to growth in 2019 following a challenging 2018.  Exports from the Prepared Foods sector increased by 12% to €2.32bn.  Exports of Prepared Consumer Foods increased by 2% to €2.66bn, with the UK accounting for 67% of these exports.  Despite the uncertainty around Brexit, exports of prepared consumer foods to the UK rose by 1% in 2019.  Opportunities in the private label sector and growth in the enriched powders category have proven to be key engines of growth for the sector.

While the world economy is gearing towards a slowdown, shifts in consumer preferences in developing economies towards dairy and animal protein consumption and production constraints impacting across global agriculture provide reasons for cautious optimism that Irish food and drink exports can sustain its path of growth in 2020.

In the important UK market, this will be contingent on 2020 delivering a firm step forward in the Brexit debate, with consumer and economic sentiment likely to be emboldened by a clearer picture of how the future relationship between the EU and the UK will take shape.

Commenting on the prospects for Irish food and drink exports in 2020, Tara McCarthy, concluded:

“Emboldened by the extraordinary export growth achieved in the decade gone by, Bord Bia is resolutely focussed on achieving the ambitions of Ireland’s food and drink industry as we move into 2020. Under the strategic guidance of the FoodWise 20205 plan, the target for food and drink exports in 2025 is a value of €19bn.  To achieve this, we need to remain sharp in our focus, agile in the face of continued uncertainty and we must double down on reinforcing our purpose for premium.  We will face renewed and increased pressure to maintain and grow our premium on the market in the face of global turbulence arising from the outcome of Brexit, US trade policy and China’s growing geopolitical influence on how we produce and consume food. That said, our focus remains clear; to deliver broad based sustainable growth for Ireland’s largest indigenous industry and our world class food and drink producers.”