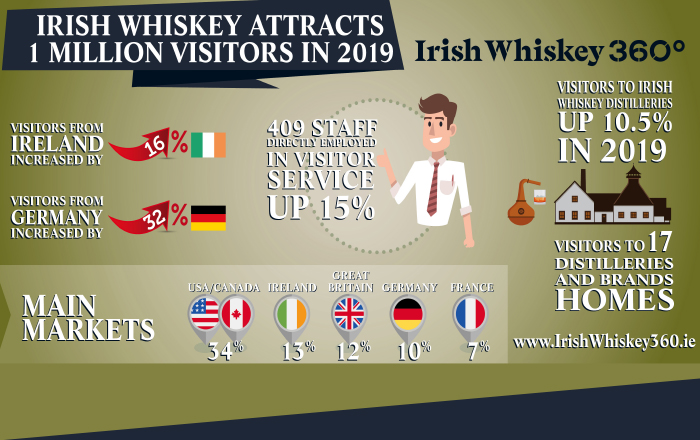 – Growth of 54% in visitor numbers over the past four years –

That’s according to Drinks Ireland | Irish Whiskey Association, which released statistics today (21.01.20) on how the Irish whiskey industry contributed to tourism in Ireland over the course of 2019.

Commenting on the figures, William Lavelle, Head of Drinks Ireland | Irish Whiskey Association, said: “In just four years, the total number of visitors to Irish whiskey distilleries and brand homes has grown by 54% – from 653,000 in 2015 to our 2019 record of 1.02 million.

“Exceeding one million visitors annually is a massive achievement and I congratulate the managers and staff of our 17 visitor attractions on achieving this milestone.  Irish whiskey distilleries and brand homes are now firmly established as a star performer within Ireland’s all-island tourism offering.  Jameson Distillery, Bow Street remains the No. 1 Irish whiskey visitor attraction; and indeed the No. 1 whiskey visitor attraction in Europe; in addition to being voted the world’s leading distillery tour for the second year running at the World Travel Awards in 2019.”

Mr. Lavelle said the continued popularity of Irish whiskey visitor experiences could be attributed, in part, to the diverse range of tourism offerings within distilleries and brand homes.

“Irish whiskey is set to be a world leader in experiential tourism,” he said.  “Many distilleries and brand homes have innovated and expanded their offerings.  We’ve seen a marked increase in blending and cocktail classes, for example, along with more ‘meet the maker’, food-pairing and seasonal special events.

“The increase in visitors last year was undoubtedly supported by the ‘Taste the Island’ food and drink tourism promotion led by Fáilte Ireland. Irish whiskey distilleries and brand homes look forward to enhancing our participation in Taste the Island in 2020.  By throwing open the doors of our distilleries, by showcasing our people, our places and our practices, we are putting our authenticity and the uniqueness of Irish whiskey on display.”

Mr. Lavelle said that, while the 2019 visitor numbers are undoubtedly positive, year-on-year trends point to potential challenges ahead.

“Future growth in visitor numbers to established Irish whiskey distilleries and brand homes will require a fresh approach to attracting visitors,” he said.  “Drinks Ireland | Irish Whiskey Association has developed the tourism-focused IrishWhiskey360° campaign to raise international awareness of the depth and diversity of Irish whiskey’s tourism offering.  We will be rolling out IrishWhiskey360° over the coming months.

“Recognising the disappointing fall-off in visitors from North America, we will be seeking to prioritise our promotional activities in the US and Canada, working closely with our state tourism agencies.  We will also continue to keep a close eye on the impact of Brexit on tourism figures.”