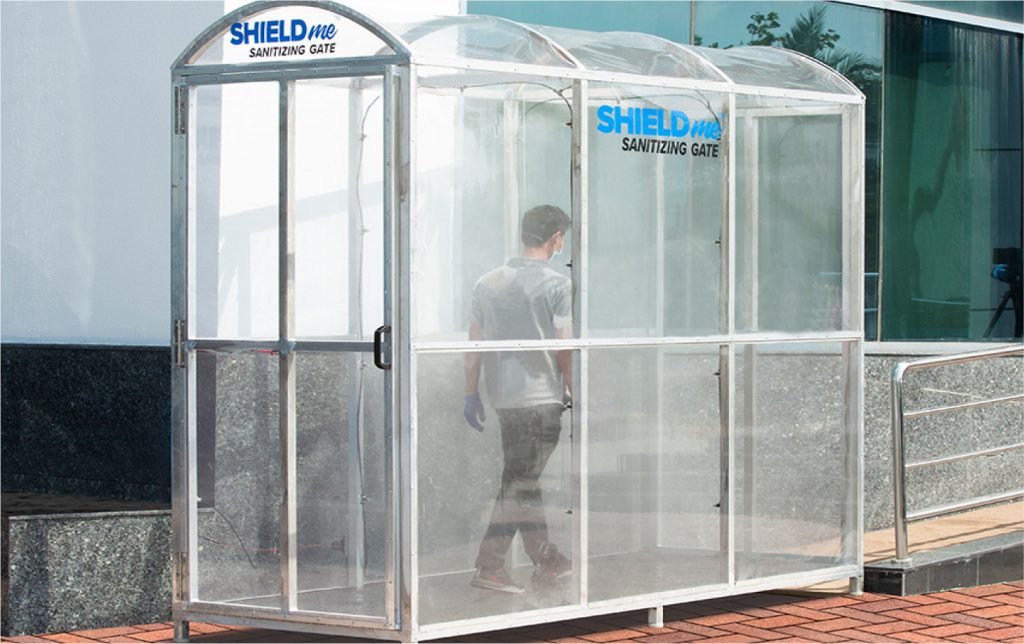 Tunnel uses anti-bacterial mist spray that can kill 99.999 percent of virus and bacteria, including COVID-19

A sanitising tunnel which can kill 99.999 percent of viruses, bacteria, mould, fungi and spores could soon be a commonplace sight in the haulage and logistics sectors, as companies add further protection for staff and worksites.

SHIELDme, which is entirely safe for human use, sprays the person passing through the tunnel with a very fine, odourless mist of anti-bacterial sanitiser which prevents any infection entering a building or other communal area. With haulage and logistics spaces frequently receiving external visitors, SHIELDme is an ideal way to ensure safety and protection.

A fogger utilising the sanitiser has also been launched, delivering a super-fine mist of SHIELDme for sanitising internal surfaces and ensuring spaces are safe.

The sanitiser is based on super oxidised water Hypochlorous (Acid HOCI) which is manufactured using 100% natural resources.  It occurs naturally in the human body when fighting off bacteria and viruses, so in effect imitates our own immune system.

It is known to be effective against all known pathogens including influenzas, E-coli, C-Difficile, MRSA and Norovirus and SARS-COV-2 (COVID-19).  It works in less than a minute.

It was originally formulated for use in use in care homes, hospitals, hospitality, leisure, catering and educational environments.

HOCI is widely accredited around the world including the International Organisation for Standardisation (ISO) and the Federal Drugs Administration (FDA) in the US for use in industries ranging from food and beverage processing, surface disinfecting and medical and dental applications.  It is compliant with all British Standards and European Norms*

The tunnel has already been installed in a number of locations including multi-temperature Oakland International in Northants and Rimstock alloy wheel manufacturers in West Bromwich.

Both the tunnel and mist spray were originally developed in Dubai by NAFFCO, one of the world’s leading manufacturers and suppliers of fire protection equipment and systems and are already being successfully used in transport hubs, factories, offices and shopping centres in the Middle East.  The franchise to sell them in the UK belongs to Trimite Global Coatings who are based in Hayes, Middlesex.

Trimite Managing Director David Roberts says: “This product has been available for six months.  But when COVID-19 arrived, we quickly saw how significant it would be if we could get these tunnels over here in a mass market way to help get people out again into communal areas with some reassurance, whether for work or leisure.

“The first tunnels underwent trials in the Middle East and we now have pilots in place across the UK. The beauty of this product is that, unlike other anti-bacterial sanitisers which need to be left in place for several minutes, this requires only a few seconds contact time to kill bacteria.  It’s also completely safe for humans as it is based on something that occurs naturally in the human body.”

It is recommended that individuals pass back through the tunnel every time they re-enter a communal space. The tunnels are modular based so dual way tunnels can be produced.

Roberts added: “We are now in discussions with a whole range of business and organisations across  the UK including education, health, government, retail, leisure and commercial sectors to look at how the SHIELDme tunnel can help them get back to normal,  giving employees and visitors the confidence to go out under current Government guidelines and know they are at significantly reduced risk of spreading the virus once they are in a communal space.”

* HOCI is widely accredited around the world including by the International Organisation for Standardisation (ISO 9001:2015) and the Federal Drugs Administration (FDA) in the US (in 2002) for use in industries ranging from food and beverage processing, surface disinfecting and medical and dental applications.  It is compliant with all British Standards and European Norms ESEN 14476, 14204, 1276, 13704, 13597 & 1656.

It undergoes rigorous ongoing quality control to ensure maximum reliability, efficiency and safety in the product.  Every new batch of product is tested.