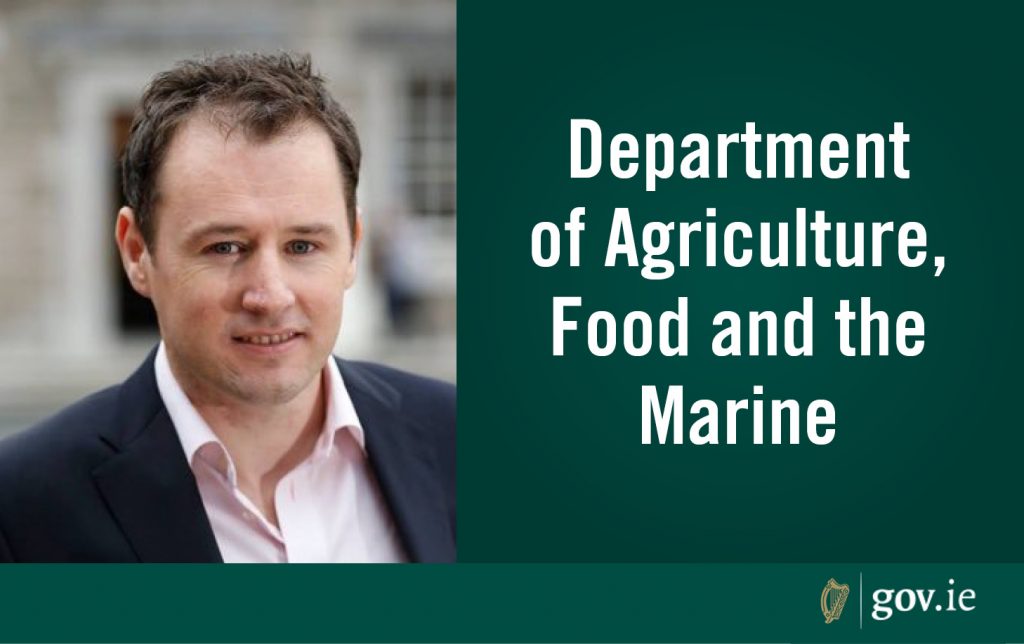 During Animal Health Awareness Week 2020, the Department will work in partnership with stakeholders to highlight the importance of good livestock health to our economy and to remind different stakeholders of the part they play in maintaining and improving the health status of our livestock.

Minister McConalogue welcomed the launch stating, “The agriculture sector in Ireland is more important than ever in the face of the twin threats of the COVID crisis and Brexit. Good animal health underpins livestock farming and the agrifood industry. Animal Health Awareness Week provides the opportunity to remind all stakeholders that our positive animal health status as a country cannot be taken for granted. It also provides an opportunity to communicate important messages on animal health to stakeholders.”

The connection between the health of animals, humans and the environment is effectively captured in the “One Health” concept. Many diseases of animals can also affect humans, or to look at it from the opposite point of view, many human diseases have reservoirs in the animal population. Good animal health contributes to public health, the profitability of individual farms as well as the sustainability of our livestock farming. It means that less greenhouse gases are produced per unit of output. Good animal health also contributes to the very high animal welfare standards found on Irish farms, and helps us to counter the threat of antimicrobial resistance.

Minister McConalogue added “The Department would like to acknowledge the contribution and engagement of a wide range of stakeholders from across the agri-food industry and the education sector, for supporting the Animal Health Awareness Week and helping to make it a success.”

The Minister continued, “Our positive animal health status cannot be taken for granted. All other things being equal, better animal health leads to better human health, especially in groups of people who work with animals such as farmers and vets. Covid-19, although a disease of humans, holds many lessons for keepers of animals in relation to biosecurity.”

Biosecurity is a vitally important tool in the national effort to prevent and suppress disease. The key role of biosecurity in delivering good animal health is underlined by the launch of Ireland’s first National Farmed Animal Biosecurity Strategy on Wednesday 25th November, as part of Animal Health Awareness Week 2020.

The Ministers of State also endorsed the Animal Health Awareness Week. Minister Martin Heydon drew attention to the importance of animal health for trade stating. “Maintaining and improving our already positive animal health status is vitally important as we seek to expand existing markets and develop new ones.”

Minister Pippa Hackett was equally positive. She said, “The link between good animal health, food production, and human health cannot be understated. Keeping our farm animals healthy, with a reduced need for animal health products, has beneficial effects on many aspects – from soil microbiology, animal welfare, and public health. Sustaining optimal animal health will benefit farmers’ pocket too, not only in terms of reduced input costs, but also because healthy animals are more productive.”

Livestock production is at the heart of our agri-food industry and contributes hugely to the development of our Regions. Sustained optimal animal health is critical to the future profitability and sustainability of our farming and processing industries, and to the protection of public health and of the environment.

What kind of events will be taking place for the Animal Health Awareness Week?

Events will take place in various locations around the country for the Animal Health Awareness Week. A full programme of events can be found on the DAFM website, www.gov.ie/en/publication/1b1d4-animal-health-awareness-week-2020/

This strategy guides and provides a framework for the development and implementation of policies and programmes towards making a lasting and continuous improvement in the health of farmed animals in Ireland. This is of direct benefit to farmers,

The National Farmed Animal Health Strategy is based on four key enabling principles. These are:

Animal Health Awareness Week builds on the key enabling principles in the Strategy. By delivering the Week, DAFM helps to secure our livestock, our people, and the livelihoods of many from the potential harms which infectious diseases can cause.

What does ‘One Health’ mean?

The ‘One Health’ concept is a worldwide strategy for expanding interdisciplinary collaborations and communications in all aspects of health care for humans, animals and the environment.  Recognising that human health, animal health and ecosystem health are inextricably linked, ‘One Health’ seeks to promote, improve and defend the health and well-being of all species by enhancing cooperation and collaboration between physicians, veterinarians, other scientific health and environmental professionals and by promoting strengths in leadership and management to achieve these goals.

What is an “exotic disease”?

An exotic disease is one which is believed not to be present in our country.

What is an endemic disease?

Endemic diseases can be thought of as diseases which are present, established or common in an animal population.

In epidemiology, an infection is said to be endemic in a population when that infection is constantly maintained at a baseline level in a geographic area without external inputs. For example, TB is endemic in Ireland but Foot and Mouth Disease is not.