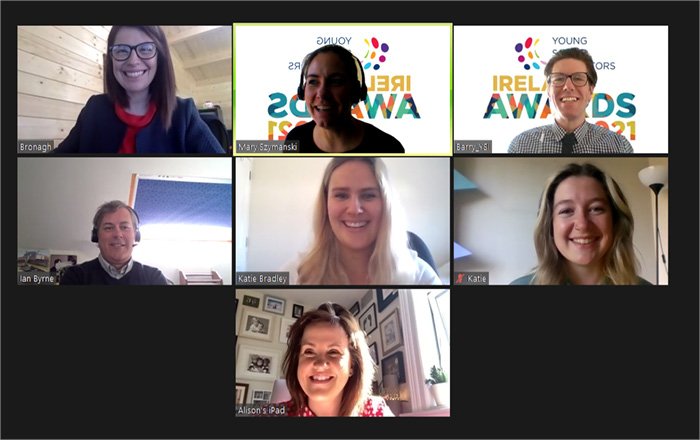 The students from Mercy Secondary School, Tralee want to encourage young people to openly discuss relationships in a safe environment. Through the use of their campaign acronym ‘D.E.T.E.C.T to P.R.O.T.E.C.T’, the students looked innovatively to shine a light on common traits in both toxic and healthy relationships to create more understanding among their peer group.

Aware that reporting of domestic abuse incidents rose in Ireland during lockdown, the team were keen to bring attention to this issue and to help young people recognise a toxic relationship at the earliest possible stage. The students are concerned that social media use and a lack of education on these issues among young people has led to an increase in online abuse and controlling behaviours facilitated through messaging platforms.

Working with Adapt Women’s Refuge in Kerry as well as Women’s Aid, the students launched their campaign aiming to ‘break the silence’ which saw them unveil an inspired relational mural for their school. The winning group also developed a specially curated SPHE lesson pack for schools, in addition to running a series of fundraisers for the associated local charities.

Killarney Community College was also honoured at the Young Social Innovators of the Year Ireland Awards with the Social Media Award, for their project The Connected Four. The goal of the project is to raise awareness around the false perception of Autism, ADHA/ADD, Dyslexia and Dyspraxia [DCD] through a printed and digital children’s book as well as a series of YouTube videos dispelling myths around these neuro-diverse conditions.

Young Social Innovators CEO and Co-founder Rachael Collier commended all of the students who participated in this year’s Annual Awards and congratulated the Kerry students saying: “This is a very special day for two schools in Kerry, Mercy Secondary andKillarney Community College. Both teams exemplify what teenagers can do when they are given the opportunity to innovate. They are bringing attention to important issues impacting young people around the use of digital technology while also using digital technology in creative and innovative ways to bring about positive change. I’d like to thank Virgin Media and their parent company Liberty Global, for their continued support and the involvement of their volunteers throughout Ireland, we are truly grateful.”

Virgin Media’s Vice President of People, Alison Hodgson, who was one of the judges and unveiled the overall winner of Virgin Media’s Digital Innovators Award, said: “Young people are well able to address their needs given the chance. Virgin Media is a proud sponsor of YSI and this category demonstrates how young people, if given a platform, can become change-makers for good in our communities.  Our purpose, building connections that really matter, drives our decision making every day. We want to use the power of our brand, our people and our connectivity to create positive change in society. Today, we stand shoulder to shoulder with YSI to celebrate excellence in youth-led innovation.”