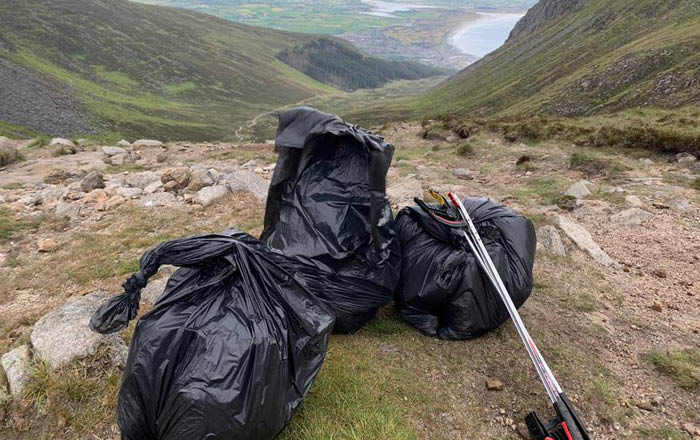 The National Trust is urging people not to bring a barbecue or light a campfire when they visit the coast and countryside, following a spate of wildfires during lockdown.

Despite recent rainfall, a record-breaking spring of sunshine has left many landscapes dry and created the perfect conditions for fires to ignite and quickly spread.

Over the last few months, the NI Fire & Rescue Service (NIFRS) have been called out to attend a number of fires on the Trust’s land including several blazes on the slopes of Black Mountain in Belfast[1]; at  Bloody Bridge in the Mournes[2] and among the sand dunes at Murlough Nature Reserve near Newcastle[3].  A fire was also started near a residential house at Islandmagee[4] but this was extinguished, thanks to the quick response of the NIFRS.

Rangers at the Trust have reported a rise in people bringing barbecues to the countryside, as extended spells of good weather have coincided with the easing of lockdown restrictions.

Areas at the highest risk of fire include heathland habitats, landscape with gorse (a thorny evergreen shrub), leggy dry grassland and some areas of scrub and woodland.

Incidences of UK wildfires are increasing in number and severity, in part due to changing weather patterns. 2019 was the worst year on record, with the unseasonably warm February and Easter contributing to blazes across the country[5].

Nesting birds are of particular risk, ground nesting birds such as sky lark and meadow pipit on Black Mountain or Skernaghan Point and in the scrubby and woodland areas, song thrush, dunnock and robin to name a few are also at risk. The Irish hare and common lizard, found in the longer grassland areas during this period, particularly on Divis & the Black Mountain, are also under threat.

Various invertebrates and caterpillars’ eggs and larvae including the rare Marsh Fritillary butterfly larvae that can be found in the dunes at Murlough NNR can also fall victim to grassland fires.

Rangers at the Trust also say litter has become an increasing issue during the relaxing of lockdown. Staff and local volunteers have helped to clear huge quantities of rubbish from sites across the country.

Craig Somerville, lead ranger for the Trust in Belfast said: “Littering levels are unprecedented at all of our countryside sites.  We are collecting around 20 bags of rubbish a week from each of our sites. This doesn’t include the incidents of fly tipping that we find at all our places – usually about one per week. In terms of staff time, across our Belfast sites, we are spending around 40 hours a week just picking up rubbish when we should be doing vital conservation work.

It’s similar story from Patrick Lynch, area ranger for the Mournes and Murlough NNR “At the beginning of June we collected an average of 15 bin bags of rubbish a day at Bloody Bridge, so that’s over 100 bags of rubbish a week that have to be lugged 750m down the bloody bridge valley.

“During the same period (29 May – 3 June) we collected about 40 bin bags of rubbish a day at Murlough Nature Reserve. We had an average of three staff members litter picking all day across those six days totalling 135 staff hours. As a conservation charity spending this type of resource simply picking up litter is unsustainable.

“We have also received some assistance with litter picking from locals and concerned members of the public and I’d like to say a huge thank you to everyone who has helped us keep these special places clean and safe for everyone to enjoy.”

With drier weather set to return this weekend, the charity is calling on those making trips to the coast and countryside not to bring a barbecue or leave litter behind.

Ben McCarthy, Head of Nature Conservation at the National Trust, said: “We know that people have missed the outdoors and open spaces these past few months – and we’re really pleased to be welcoming them back.

“But we’re urging people not to bring barbecues to the countryside or the coast. They can lead to real problems, particularly after such little rain in April and May.

“Many areas of land are still very dry and all it takes is a single spark from a barbecue or a dropped cigarette to cause a serious fire.

Ben continued: “Sadly, litter has been an issue for us for many years, but it has really ramped up lately.

“We absolutely want people to experience the beautiful natural places we look after and enjoy a picnic in the outdoors – but it’s not OK to drop rubbish and expect someone else to pick it up for you.

“Please keep hold of your litter until you find a bin, or better still, take it home with you, so we can all appreciate our natural places litter free.”

Litter not only blights the landscape but poses a threat to wildlife, which can easily become entangled or mistake it for food.

“Please think of others; think of the wildlife; think of our emergency services; and don’t bring barbecues to the beach or countryside.”

The RSPCA has received more than 21,600 reports of animals injured or caught in litter over the past five years[6].

[1] There have been a few call outs to extinguish fires on the slopes of Black Mountain, fortunately none of the fires had time to spread up and onto Trust thanks to the speed of the response by NIFRS.

[3] Fire Service attended two fires at Murlough on 20th May and 15 June.