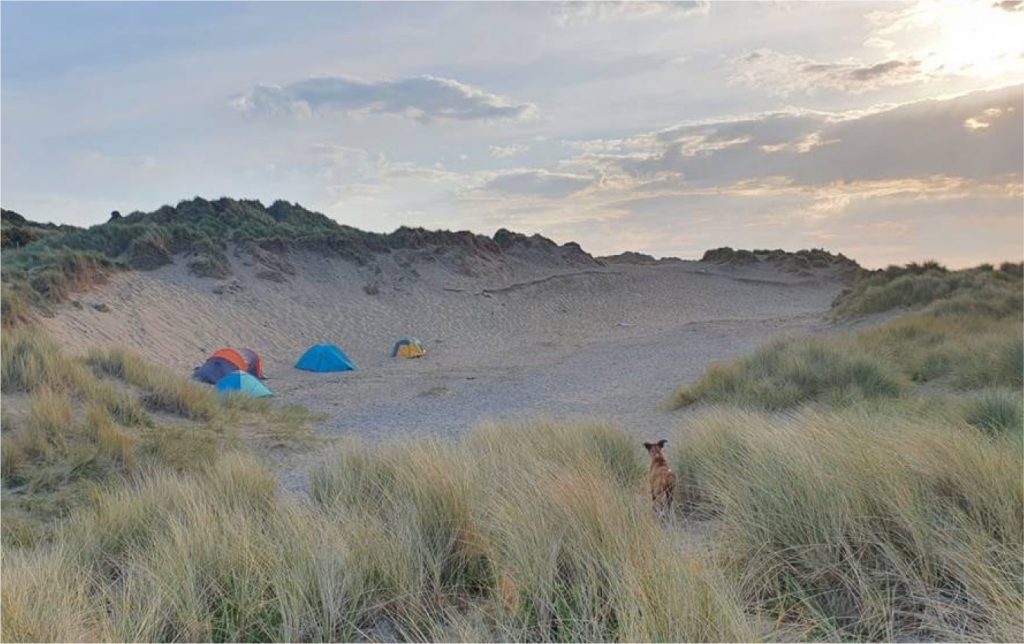 Following a dramatic increase in the amount of discarded equipment and litter being left behind at countryside and coastal locations, the National Trust is urging people not to fly-camp on its land and to help protect nature and wildlife.

With more people than ever enjoying a ‘staycation’ this summer due to the coronavirus pandemic, National Trust ranger teams are finding 20 per cent of their time is now having to be spent on clearing up after visitors rather than on vital conservation work to help nature.

Since the easing of lockdown restrictions Northern Ireland’s popular beauty spots including the Mourne Mountains, Murlough Nature Reserve and parts of the Causeway Coast have seen significant increases in the numbers of people camping, and a spike in the number of camper vans parking at beauty spots overnight, without permission.

Mourne Ranger Clare O’Reilly commented: “We have seen a notable increase in this behaviour at our sites in the Mournes – both at Bloody Bridge and Slieve Donard, and in various parts of Murlough Nature Reserve, including the main boardwalk.

“The rubbish left behind is usually substantial.  We routinely clear up to four full bin liners from each camp, and deal with the aftermath of damaged habitats from fires, broken glass and disposable BBQs. Some of this litter can be buried into the 6,000-year-old sand dunes, which then slowly release shards of glass and sharpened metal, creating a serious hazard risk for children, adults, dogs, and our wildlife.

The situation requires constant vigilance by Trust rangers whose daily patrols have turned into litter picks. In some instances, staff have been verbally abused during polite requests to have campers move on, and many campers have also illegally parked their vehicles in the car parks overnight.

Rob Rhodes, Head of Rangers at the National Trust said: “Due to lockdown we haven’t been able to get on with conservation work and many of our rangers who have returned to their posts over the past few weeks are champing at the bit to get on and start to clear the backlog.

“The sort of work we want to be doing at this time of year includes managing our flower rich meadows and caring for the wildlife that live there, and vital maintenance work to our network of paths and visitor routes.

“But this unsociable behaviour by some is taking up so much time that it’s affecting not only the upkeep of our sites, but taking our staff away from vital conservation work and engaging with visitors. Leaving debris and litter behind can cause issues for wildlife such as injuring animals and destroying habitats.

No one should have to clear up the mess that we are experiencing at some of our places.”

Ben McCarthy Head of Nature Conservation and Restoration at the National Trust said: “We have seen a huge increase in the number of people fly-camping at our places over the past few weeks, and they are leaving not only vast quantities of litter behind, but in some instances tents and much of their equipment.

“We are seeing a disposable festival mentality which we’ve not experienced at our places before.

“Some campers are also lighting campfires which can cause big problems, especially with the land still being very dry despite recent rainfall.  Campfires should not be lit at any of our countryside or coastal locations.  Fires can easily get out of control and this could have a massive impact on wildlife and landscapes.

“We know one of the few positives of lockdown has been the rise in visitors enjoying the outdoors, nature and the countryside.  And while we want to do all we can to encourage more people to spend time in nature, we all have a responsibility to leave places as we found them – for other people but also for the sake of nature itself. We want to remind people to follow the countryside code and that they should only camp overnight with a landowner’s permission.”