Consumer confidence rose in fourth quarter of 2020 amid news of coronavirus vaccines, but remained below pre-pandemic level 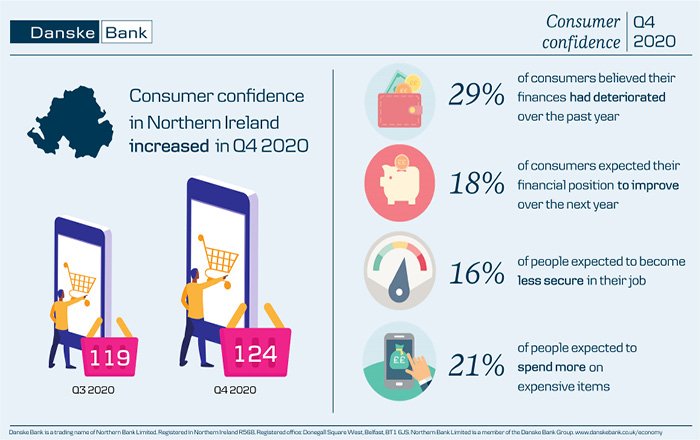 Consumer confidence levels in Northern Ireland increased in the fourth quarter of last year on the back of positive news about coronavirus vaccines, but confidence remained below the level seen before the pandemic began, according to analysis published today by Danske Bank.

The Danske Bank Northern Ireland Consumer Confidence Index increased to a reading of 124 in Q4 2020, up from 119 in the third quarter of the year, but below the index level of 129 posted in the fourth quarter of 2019. The survey was carried out in December.

Compared with the third quarter of the year people felt more confident about their current and future financial positions and the amount they expect to spend on expensive items, though expectations around job security were weaker.

As might be expected, the coronavirus pandemic continued to be a key driver of confidence levels at the end of 2020.

Asked what had the largest positive impact on their confidence levels, 44 per cent of respondents pointed to the positive news about coronavirus vaccines.

For 13 per cent of people, the restrictions put in place to limit the spread of coronavirus were viewed as a positive and a further 8 per cent of people said that government measures aimed at protecting jobs and incomes, such as the Furlough scheme, had boosted sentiment.

But the fact that the coronavirus case numbers were so high and stringent controls needed to be imposed again weighed on confidence in the final quarter of the year, with 22 per cent of people saying that coronavirus restrictions had the largest negative impact on confidence levels.

Seventeen per cent of people stated that the status of the Brexit negotiations – which were only resolved in late December – had negatively affected how they were feeling. An additional 12 per cent said that the UK Government’s longer-term Brexit objectives was the factor that most negatively impacted them.

“While the reintroduction of more stringent coronavirus restrictions in the latter part of 2020 stalled the economic recovery that had begun during the third quarter, the positive news about coronavirus vaccines provided a boost to consumer confidence at the end of the year.

“With the current restrictions requiring many businesses to remain closed, the first quarter of 2021 is proving to be another challenging one for the Northern Ireland economy. But assuming that the restrictions can be gradually eased throughout the year as coronavirus case numbers hopefully come down and the vaccine programme is rolled out further, the local economy is expected to return to positive rates of growth from the second quarter of 2021 onwards.”

TheQ42020 survey showed that twenty-four per cent of people felt their financial position had improved over the past twelve months and 29 per cent felt their finances had deteriorated. But this was relatively stronger than in the previous quarter.

Sixteen per cent of people surveyed said they expected their job security to worsen versus 7 per cent who expected to become more secure in their job.

Looking forward, consumer confidence and its impact on spending are likely to be important determinants of the speed of the economic recovery.

Conor Lambe commented: “Assuming that the coronavirus restrictions are gradually eased throughout 2021, one of the factors that will influence the speed of the economic recovery is how confident people feel and how willing they are to spend. On balance, consumers are expected to remain relatively cautious with regards to their spending decisions given the uncertainty around the pandemic, but the quarterly rise in confidence at the end of 2020 was a welcome development and it must be hoped that sentiment can improve further as we move through 2021 and help the economic recovery to really take hold.”