“2020 was actually a very good cricket year for us”: Interview with Ireland’s Gareth Delany 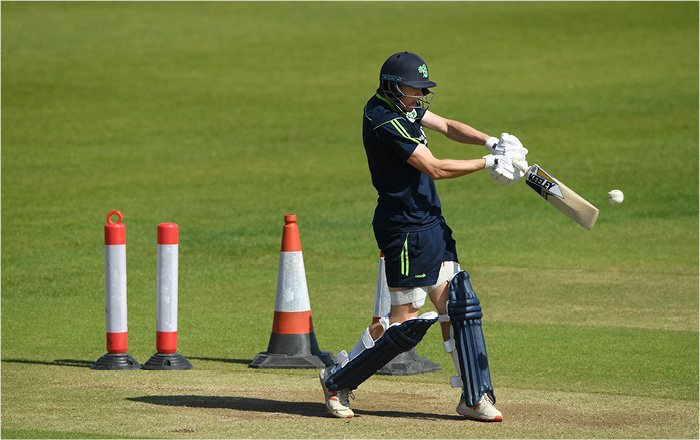 ABU DHABI – After an unexpected downpour of rain washed out training yesterday, the Irish squad has just completed a centre-wicket practice and returned to their isolated team hotel. Amongst them is Gareth Delany, who counter to general global feeling, considers 2020 as a very good year – relating to the cricket, that is.

Dublin-born Delany, 23, made his senior international debut 18 months ago and has been capped 28 times for Ireland. He was speaking from the team hotel:

“It’s great to back with the squad for this tour, it’s been over five months since we’ve been together as a squad, so we’re all delighted to be together again. There’s a great buzz around camp and everyone is looking forward to the upcoming fixtures.”

“2020 was actually a very good cricket year for us as we managed to get wins on all our overseas trips – and get some points on the board for the World Cup Super League. There were several standout performances from the guys throughout the year, particularly our win over the West Indies in the first T20 International – it was my first win over a Top 10 team, and it was incredible to watch Stirlo and Kev put on a world record stand.”

“I was fortunate to get the opportunity to play with Leicestershire in the Vitality Blast, and loved it. It certainly added to it that we made it into the quarters and just narrowly missed out on finals day. I’ve come away more confident in my game in terms of what works well for me and areas that I need to improve on – whether that’s adding a shot or two to my batting or having another variation for my bowling.”

“It has obviously been challenging to prepare for this series due to the current circumstances, but we’re very fortunate that we’ve still been able to train over the last four months. The focus has been primarily on strength and conditioning as we’ve been limited in the extent to which we can train for cricket, so it’s important that we make the most of the first week out here to get ourselves as ready as possible for the first game.”

Asked how he is settling into the tour, and what he expects, Delany said:

“While living in a bio-bubble isn’t ideal, it’s worth it since we get to play – which is all we want to do. It’s difficult being confined to your room, dining area and training facilities though, as usually you can leave the hotel to go out for coffee or dinner or just to explore and take your mind off cricket, but it’s made harder being in a bubble.”

“However, I have good memories from Abu Dhabi. Last time I was out here we managed to qualify for the next T20 World Cup, so hopefully we can have similar success again. The wickets tend to be slower and pretty dead, it’s difficult for the quickies as there isn’t anything in it for them.”

“The pitches are typically more conducive for spin bowlers, so it can be harder to score quickly. So, it’s important especially in ODI cricket to be able to rotate the strike and not allow the spinners to get on top too easily, then look to be more aggressive against the quicks later in the innings. The heat is another challenge to overcome, of course.”

“If I get the opportunity to bowl, conditions should hopefully be favourable  – but it only counts if you hit the right areas time after time, so being consistent will be the main thing. I’ve probably become more aware of what my strengths are with the ball and sticking to them. For me that means bowling pretty straight trying to attack the stumps, but I’m working on being able to slow things down and putting more flight on the ball when it might be needed. While I don’t imagine the pitches will offer too much early on for bowlers, as the series goes on you’d expect them to take more spin and be harder to score on.”

“It’s going to be a tough series versus the UAE – who are a good side playing in home conditions – and we may be a bit rusty early on. Hopefully we can get over that quickly and the lads can put in some good performances to gain form and confidence to win that series and carry it into the important World Cup Super League games against Afghanistan which will be a very tough challenge.”

The international fixtures, which will be played at the Zayed Cricket Stadium in Abu Dhabi, are:

The matches against Afghanistan will be part of the World Cup Super League (see below for details).

Matches will be livestreamed via Youtube in Ireland / UK, with further details made available closer to the match days. For the rest of the world, the series with either be shown on satellite television or livestreamed, so please check local guides.