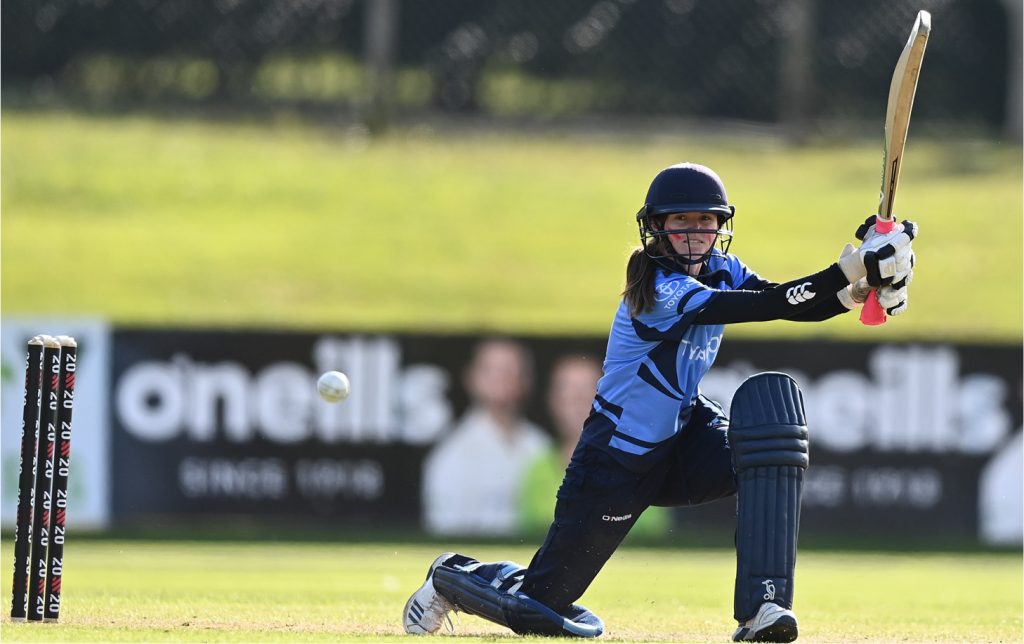 DUBLIN – A clinical run chase by the Typhoons saw the Laura Delany-led side claim its first-ever Women’s Super Series title in a high-scoring encounter against the Scorchers at Malahide today.

Scorchers captain Gaby Lewis won the toss and elected to bat first under blue autumn skies. However, she may have been regretting her decision a few moments later when she was dismissed for 1, playing around an inswinger from Orla Prendergast and losing her off stump.

Lewis’ opening partner Leah Paul (81*) then took responsibility for holding the innings together. Paul built her innings gradually, turning the strike over regularly and picking off the bad balls with shots predominantly through the on-side. Playing without risk, she was desperately looking for a partner to stick with her, but at the fall of the fourth wicket the Typhoons bowlers had the upper hand in the contest.

Sophie MacMahon (23 from 33 balls) offered some support, and began to up the run rate, however after she fell with the score on 119-5 in the 36th over, the Scorchers must have feared a below par score and a battle with the ball against an in-form Typhoons batting line up.

Enter Jenny Sparrow, the Leinster Cricket Club all-rounder set the tone early on swinging the ball away over mid-wicket for a powerful boundary. Sparrow, who had only registered 55 runs in her last four innings, showed a free spirit, bringing up for half-century of 48 balls and going on to make a brilliant 60 from 55 balls, featuring 9 fours. Paul and Sparrow’s 109-run partnership came off 79 balls and changed the momentum of the match completely.

The Scorchers eventually finished on 235-6 from their 50 overs, with Paul remaining not out in a 205-minute knock, making her the highest run-scorer in the Series with 295 runs at 42.14.

Seeking an early breakthrough to consolidate their advantage, the Scorchers met initial stubborn resistance from openers Rachel Delaney and Sarah Forbes. The pair put on 41 in the first 11 overs before Forbes was trapped in front for 9.

Rebecca Stokell (67) then joined Delaney and the pair continued to keep the board ticking over in a 98-run partnership. Delaney eventually fell LBW to Leah Paul for her second score of 64 this Series, before Stokell too fell to a sharp catch by Caiomhe McCann within sight of the finish post.

The Scorchers attack continued to probe for a breakthrough, but Typhoons skipper Laura Delany ensured a successful run chase was completed hitting 48 from 42 balls. The Typhoons registering a seven-wicket win with 49 balls to spare.

This is the Typhoons first title after six seasons of the competition, coming back from 4-2 down in the Series and claiming the competition on net run rate.