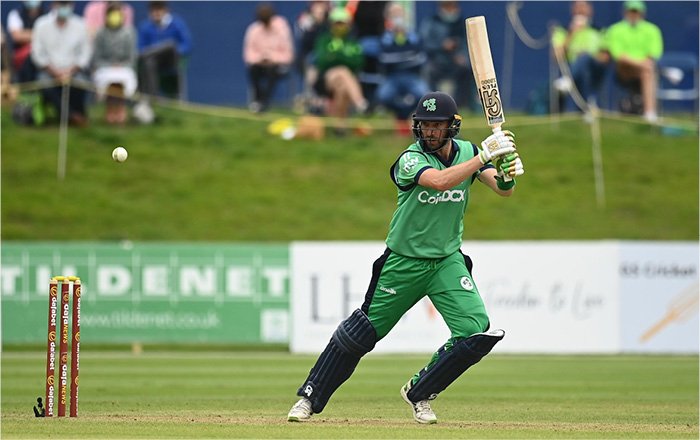 DUBLIN – Andrew Balbirnie delivered a captain’s knock as Ireland Men pulled off their first-ever victory over South Africa in the second game of the DafaNews Cup ODI series at Malahide..

The 30-year-old’s knock of 102 was followed by a fine 79 from Harry Tector as Ireland set the Proteas an imposing target of 291. The visitors responded strongly through a third-wicket stand of 108 between Janneman Malan and Rassie van der Dussen, but Ireland’s bowling attack fought back to help secure a historic 43-run win.

After Temba Bavuma won the toss and chose to bowl, Balbirnie – opening the batting after William Porterfield was ruled out of the match with an injured finger – and Paul Stirling got the Ireland innings off to a solid start, putting on 64 for the first wicket. While Stirling enjoyed some luck – he was dropped twice in his innings of 27 – Balbirnie looked in fine touch from the get-go, reeling off five boundaries as he moved to 23.

Keshav Maharaj was the man to break through for South Africa, bouncing back from a Stirling boundary to bowl the big-hitting right-hander in the 14th over. Andrew McBrine was the next man in for Ireland, batting above No.6 for the first time in his international career. While Balbirnie advanced to fifty off 51 deliveries, the left-hander at the other end was watchful in the early stages of his innings, reaching 22 off 44 deliveries. Then came the attack as McBrine deposited Tabraiz Shamsi for back-to-back fours. But the left-arm wrist-spinner had his revenge immediately, with McBrine failing to connect with a reverse sweep to be trapped LBW and depart for 30.

Tector arrived next at the crease and was in some trouble straight away – Shamsi managed to find the 21-year-old’s outside edge but Kyle Verreynne was unable to hold on behind the stumps. Tector’s difficult start continued as Anrich Nortje launched a short-ball barrage and managed to strike the helmet with one particularly vicious delivery.

But Tector eventually found his flow, hitting Maharaj for six in the 36th over before delivering another maximum in the 37th off Andile Phehlukwayo. Balbirnie, dropped by Kagiso Rabada on 74, continued to nurdle at the other end and a seventh ODI century was his reward, with three figures reached from 114 deliveries.

In a bid to up the ante, Balbirnie fell for 102 as he tried to loft one down the ground, but then came a sparkling partnership between Tector and George Dockrell. After facing just three deliveries, Dockrell smashed Rabada for six to set the tone for his innings – when he departed from the final ball of the innings, he had 45 runs to his name after facing just 23 deliveries. The introduction of Dockrell appeared to lift Tector too as he joined in on the fun, launching a full toss from Rabada for a huge six over midwicket. Their partnership was worth 90, despite lasting just 46 deliveries.

Malan provided an explosive start to South Africa in their chase, racing to 20 from 14 deliveries, but his partner Aiden Markram fell for 5 to Craig Young before Bavuma pulled Josh Little to Dockrell for 10 to leave South Africa 51-2. From there Malan and van der Dussen went to work – while the former finished with seven fours and four sixes in his impressive 84, the latter made sure to run hard, collecting just two boundaries on his way to 49.

Dockrell made the key breakthrough, getting Malan to find Mark Adair at deep midwicket, and van der Dussen fell just seven deliveries later as McBrine trapped him in front of his stumps. Regular breakthroughs followed as every member of Ireland’s attack claimed at least one scalp each. Rabada threatened to cause disruption after smashing two sixes, but he was dismissed in dramatic fashion: after Keshav Maharaj found Curtis Campher’s hands from a waist-high no-ball, the Ireland fielder remained alert to run out Rabada, who was out of his ground at the wicketkeeper’s end, with the help of Lorcan Tucker.

Mark Adair, who took two in two in the 49th over, wrapped things up and the celebrations followed – Ireland could rejoice in a momentous win.