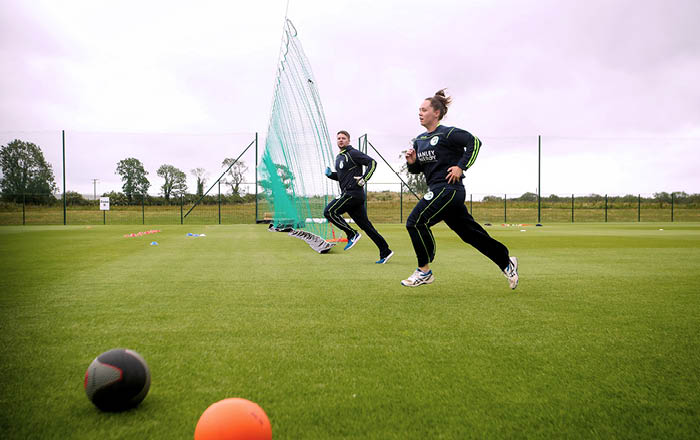 DUBLIN – Ireland Women’s captain Laura Delany and Head Coach Ed Joyce stepped back into the familiar surrounds of the Cricket Ireland High Performance Centre in Dublin this week, keen to blow off the cricketing cobwebs that had built up since lockdown began in March.

Despite the postponement of several international team fixtures in the last three months, both captain and coach have their minds fixed on the possible rescheduled World Cup Qualifier that will cement places in next year’s planned 50-over World Cup in New Zealand

Delany, who debuted internationally in 2010 and has been captain since 2016, was speaking after her first full training session at the High Performance Centre at the Sport Ireland National Sports Campus.

“I’m delighted to be back. The squad has been itching to get back for a while now, so to be finally given the green light is great.”

“It will take a little time to adjust to the protocols that have been put in place, but we have been educated on the detail of the protocols and the importance of adhering to them to protect everyone’s health and safety. While I had to consciously stop myself from falling back into old habits, it has been OK. Some of the new measures in place are quite obvious, such as keeping a two-metre distance, however, not picking up the balls after batting and washing your hands before you enter and leave different zones take some reminding. Thankfully the COVID Safety Officers are there to provide that gentle reminder!”

“I have only had one session so far, but given the current circumstances I thought the training session ran smoothly. Ed [Joyce] provided the squad with a schedule ahead of training, so we knew when we were batting, and when you were required to crossover for fielding and running. The training sessions for the next couple of weeks will be one-to-one sessions, which should actually be very beneficial given the fact that we’ve had long period away from the game.”

While the lockdown caused a major disruption, Delany pointed out that the squad remained busy and engaged during that time:

“Ed and our management team kept the squad pretty busy over the last couple of months through online training sessions. We’ve spent a lot of time analysing teams that we’re likely to face in the qualifiers and coming up with plans. We were also fortunate to have a few masterclass sessions with some top players [notably Meg Lanning and Anya Shrubsole] which proved to be very insightful and gave us a rare opportunity to ask these players their thought processes during certain situations we will find ourselves in.”

“I am looking forward to having a break from Zoom though – it proved a valuable tool whilst in lockdown, but there is no substitute for actual training and I know the group are very excited to get back into things properly.”

“It’s great to be back outdoors and training here at the High Performance Centre with the squad. Obviously with the restrictions and social distancing it means I can’t get the whole squad together at once, but we have a good training programme underway and the players have been delighted to get back to some activity.”

“While the home season has obviously been impacted greatly, we’re still hopeful of the World Cup Qualifier going ahead later in the year and we’ll put together a lead-in programme ahead of that. I just hope a decision can be made early enough by the ICC to allow us to pull this together and give our squad the best chance to compete in this important tournament.”

“I have to admit though that the throwing arm is feeling it after a three month break, but we’re enjoying the time in the nets and look forward to a hopeful resumption of competitive matches in the coming months.”

The Ireland Women’s cricket team are due to compete at the ICC World Cup Qualifier in July in Sri Lanka, however, the ICC will provide an update on the tournament’s status in due course.

We would like to thank Hanley Energy for their ongoing support of women’s cricket in Ireland, particularly during these challenging times.