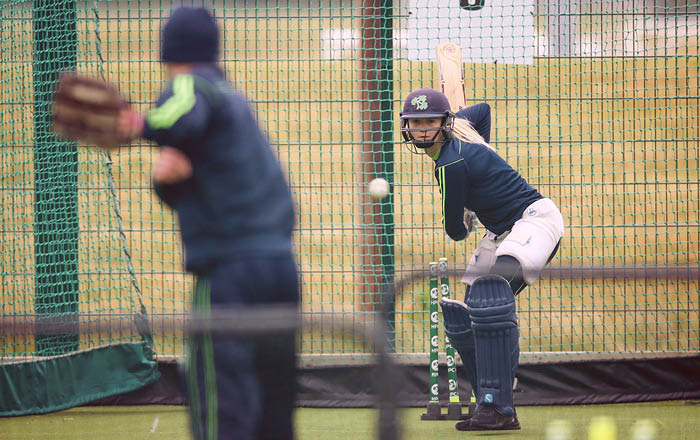 DUBLIN – Ireland Women’s Head Coach Ed Joyce has just passed the first anniversary since he first took over the role, and despite the unforeseen challenges the first 12 months would bring, he is as enthusiastic as ever to push the women’s game forward in Ireland, as new contract categories for women have been added for the first time.

The former Irish international was named interim Head Coach in June 2019, and had to quickly find his feet in his first Head Coach post.

“After stepping away from playing in May 2018, I had been working with the women’s, men’s and Academy players as primarily a batting coach. It was enjoyable keeping active within the game post-playing, but unexpectedly the opportunity arose with the Women’s Head Coach role. I had, of course, kept up with the progress of the women’s squad through my sisters and their involvement over the years, and didn’t hesitate when offered the role.”

“It’s been a challenging year, for sure. The initial disappointment at not qualifying for the Women’s T20 World Cup quickly turned into intense planning and preparation for a big 2020. We had a tour to Thailand planned, and were working on building a preparation programme in the lead-up to the World Cup Qualifier initially set for July. Unfortunately, like everyone involved in world sport, the pandemic changed everything.”

“The recent confirmation that Kim Garth has accepted a two-year contract with Cricket Victoria and left the Irish set-up for now was a blow – there’s no denying that. We had hoped that she could have helped us through the Qualifier in July before moving to Australia, but the postponement of the tournament ended that idea.”

“Putting that aside, it is great the squad is back in training as of this month and we’re all enjoying the chance to get back into some sort of normality. The players have come through the lockdown in good shape and we are now turning our minds to what will hopefully be a rescheduled Qualifier in late 2020.”

“For me, it has been an unusual first year in women’s cricket – we’ve not had any games for the best part of nine months for various reasons, but the challenge ahead is motivation enough for me. We have a great young crop of players ambitious to make their mark on international cricket, and with a world cup qualifier approaching, we have the tantalising prospect of potentially qualifying for a World Cup and the ICC Women’s Championship in 2021.”

“With the recent government announcements on sport’s gradual return-to-play, we hope to rectify this shortage of game time with more domestic games, and then build out a lead-in programme to the Qualifier to give our squad the best chance of success.”

“The future is bright if we can get our on-field and off-field plans to succeed, but there is a lot of hard work ahead. We aren’t blind to the financial and resource constraints we are working with – but the willingness to push on is there from myself and the players, and Cricket Ireland has committed to grow the women’s game in the long-term. We also know there is much goodwill in the Irish cricket family to see a successful side emerge from this transition period, so we’ll focus our attention on what we can control, and – with good planning and good fortune – will hopefully be back on the field playing good cricket and inspiring a new generation of girls and women across Ireland to play our great game.”

Cricket Ireland introduced its first part-time professional contracts for women in 2019, and six contracts were offered again in 2020. However, as a boost to the women’s game, there has been an increased investment through a new category of non-retainer contracts covering the rest of the senior performance squad.

The newly introduced non-retainer contracts are a further step on the road to a professionalised women’s game, and include year-round:

Eleven non-retainer contracts were offered to:

“We are pleased that we can further invest in the senior women’s squad through these new benefits contracts. Given the nature and profile of our players, we needed to provide a greater level of support and service to the fitness, health, conditioning and, most important, access to services that they need year-round. The medical and healthcare coverage alone will provide some peace-of-mind to the squad, and we hope to continue to build on these in subsequent years.”

“Despite these contracts being in place for several months, we had to delay the public announcement of women’s contracts until after the Kim Garth situation was concluded. Given the uncertainty over the impact of the pandemic and the rescheduling of the World Cup Qualifier, we will delay a decision on how to invest the residual funds. The funds may be able to provide additional contact hours with the players or additional warm-up preparation and matches, for example, once we know the timing of the Qualifier.”