‘Here for Ireland’ initiative to support Olympic and Paralympic hopefuls on their road to Toyko 2020. 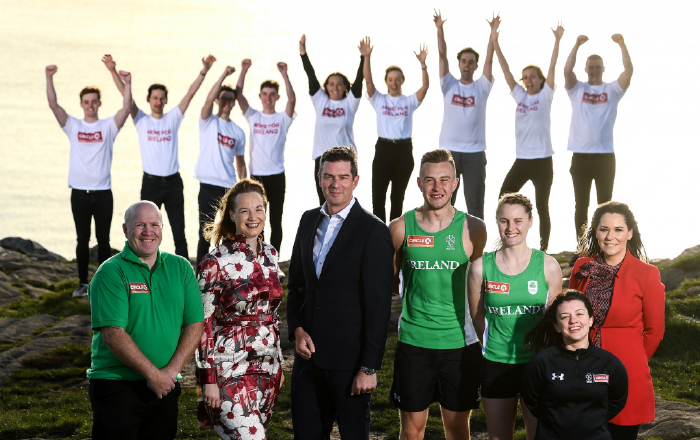 Start scanning your loyalty tag in store today – Circle K will be giving €250,000 worth of digital coins will be shared amongst Team Ireland athletes. ‘Here for Ireland’ initiative is an integral element of Circle K’s partnership with the Olympic Federation of Ireland and Paralympics Ireland.

Circle K, Ireland’s largest forecourt retailer and proud partner of both Irish Olympic and Paralympic Teams, today launches the ‘Here for Ireland’ initiative, which has been developed to support Irish athletes on the road to the Tokyo 2020 Games.

From today, Circle K customers can show their support for our homegrown champions by simply scanning either the Circle K app or their Play or Park loyalty tag in-store. In so doing, they will automatically generate digital coins, which Team Ireland athletes can then use to fuel their journey to Tokyo.

Athletes who sign up to the initiative can use the digital coins to redeem complementary miles fuel at all 410 Circle K service stations, as well as food or refreshments at any of the participating Circle K stores between now and the Tokyo 2020 Games. It is estimated that approximately €250,000 worth of digital coins will be generated over the course of the initiative, all of which will be shared evenly amongst Team Ireland hopefuls.

Whilst only launching today, 60 Olympic and Paralympic hopefuls from around the country have already signed up to the ‘Here for Ireland’ initiative including, Ellen Keane, Brendan Boyce and Sanita Puspure.

Speaking at the launch, Ciara Mageean said: “Athletes make many sacrifices – physical, emotional and financial – as they strive to achieve Olympic glory. Circle K’s Here for Ireland initiative will have a hugely positive impact on all Team Ireland athletes as the digital coins generated by Circle K customers will fuel our journey, quite literally, to Tokyo. On behalf of Team Ireland, I’d like to encourage consumers to get involved and show their support by simply scanning the Circle K app or their loyalty tag every time they shop at Circle K.”

Commenting on the ‘Here for Ireland’ initiative, Judy Glover, Circle K’s Senior Market Director, said: “Circle K is an extremely proud partner of both the Irish Olympic and Paralympic Teams. As part of the partnership, we wanted to ensure that we positively contributed to each athlete as they strive to achieve Olympic and Paralympic glory and we believe that ‘Here for Ireland’ does just that. Irish consumers can show their support by simply scanning the Circle K app or loyalty tag when they visit a Circle K store, it costs them nothing but the athletes will benefit greatly as an anticipated €250,000 will be raised and distributed amongst the Olympic and Paralympics hopefuls.”

The ‘Here for Ireland’ initiative is an integral element of Circle K’s partnership with the Olympic Federation of Ireland and Paralympics Ireland. Speaking at today’s launch, Peter Sherrard, CEO of the Olympic Federation of Ireland, said: “Here for Ireland is a great initiative, and is something that directly benefits our athletes. Athletes are the heartbeat of the sport, and the support that they will get from Circle K customers will help them as they journey through this crucial period ahead of the Olympic Games next summer.”

John Fulham, President of Paralympics Ireland, said: “Circle K has revealed a wonderful programme with ‘Here for Ireland’. This is a programme with a difference as it will benefit every Para Athlete that is on their own journey towards their ultimate Paralympic dreams. Circle K will bring Paralympic and Olympic athletes into every community right across the island of Ireland, I would urge people to support the programme and help make a real, positive impact on the lives of these incredible athlete role models.”

To celebrate the launch of ‘Here for Ireland’, Circle K has announced a weekend of activity at its Donnybrook, Dublin 4 forecourt on Saturday 2nd and Sunday 3rd November to coincide with the Ireland v Canada Women’s Olympic hockey qualifier in Energia Park. Supporters travelling to the qualifier can avail of complementary hot beverages when they sign up to Play or Park.

To support Team Ireland, simply scan the Circle K app or a Play or Park loyalty tag in-store. For more information, visit circlek.ie for details and follow Circle K Ireland on Facebook or @circlekireland on Twitter.