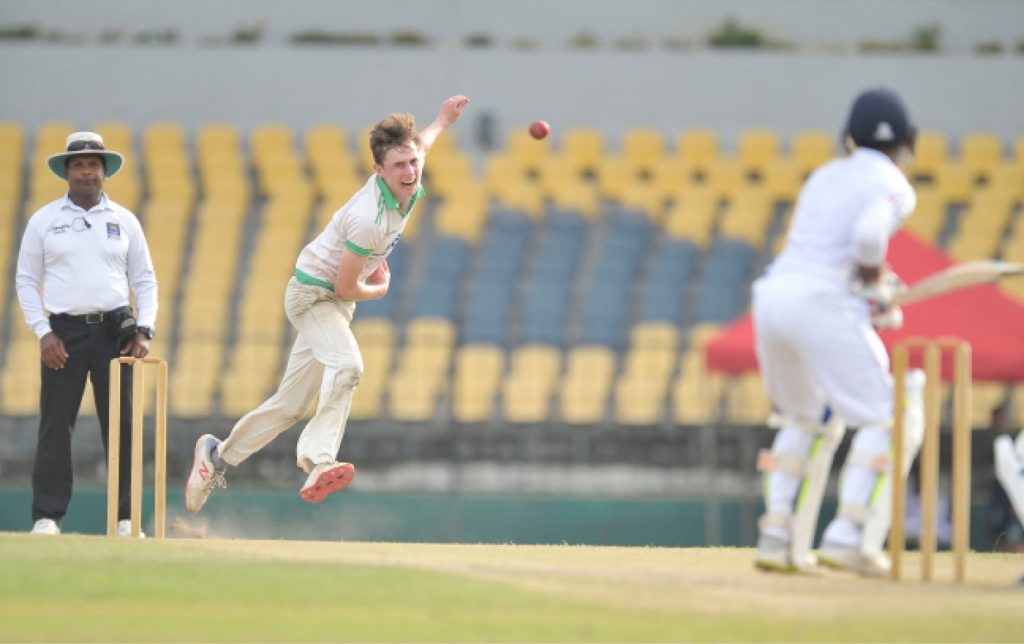 SOUTHAMPTON, England – With Ireland going into lockdown in March, Jonathan “JJ” Garth was determined to keep busy, maintaining his skills and fitness with the support of Shapoorji Pallonji Cricket Ireland Academy coaches and support staff. Never did he dream that a few months later he would don a face mask and board a plane bound for England as part of the senior men’s training squad.

19-year old leg spinner Garth has a strong pedigree in Irish cricket with both his parents – Jonathan and Anne-Marie – having played international cricket for Ireland, and his sister Kim until recently was the Ireland Women’s vice-captain. He had a successful season in 2019, touring Sri Lanka with the Ireland Wolves where he made his first-class debut, and he was part of the competition-winning Pembroke side in the Clear Currency Irish Senior Cup. 2020 had started well again, being part of the Ireland Wolves T20 squad playing Namibia in South Africa, but COVID-19 brought a sudden halt to his plans for the home season ahead.

The gradual return to training after the lockdown saw Garth – as an Academy player – training with the senior squad, but the call that came in early July from Andrew White, Chair of National Men’s Selectors, caught him off-guard. He said:

“I had been particularly looking forward to training with the Academy, especially after being locked down for three months with no cricket. It was great to get back to it. Shortly after training in the nets with the senior players, I got a phone call from Ireland head coach Graham Ford telling me there was an outside chance of selection for the training squad. That phone call was followed by another call from Andrew White saying that I was included in the squad. I was very surprised – but delighted to be included.”

“When I was growing up I played rugby, football and a bit of golf, however my main passion has always been cricket. I spent of lot of time playing it with my sister Kim and my brother Rob in the garden and the nets, and learnt a lot from them. It was always extremely competitive – never, ever friendly!“

“I started bowling leg spin when I was about 11 or 12 years old. I was bowling pace up until then, but it was suggested to me to try leg spin as there were so many seamers in Leinster.”

And who were his influences growing up:

“While my father has always been a significant influence on my cricket, I have to give credit to Kamal Merchant who has played a big role in developing my leg spin. Coming up through Under-17s and Under-19s, Nigel Jones and Ryan Eagleson have also been great support.”

“As for international cricketers, I always loved watching AB de Villiers play, but since turning to spin I have developed a great appreciation for leg spinners Rashid Khan and Imran Tahir.”

The Ireland Wolves programme has also been part of his development in recent times:

“I remember my first game for the Wolves against Bangladesh A – I was very excited, but at the same time very nervous. It was a very proud moment to be selected and to get the opportunity to play against such high-quality opposition.”

“But the Wolves tour to Sri Lanka has probably been my favourite tour so far. It is an amazing country, and to play in Asian conditions for the first time was really exciting. It was a massive and very valuable learning experience for me.”

“Although only 19, JJ has been around the Academy and Pathway for a long time and already has a great deal of experience. He competed in an Under-19 World Cup having just turned 17, and has played for the Ireland Wolves on many occasions, including against Bangladesh A, Sri Lanka A and recently the Namibian senior team.”

“He’s a hard worker, always with a positive mindset, and has earned this opportunity to join the senior training squad. I’ve no doubt that making the step up to be part of a senior team tour like this will be another great learning experience for him and that he will continue to develop his game and professionalism.”

Garth arrived in England with the Irish squad on Saturday and trained at the Ageas Bowl yesterday, ahead of the intra-squad practice match today starting at 2pm.

Matches played as part of the inaugural ICC Cricket World Cup Super League (2020-2022) are essentially World Cup Qualifier matches, as the League will serve as part of the 2023 Cricket World Cup Qualification process. It will feature thirteen teams, the twelve Full members of the International Cricket Council (ICC), and the Netherlands (who won the 2015–17 ICC World Cricket League Championship to qualify for this competition).