INTERVIEW: Ruhan Pretorius on a rollercoaster week for the Ireland Wolves’ all-rounder 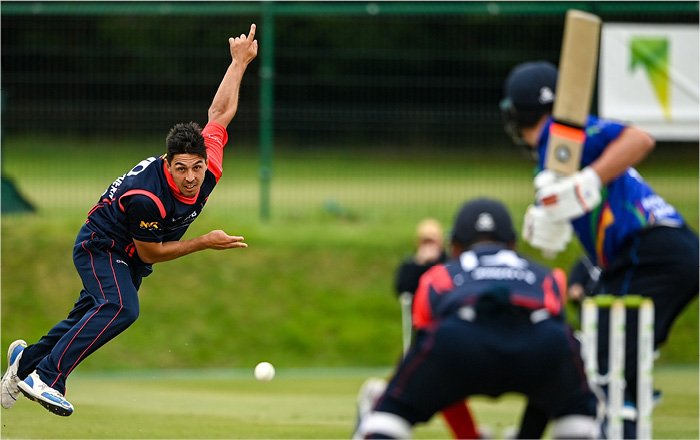 CHATTOGRAM, Bangladesh – Ireland Wolves’ Ruhan Pretorius has had possibly the most bizarre week of his cricket career – from the highs of being picked for his Wolves debut and taking his first wicket, to the lows of sitting uncertain in an isolation room under a Covid-19 cloud. But he has endured and is focussing on the future.

The 30-year old all-rounder had just celebrated his birthday on the tour last Tuesday, and was excited about being selected for his debut Wolves match – a 50-over game against the Bangladesh Emerging XI. Expecting to open with the bat, and be one of the key spearheads with the ball, Pretorius started his bowling spell with pace, movement and control. He claimed his first wicket – Yasir Ali caught behind for 4 – with a great delivery. Then, unexpectedly, with the home side looking precarious at 122-4 after 30 overs, the game was brought to a halt and Pretorius was called from the field. Shortly after, match officials called the game off.

“It’s been the most bizarre few days, to be honest. We started the first game all testing negative for Covid – we had to be negative in order to get on the field according to the protocols. Then halfway through the first innings I was pulled off the field and the game was stopped. To then be told I was potentially Covid positive was a shock.”

“I was isolated immediately from the team and was told to wear an orange suit – kind of like a sweat suit, but this one was for isolation. I then was taken in an ambulance to the team hotel, where I was immediately sent to the isolation room and spent the evening there.”

“To be fair, the team management were brilliant in managing the whole situation. I underwent two tests – an emergency test and another along with the rest of the team. Luckily both came back negative, and the medical staff advised that the original test was a false positive, so I was able to resume the tour.”

“To be honest, I didn’t think I’d playing yesterday. I was in a bit of a weird space after trying to get used to being in isolation, and thinking worst case that I might be there for 14 days if I was positive. To deal with it mentally was challenging – I was preparing myself for the worst. However, after getting the two negative results, I just tried to re-focus and get back in my normal routine.”

Pretorius was selected for the second game and went on to top score with 90 and take 1-40 from 9 overs. He said:

“I’ve been hitting the ball well and bowling pretty well in the nets – so I just tried to focus on the basics out there when yesterday’s game started. Luckily enough the ball wasn’t moving as much as it did in the four-day game and the wicket was a bit flatter.”

“The result was unfortunate – we know our death bowling needs to improve. While it’s something we need to take on the chin, we know we weren’t good enough in the last four or five overs. Even in our batting, we could have at times tried to score more freely, especially myself as the set batsman.”

“If you add up the little things – a few extra runs with the bat, and executing a little bit better with the ball – we could have pulled it over the line. But that’s what this tour is about – we’re here to learn and here to learn on our feet. The next game is just around the corner, so we’ll need to take what we’ve learnt and apply it quickly over coming days.”

The upcoming fixtures will be:

The Ireland Wolves squad is: