Interview: Shauna Kavanagh on being born into cricket, the number 85 and playing Zimbabwe 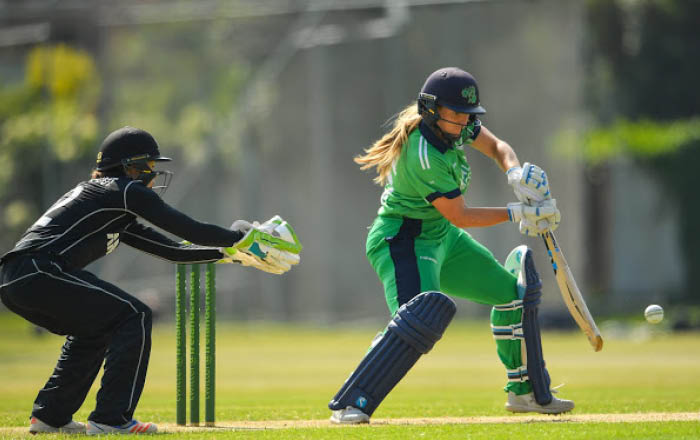 DUBLIN – As the Ireland Women’s cricket team await news of any changes to the World Cup Qualifier schedule, the players have been busy working on their technical knowledge and fitness via numerous video-conferencing sessions, as well as keeping themselves active in supporting their local clubs from a distance. Shauna Kavanagh – now a senior member of the squad – was speaking about her career and talked about the memories of the Zimbabwe tour of 2018 when she hit her highest international score.

Kavanagh debuted in 2011 and has made 83 appearances for Ireland. She has played GAA, soccer, hockey and enjoyed athletics, but cricket is her number one passion.

She was speaking from her home in Dublin.

How did you get into cricket?

Kavanagh: “It was never really an option to start playing, it was just ingrained in us. I grew up down in Pembroke Cricket Club and started playing around seven years of age. My dad was a wicket-keeper for the Club – in fact he still plays and we get to play together, which is lovely – although I’m not sure how many years he has left in him!”

“I actually started off as a quick bowler and that’s how I broke into representative setups (her highlight was in 2011 when she took 7-23 for Ireland playing Worcestershire in the County Championships). I was a predominantly a bowler up until about 2012, at which point I lost my action. I continued to bowl on-and-off up until about 2017, but by then batting had become the main focus.”

Did you have any cricket role models growing up?

Kavanagh: “I loved watching the Ashes when I was younger and was obsessed with Jimmy Anderson, Brett Lee and Michael Clarke. Unfortunately we didn’t have the same visibility of the women’s game when I was younger, but I always looked up to Irish internationals like Nicki Coffey and Clare Shillington. In fact, Clare became hugely influential in my career, she really supported me through a lot of the tough times and had a huge reason why I have stayed in the game. I’m very lucky that I still have access to her as a coach at Pembroke CC.”

You have the squad number ‘85’ – what is the story behind that choice?

Kavanagh: “I chose number 85 for my grandad. He lived in a house with number 85 and we subsequently moved into that family house in my teenage years. Number 85 was a really important family number for my family, so as a number it has a very personal meaning.”

The side that travelled to Zimbabwe in 2018 was missing some senior players – what was the overall experience of the tour like for the squad?

Kavanagh: “It was a really young side that travelled to Zimbabwe in 2018, with four or five new caps, along with a few players with only a handful of caps. So we were largely inexperienced, with the exception of Mary Waldron and Isobel Joyce. This was actually a positive in a sense, as it provided so much opportunity for the players – whether it was international debuts or spending more time in the middle, or bowling more overs for fringe players.”

“But the overwhelming memory of that tour was unfortunately the amount of rain and the frustration that it brought. We played three out of eight games – it wasn’t easy but that was the beauty of a young squad in that circumstance, the excitement and enthusiasm they brought really helped to keep spirits up.”

During the first 50-over match of the series you came in at 30-3, scored a career-best so far 79* (hitting five sixes along the way), and helped give Ireland a target to bowl at. Can you remember how you felt out in the middle that day?

Kavanagh: “I remember that day really clearly and exactly how I felt. I was batting at 5 which was a new position for me, and still felt I was only just cementing my position in the starting XI. I had had some success against the Zimbabwe bowlers in the year prior to that tour [she scored 53 and 67 against Zimbabwe in South Africa in May 2017], so I was confident – but we were at that stage 30-3 and so there were still a few nerves.”

“Zimbabwe were on top and we needed to rebuild. I remember the first part of that innings because of how average it was – I scored my first 25 runs off about 70 or 80 balls, at which point we came off for rain, and I remember feeling disappointed, but we knew we had to soak up some pressure. We went back out to bat with a bit over 10 overs to go and with only about 100 runs on the board, so I was determined to take the bowlers on and try give us a total to defend. I scored that last 50 runs of my innings (which included five sixes) at a pace that I possibly didn’t realise I was capable of.”

“Cara Murray came in at 9 and played a huge role in getting us to that total of just under 180. She only had a handful of caps of experience, but was outstanding in those last few overs – she remained calm and collected, which helped us to build a decent partnership.”

Ireland won the second 50-over match of the series – belief in the squad must have been growing?

Kavanagh: “We bounced back well on that second ODI and secured a win off the back of a 171-run partnership between Isobel Joyce and Rachel Delaney. The innings was then backed up by our bowlers, and became such an important win early on in that tour for a young squad and gave us a lot of confidence going into the T20s.”

A tight loss in the first T20I looked to have set up a competitive series – the intervening weather must have been a disappointment?

Kavanagh: “The first T20 was closely contested, but we unfortunately lost in the final over – but while we weren’t on the right side of the scoreboard it was still fantastic experience for the squad. They’re the kind of games that stand to you, particularly at an international level.”

“Unfortunately we had four straight wash-outs after that and played no more competitive cricket on the tour, which was highly frustrating and disappointing. However, I was really impressed with how everyone in our squad reacted to that. We had access to an indoor facility out there and essentially had an indoor training camp for the rest of the tour. Everyone got a huge amount out of that, and I think it’s testament to the squad that people knuckled down and ensured they left Zimbabwe better players that they were when they arrived.”

While ultimately disappointing at how much cricket was played, what were the positives that the squad took away?

Kavanagh: “It definitely wasn’t a wasted tour – there were international debuts made, opportunities for fringe players, we had an intensive indoor training camp for a week that everyone learnt a huge amount in – it also led the squad through some challenging experiences and emotions that you need to develop as international cricketers. So the tour – despite the rain – proved of value overall.”

Thinking about your career, what advice did you receive that made the most impact on you?

Kavanagh: “Everyone’s game is so different and that I needed to find out what works for me – up until that point I had spent a lot of my career comparing myself to others and trying to emulate the type of cricket they were playing.”

Who is the toughest batter and bowler you’ve come up against internationally?

Kavanagh: “I haven’t bowled internationally in a while but I remember bowling at Charmari Atapattu in Sri Lanka in 2011 – she scored an incredible century and never looked like getting out. She was probably the toughest batter I remember bowling against. As for bowlers, Shabnim Ismail of South Africa generates so much pace and bounce and is really aggressive with her lines.”

And what about away from the game, what are you currently watching, reading and otherwise spending any downtime you have during lockdown?

Kavanagh: “I’m a Harry Potter fan and have the latest James Bond movie queued up to watch next. As for reading, I have way too many to name, as I usually have about 5 books on the go at once. In terms of sports books, I recently read Andre Agassi’s autobiography ‘Open’ and I’m enjoying reading the ‘Mamba Mentality’ by Kobe Bryant at the moment.”

“I like to spend time on Instagram, but since lockdown started, I have started to use the Down Dog yoga app and the Headspace app a lot more.”

The Ireland Women’s cricket team are due to compete at the ICC World Cup Qualifier in July in Sri Lanka, however, the ICC will provide an update on the tournament’s status in due course.

We would like to thank Hanley Energy for their ongoing support of women’s cricket in Ireland, particularly during these challenging times.