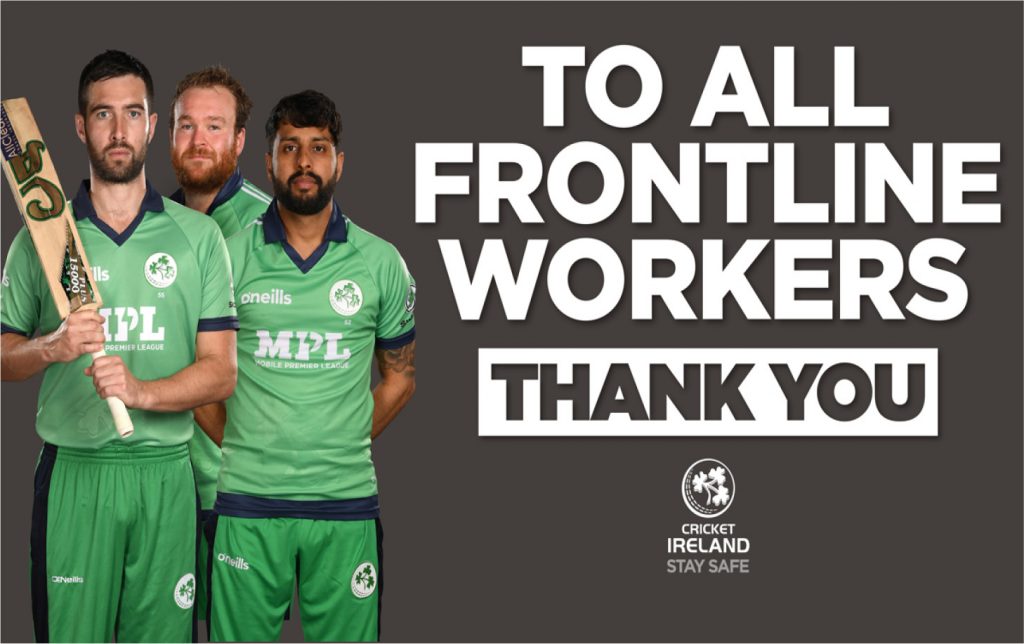 SOUTHAMPTON, England – As the one-day international between Ireland Men and England Men is played out at the Ageas Bowl in Southampton, the visiting side will display a flag adjacent their dressing room with the simple message of “Thank you” on it.

“During the upcoming one-day international series, the Ireland Men’s team – on behalf of the entire Irish cricket family – want to acknowledge the hard work, dedication and selfless sacrifice that frontline workers have displayed throughout the pandemic. To the many thousands of staff in the HSE, HSCNI and NHS, we simply say: Thank you.”

“You have shown us the best of humanity during the worst of times, and we shouldn’t forget that the fight against COVID-19 goes on.”

“None of us would be able to play cricket today without your efforts. So, once more, we say: thank you.”

An accompanying graphic is attached that will be posted to support the messaging. An image of the flag design is here.

All three ODIs will be available to watch live on Sky Sports Cricket in Ireland/UK. Please check local guides for countries outside of this. BBC Sport will be providing Test Match Special commentary, BBC2 will provide TV highlights and BBC social media will feature video clips during play.

Matches played as part of the inaugural ICC Cricket World Cup Super League (2020-2023) are essentially World Cup Qualifier matches, as the League will serve as part of the 2023 Cricket World Cup Qualification process. It will feature thirteen teams, the twelve Full members of the International Cricket Council (ICC), and the Netherlands (who won the 2015–17 ICC World Cricket League Championship to qualify for this competition). Each team will play an ODI series against eight of the twelve opponents, four series at home and four away. Each series will consist of three ODIs. For the World Cup, the hosts (India in 2023), and the top seven-ranked sides thereafter, will qualify automatically. The remaining five teams will play in a qualifying event along with five Associate sides, from which two sides will go through to the final tournament.