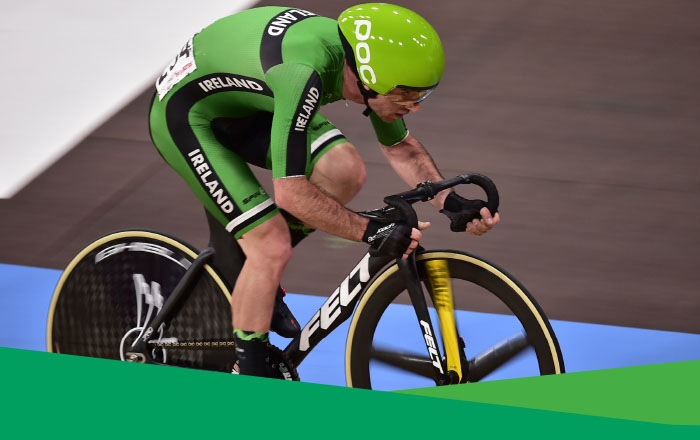 Sundrive velodrome will play host to the championships which is being run behind closed doors in accordance with government guidelines. Despite current travel restrictions, competition remains fierce with well-established names set to fight it out for national titles while younger talent and rising stars will be looking to cause an upset.

Watch Ireland’s top track cyclists from 10:30am on Saturday and Sunday on Cycling Ireland and Pundit Arena Facebook pages.

Mark Downey (Cotes D’Armor Cycling Team) – a bronze medallist at the 2019 World Championships and Track World Cup winner, Downey has the mix power, endurance, and speed needed for track cycling. Having helped secure Ireland’s Madison team qualification for Tokyo at the Track World Championships in Berlin in early March, Downey enjoyed some downtime as racing halted due to Covid19. Will the man from Dromore in Co. Down have regained enough fitness and form to contest for medals in the Scratch race?

Fintan Ryan (Kingspan-Trackproject.ie) – the current Scratch Champion will be looking to defend his title this year and with his experience racing at an international level he will be full of confidence. Ryan has been in form of late with recent wins in Mondello and will be tough to beat, however young guns Ben Walsh (EvoPro Racing) and Aaron Wade (Powerhouse Sport) won’t make it easy for him. While being known for his race craft, Ryan will also be going up against the clock in the 4km pursuit and the 1km TT, and it wouldn’t be a surprise to see him emerge with medals in those events.

Orla Walsh (NOPINZ SYMEC Race Team) – having spent the last year converting from an endurance rider to a pure sprinter Walsh has spent the last two months breaking the Women’s National Record in the 200m flying TT not once, not twice or even three times but a hugely impressive four record breaking rides. Walsh will be pushing for a fifth record but will have to face off against and beat more experienced sprinters, such as Eimer McMullan (UCD Cycling Club), if she wants to climb on to the top step at the end of the day.

Lara Gillespie (UCD Cycling Club) – despite this being her first Senior National Championships, Gillespie is bringing world class experience with her as she steps up from the Junior ranks. The ultimate all-rounder who enjoys road, track and off-road cycling, Gillespie will be competing across all four track events and is more than capable of medalling in each.

Eoin Mullen (Sundrive Track Team) – the multiple National Champions pure power and intelligent tactics have never been beaten at a National Championship Sprint event (at both Junior and Senior level). Mullen will be hoping to keep that streak alive, however the Irish Sprinter’s League has helped to develop a number of riders that will be hoping to take the title from Mullen.

Cian Keogh (Spellman-Dublin Port) and Kelly Murphy (Storey Racing) – these two aero specialists will have their eyes on gold in the 4km and 3km pursuits, respectively. They are among the fastest against the clock on paper and both riders have recent form to back it up.