McBrine, Tucker heroics not enough to take Ireland over the line 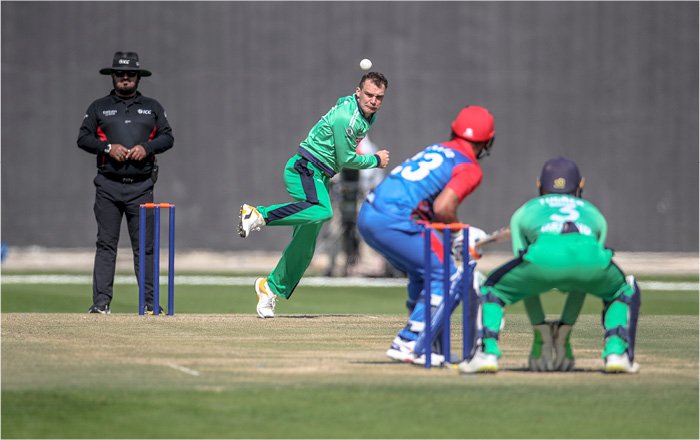 ABU DHABI – Career-best ODI performances from Andy McBrine and Lorcan Tucker weren’t enough for Ireland to overcome a strong Afghanistan side in the series opener at Abu Dhabi.

McBrine, who finished with figures of 5-29, ripped through the experienced Afghanistan middle-order, dismissing all of Rahmat Shah, Asghar Afghan, Mohammad Nabi and Gulbadin Naib for single figure scores. The wicket of Gulbadin to claim the five-wicket haul was arguably the pick of the bunch, a beautifully flighted off-break from around the wicket, that dipped on Gulbadin, took an inside edge and was caught well by Kevin O’Brien at leg-slip – the third of three catches the all-rounder took off McBrine’s bowling from that position.

McBrine’s intervention was a timely one for Ireland as Afghanistan got off to a flying start after winning the toss and opting to bat first. The Afghanistan opening pair of Rahmanullah Gurbaz – a 19-year-old on ODI debut – and Javed Ahmadi put on 120 for the first wicket before McBrine accounted for Ahmadi, who found Simi Singh in the deep after a period of sustained pressure.

That breakthrough sparked somewhat of a middle-order collapse at the hands of McBrine, whose wickets reduced Afghanistan from 120-0 to 161-5 in the space of 10 overs. Fortunately for Afghanistan, Rahmanullah displayed a kind of maturity that belied his relative inexperience, as the youngster held firm as wickets fell at the other end. Rahmanullah – who was the player of the series in the three-match T20I series between the two sides in 2020 – eventually brought up his maiden ODI hundred in the 35th over, before accelerating to finish on 127, a knock that came at exactly a run per ball.

Rahmanullah’s effort seemed to inspire the Afghanistan lower-order who rallied after the centurion’s dismissal, to take their side from 198-7 to an imposing final total of 287-9 from their 50 overs with the majority of their late innings run-scoring coming off the blade of Rashid Khan, who blasted a 30-ball 55 from No.9.

Paul Stirling and Harry Tector brought up a 50-run partnership for the third wicket before both fell in quick succession, as Tector spooned a return catch to Gulbadin off another slower ball before Nabi pinned Stirling in front for 39.

With Ireland 88-4, a rebuilding job was required. Curtis Campher and Lorcan Tucker combined to put on 86 for the fifth wicket before the former eventually fell lbw to Mujeeb Ur Rahman for 39.

Tucker kicked on, though. He soon brought up a second career ODI half-century and raced past his previous career-best ODI score of 56; he eventually fell on 83, stumped trying to use his feet against Rashid as the asking rate climbed. As assured an innings it was, it wasn’t quite enough for Ireland as they eventually fell 16 runs short.

After the match, captain Balbirnie said:

“We need to be more consistent – we had a lot of starts there, including myself. Their player kicked on and scored a hundred and played really well. That was really the difference between the two sides.”

“But some of our guys are still finding their feet at international cricket and can take a lot of positives. To score 270 on the wicket was good – but in the end it wasn’t enough to win the game today.”

“We pretty much knew what we were up against today with Afghanistan, and on a wicket that began to turn. I thought we played them pretty well today, they’re skillful bowlers, but we are just as skillful with the bat. We’ve just got to work as hard as we can off the pitch, and go again.”

“We’ll probably have a day off tomorrow with the second and third games being so close together. We need to rest, but we also need to keep our skills up – and we’ll aim to collect 10 or 20 points over the next two games.”

The next international fixtures, which will be played at the Zayed Cricket Stadium in Abu Dhabi, are:

The matches against Afghanistan will be part of the World Cup Super League (see below for details).