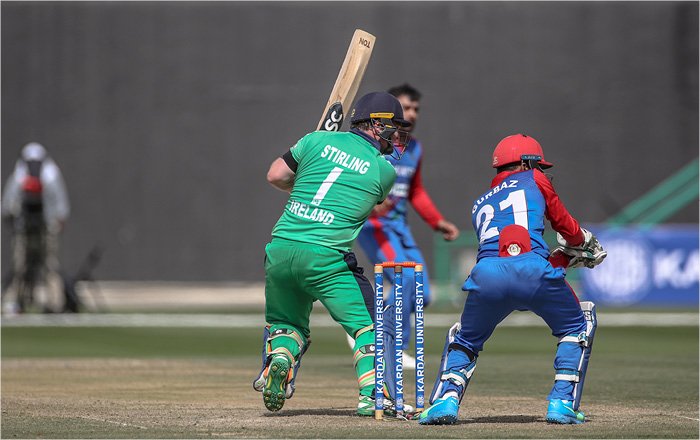 ABU DHABI – Paul Stirling hit an excellent hundred to push Ireland past 250 in the second ODI against Afghanistan, but an unbeaten ton from Rahmat Shah saw the hosts to a series-sealing victory.

Having fallen just 16 runs short of victory in the opening game of the series, it was another case of nearly but not quite for Ireland at the Sheikh Zayed Stadium in Abu Dhabi. Having won the toss and elected to bat, captain Andrew Balbirnie saw his side get off to a tricky start, with his the second of two wickets to fall to Mujeeb Ur Rahman inside the first four overs.

From 20-2, Stirling set about repairing the damage, constructing a succession of valuable middle-order stands. Harry Tector made his second start of the series, taking the team score beyond three figures before chipping Naveen-ul-Haq to midwicket, while Curtis Campher contributed another invaluable hand, notching 47 in quick time as part of a century stand.

From 208-3 in the 41st over, with Stirling well past his century, Ireland would have been hoping for a strong finish. But Afghanistan bounced back, taking 6-51 from that point onwards. Naveen claimed three of those, striking with the last two balls of his spell after Stirling had picked out the man in the ring on 128.

That brought to an end a truly special knock, with the opener racing along at close to a run a ball. He plundered 12 fours and four sixes, each four more than his teammates could muster combined, and, in the course of his innings, overtook William Porterfield as Ireland’s leading international run-scorer. With the hundred his 11th in ODIs, he equalled Porterfield for the most tons by an Irishman in the format.

Yesterday, Stirling had been one of the many to pay tribute to Irish cricketing legend Roy Torrens after his passing. “Irish cricket to the very core but an even better man,” Stirling had written, and he signalled to the sky after removing his helmet to celebrate three figures.

The reply started strongly for Afghanistan, with opening pair Javed Ahmadi and Rahmanullah Gurbaz moved swiftly to within one blow of a half-century partnership. But in the eighth over, hope sprung anew as Barry McCarthy removed the former lbw, getting the ball to jag back in from outside off-stump. Then Rahmanullah, fresh off a century on debut in the first ODI and having raced to 31, was dismissed by a full ball from Campher, missing a flick and remaining out despite a review.

It was at this point that Rahmat and Hashmatullah Shahidi combined to put on the game’s defining stand. Runs flowed freely at first, and at the halfway stage the hosts were well over halfway to their target. However, Gareth Delany, Craig Young and Andy McBrine then combined to peg Afghanistan back, and the next eight overs passed by without a boundary. The rate required neared a run a ball.

It was then that the tempo shifted. Rahmat began to use his feet to attack the spinners, striking a four and a six in successive overs, and Shahidi soon got in on the act, striking two consecutive Young short balls for four, and the rate started decreasing again.

By the time Simi Singh broke through, deceiving Shahidi in the flight and enticing him to hole out to long-off, Ireland’s chances were slim. Singh’s next over went for just one run, but Asghar Afghan soon made up for any sluggishness, striking McCarthy for six, six and four to bring his side to within one run of Ireland’s total, and victory was achieved soon after.

The two sides will return on Tuesday to battle it out for the final points towards the ICC Men’s Cricket World Cup Super League.

After the match, captain Balbirnie said:

“At the halfway stage we were in the game, but would have liked a few more having batted so well – particularly Paul again playing so beautifully to set us up. We probably lost a bit of momentum there at the back end. With 260 we felt in the game, but we didn’t have enough on a pitch that played a bit slower and deader as the day went on.”

“We definitely expected the pitch to turn a bit more in the second innings, but it probably didn’t turn as much as we would have liked.”

“I still think we can do better with the bat – apart from Paul and Curtis, there weren’t a lot of positives to take. We played well the other day getting 270, and we set ourselves up to mount a good total here today, but we weren’t able to do that, and against this Afghan side that has a lot of power we were up against it.”

“Paul seems to have a fantastic tour every time we go away – he was very close to the late Roy Torrens who we unfortunately lost yesterday, and you could see that that innings today was for him.”

“There are definitely players ready to go in the wings, and that’s the beauty of this squad that there are a number of players knocking on the door. We picked the guys for these two games that we thought could win some games, and they have been trying – particularly the bowlers who have been battling hard on a wicket not conducive to our style of bowling. The lads are hard on themselves, they’ll be really disappointed with the last two games, but as a squad we’ve got to be ready to rebound and ready to go – we’ve only a day between games, and we’ve got to pick ourselves up and get some points towards this World Cup Super League.”

The next international fixture, which will be played at the Zayed Cricket Stadium in Abu Dhabi, is:

The matches against Afghanistan are part of the World Cup Super League (see below for details).