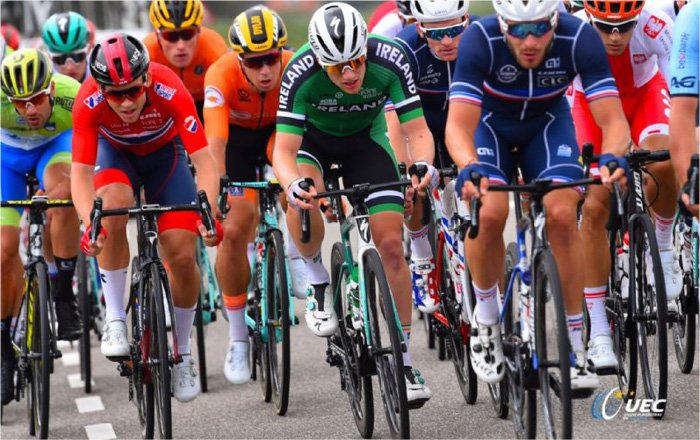 A team of 22 riders will represent Ireland at the UEC European Road Championships in Trento, Italy from 8th – 12th September.

Sam Bennett will make his return to racing to lead the Irish team after injury forced him out of the 2021 Tour de France. The Carrick-on-Suir sprint specialist will be hoping to regain some of his early season form which saw him take seven victories before injury struck.

Bennett will be joined in the Elite Men’s Road Race by Ryan Mullen, Conn McDunphy and Matthew Taggart. Powerful time triallist, Ryan Mullen will be a key ally for Bennett at the European Championships and is set to join Bennett at BORA – Hansgrohe for the 2022 season.

Ireland will send a large U23 and Junior contingent competing across both the Road Race and Time Trial. The U23 Men’s Road Race team comprises of Kevin McCambridge, Aaron Wade, Dillon Corkery, Adam Ward, Devin Shortt and Matthew Devins. Both McCambridge and Wade will also ride the Time Trial.

All the road races except for the Elite Men’s Road Race will be decided on a 13.2km circuit which starts and finishes in Piazza Duomo. The circuit has 250m of elevation gain and features the Povo climb, 3.6km of a climb at 4.7 per cent followed by a descent which brings the riders to Piazza Vicenza for the final 4km flat section to the finish line.

The Elite Men’s Road Race will feature an opening 73km loop in the Valle dei Laghi which leads back to Piazza Duomo in Trento where the riders will complete 8 laps of the 13.2km circuit.