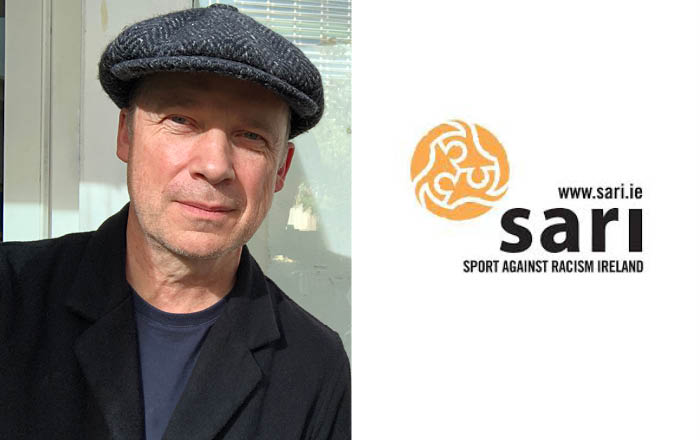 25th June 2020: The Executive Chair of Sports Against Racism in Ireland (SARI) Perry Ogden has called for the Government to move quicker on establishing an anti-racism taskforce this year.

Mr Ogden was speaking on a live virtual webinar hosted by flexible office space providers Glandore about diversity and inclusion and called for better leadership at a government level to tackle racism in Ireland.

“The task force was announced in December last year and they’ve got a bit of a kicking over it – I think they should be moving a bit quicker on it – it’s vitally important. Are we going to have to wait a year to see the report, and how long then before it’s implemented and discussed?” he asked.

Mr Ogden, also an award-winning photographer and film director, has been heavily involved with SARI since its establishment in 1997 to deal with an increasing number of racist attacks taking place in Dublin. The charity chose to champion using the medium of sporting activities to bring different communities and ethnicities together, and held their very first soccer tournament in July of 1997.

23 years later, the charity now works with a wide range of sports governing bodies across the country and have previously led education programmes and workshops in primary schools relating to racism, homosexuality and sexism.

Mr Odgen told Glandore’s Head of Marketing, Henry Daly that racism was an issue that needed to be challenged in Ireland, but added that people had “a lot of goodwill” and were “lacking guidance.” He called for better education in schools relating to issues of racism, diversity and inclusion. “If you can get to primary schools and talk to them and educate them from a young age, with sport you can play games and illustrate to them how it feels to be discriminated against and it’s been very effective.

“I think parents of young kids here have a role to play as well in that they can help to reach out to ethnic minorities – ask local clubs what their policies are for diversity and inclusion, ask if they’re going to provide training to coaches on this issue,” he added.

Mr Ogden praised the Gaelic Athletic Association (GAA)  for taking the lead in the charge to address racism and inclusion within the sport, adding that the organisation was “the most advanced” governing body in the country in terms of their efforts.

Asked about how businesses could learn from sport in terms of its approach to inclusion, Mr Ogden said businesses could be asking how they can get involved, reach out to the local communities and support education, clubs, colleges or sports initiatives.

He added that it was “never too late” to get involved as the charity began to host some of their soccer leagues in Dublin again on Tuesday night.

“Hijabs and Hattricks” is a soccer league specifically for females and is currently taking place in Phoenix Park, while the organisation are also hoping to reintroduce Soccer Night Friday in the next two weeks which is a soccer league open to everyone. He added he was hopeful that one of their biggest events, Soccer Fest, would be allowed to be held on September 12th later this year, though in a slightly reduced capacity. The annual event will be in its 11th year and aims to bring together as many communities as possible from across Ireland.

Speaking about the future, Mr Ogden was optimistic that Ireland could make huge strides to tackle racism with a united approach. He said that Ireland, as a relatively small country should be able to build a nationwide community of people to rally around the issue and drive change in a positive way, and be an example to the rest of the world. “I have a lot of hope, yes there is work to be done but the more people who get involved the more hope there is and I think we need better leadership on this from a government level.”

Glandore also launched a raffle last week with prizes from nine different Irish businesses, of which the proceeds will be entirely donated to SARI.

The company have been staunch in their support for a diverse, equal and inclusive workplace:

“At Glandore, we believe in a diverse, equal community, where every individual has the right and opportunity to achieve their full potential.

“As an Irish business that works across international borders and provides space for companies from over 20 different countries, we want to ensure that the people we work with, our employees and our member businesses are treated with the utmost respect and as equals in all aspects of business and life,” he added.

The link to purchase a ticket is here – the winners will be announced on Friday on Glandore’s Instagram page.

Further information about SARI and their events is available on their website – www.sari.ie

*The Team at Glandore are taking any and every step required to keep their staff, member businesses and employees safe. They are still very much open for business and to assisting all members and business partners as best they can over the coming months. Should you wish to speak to a member of the team or make an enquiry regarding office space please email the Sales Team at info@glandore.ie. They are continuing to monitor the situation and correspondence from the HSE and keep all of their buildings safe for the businesses they house.