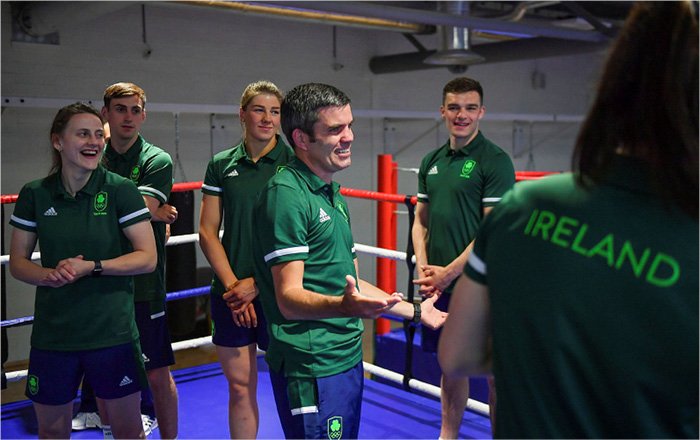 Team Ireland has officially selected a team of seven boxers to compete in the Olympic Games in Tokyo this summer. Six of the team are set to compete in their first Senior Games, Rio Olympian, Brendan Irvine, was announced earlier this year, with the remainder being confirmed in June. The boxing events take place in the Kokugikan Arena in Tokyo from the 24 July – 8 August 2021.

The team are going into the Games with real possibilities of success, after strong performances in Paris last month. Three of the European Games medallists are part of the team, including gold medal winner Kurt Walker, and silver medallists Kellie Harrington and Michaela Walsh. Walsh is joined on the team by her brother Aidan, as well as Dubliner Emmet Brennan and 2019 European Champion from Roscommon Aoife O’Rourke.

Team Captain Irvine is looking forward to the competition,

“We are excited to just get stuck in now. We have a strong team, with every single person going into the Olympic Games with a real opportunity to do something special. The Olympics are like no other tournament, and I’m lucky to be going to my second. We all know that these Games will be different, and that it will be a new experience for each of us, but especially on the back of what has been a tough and testing year, we are ready.”

“Boxing is Ireland’s most successful Olympic sport, with a proud history of medal winning performers. Up until a few weeks ago we had one confirmed spot and so it was great to see the team rise to the occasion in Paris earlier this month to build qualification numbers to seven. We are looking forward to seeing this talented group of Boxers perform in Tokyo as part of Team Ireland.”

“They’re coming off a really tough tournament in Paris, and we have seven now qualified. We are now recovering from that and starting to really push ourselves in training before we head out to our training camp in Miyazaki before we do our final preparations before we move down to the Olympic Village on the 19th July. We are ready, we have a strong team, both male and female. We just need to manage ourselves as best we can once we get out there and get good work against the other world class countries that are coming out to the training camp. Everyone is just looking forward to it. It has been pushed back, and there has been so much doubt over the past year and a half, so it’s great that it’s finally here. And that the guys get to perform on the biggest stage, which is the Olympic Games.”

Team Ireland now consists of 57 officially selected athletes, with over 100 athletes spots confirmed across nineteen sports SEE HERE. The final team announcement is scheduled for the beginning of July. The Olympic Games in Tokyo will run from the 23rd July to 8th August 2021.