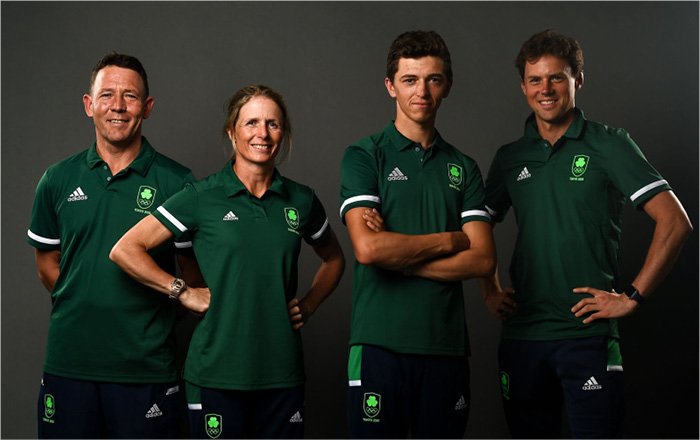 JULY 30th, 2021: It was a blistering evening of action for Team Ireland this evening, with two records broken in style in athletics and swimming.

Team Ireland’s 4x400m Mixed Relay Team performed out of their skins to secure a place in tomorrow’s final, setting a new national record by almost four seconds. The Irish quartet of Sophie Becker, Cillin Greene, Phil Healy and Christopher O’Donnell, posted a time of 3:12.88 to finish 2nd place in their heat behind Belgium. Having initially crossed the line in 4th, just one place outside automatic qualification, two teams ahead of them were subsequently disqualified, ensuring Team Ireland’s path to tomorrow’s final.

Team Ireland’s 4x400m Mixed Relay Team set a new national record by almost four seconds in style this evening, with the Irish team of Sophie Becker, Cillin Greene, Phil Healy and Christopher O’Donnell finishing in a time of 3:12.88. Having initially crossing the line in 4th, just one place outside automatic qualification, two teams ahead of them were subsequently disqualified, ensuring Team Ireland’s path to tomorrow’s final.

Cilllin Greene, in his first 4x400m relay, couldn’t have done a better job in setting the team up for success, handing the baton to Phil Healy in the lead. Healy had an intense battle with the opposition, also producing the relay leg of her life to give Sophie Becker the chance to do the same. Becker, and final leg athlete, Chris O’Donnell, both maintained Ireland’s strong 4th place spot through composed performances in lots of traffic, with the team eventually promoted to 2nd place post-race.

Speaking afterwards Healy was quick to praise her teammates, saying: “What a leg by Cillin! He totally took over and showed them his class. He gave me the baton in first, putting the team in the best possible position.”

Final leg runner O’Donnell added that the home support helped carry them around the track: “There might be nobody in the stands but we know there’s a full stadium at home watching us, and they’ve been absolutely amazing.”

The team returns to the Olympic Stadium on Day 8 to compete for a medal, in the historic first edition of this event at an Olympic Games.

Ireland’s second team member in Equestrian Eventing, Austin O’Connor with Irish-bred Colorado Blue (SHBGB), scored 38.00 in their Dressage test this evening in Tokyo to put them in 34th place after 42 competitors at the end of Session Two.

A test of two halves, the pair started off in a beautiful rhythm and flow but halfway through the test, when the pair entered their canter work, Colorado Blue got tense and nervous in the ring with O’Connor doing well to contain his expressive nature.

“Coming out of the ring and seeing that score, I am naturally disappointed. There is no hiding that fact,” commented O’Connor after his test. “I don’t know where it went wrong, I think the horse got a little bit shy in the ring. From a horse that has been doing good flying changes, he was seeing imaginary show jumps tonight and getting a bit high! It is over now, and the beauty of this sport is that there are two more days to look forward to.”

Earlier in the day, Sam Watson and Tullabeg Flamenco (ISH) completed on a score of 34.30 and currently sit in 28th position overnight with the final third of the competition to go tomorrow. The final member of the team, Sarah Ennis and Horseware Woodcourt Garrison (ISH), will take to the stage tomorrow.

After a tough day on the water for Irish sailor, Annalise Murphy, in the Laser Radial which saw her miss out on qualifying for the medal race at the weekend, Performance Director with Irish Sailing, James O’Callaghan stated: “Over two decades, Annalise has made a massive impact on our sport and is certainly Ireland’s greatest Olympic sailor ever. She has been a European champion and competed in three Olympic Games, won races in each and won a silver medal.  Her legacy lives on in the dozens of female and male athletes inspired by her performances.”

The action isn’t over in Enoshima just yet though, as there’s a big day ahead tomorrow for the 49ers duo of Robert Dickson and Sean Waddilove, as they enter the last day of racing.

Swimmer Daniel Wiffen was making headlines again this evening as he broke his second Irish Senior Record of the week, this time in the Men’s 1500m Freestyle, where he finished in a time of 15:07.69, breaking his own Irish Senior Record, and indeed, his Personal Best, by over 9 seconds.

Today’s swim follows up from a big Men’s 800m Freestyle swim from Wiffen earlier in the week and speaking on today’s race he said: “I’m ecstatic. I loved it. It was a fun race, I enjoyed it, taking it all in and got a nine-second PB as well!

“My target was to go and PB and try and get closer to the 15-minute barrier. I’m obviously closer now, seven seconds off. Tactic was just to get in, if there’s a racer, race with them. If not, I had to asses it during the race and pick it up if I wasn’t going fast enough.

Earlier in the session, Danielle Hill finished 6th in her Women’s 50m Freestyle heat in a time of 25:70, to see her finish out in 33rd position overall in a hugely competitive field that saw the talented Irish swimmer push hard all the way.

Speaking afterwards, Hill said: “It’s all fast when it comes down to the 50m. I’m swimming against the fastest women in the world. Although I may be the fastest woman in Ireland, it’s a very different field out here. It was nice to gain that experience. As I said before I went in, you sit in the house and you watch the Olympics and this is the event that you want to do. It’s the one you want to be successful in. I’m not quite there yet, but I can walk away with a few things to improve and definitely looking forward to next year.

“I still don’t think it’s sunk in that I qualified six weeks ago. It’s been a whirlwind experience, right from trials in April through Europeans and second trials and now here. I don’t think I’ve had a chance at any point to breathe and take a step back. For anyone who knows the journey I have been on in the past two weeks just to get here and be standing is something that I can be proud of. It’s been a great experience, and I can’t wait for many more.”

*Schedule may be subject to change