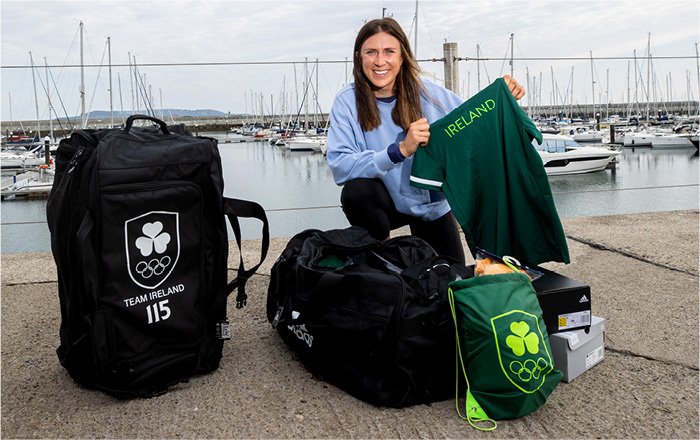 Murphy will be competing in her third Olympic Games; in London 2012 she came agonisingly close to a medal, finishing fourth. Against the odds the Dun Laoghaire based sailor finished second in Rio 2016, winning an Olympic silver medal for Team Ireland. Murphy is back competing in this Olympic category after taking a short break after Rio, when she temporarily switched her focus to the Volvo Ocean Race.

Heading into their first Olympic Games, Dickson and Waddilove are no strangers to success, in 2018 they won the 49er Under 23 Junior World title in Marseille, France. Their qualification for Tokyo came courtesy of a stellar performance in the 49er Olympic Qualifying event in Lanzarote last March, the last opportunity to secure an Olympic berth. A dominant start to the event saw the crew gain enough points to win the Olympic berth in the preliminary rounds, before they competed in the medal race.

On the day she collected her official kit Murphy said,

“Getting your gear, that’s when it all becomes a reality. It’s all happening now! It’s when you can believe that I’m going to the Olympic Games for the third time, it’s just mad! After Rio I spent some time in the Volvo Ocean Race, and really enjoyed being part of a crew so I competed for a while with Katie Tingle in the 49er FX, but as Tokyo came closer, I switched the focus back to the Laser Radial. I think the conditions in Tokyo could suit me, and I know I work harder than anyone else out there – so I’m ready for a good competition, and we have a good team out there, with Rob and Seán as well.”

“I’m really pleased to be announcing this sailing team today, they have pedigree and talent. On one hand we have Annalise who is already an Olympic medallist, bringing experience to the team heading into her third Olympics. On the other, we have Rob and Seán who are really exciting prospects. They showed their class at the qualifiers in Lanzarote earlier this year, and we are really looking forward to watching them perform in Tokyo.”

“Sailing has been represented at every Games since 1948, with the exception of Mexico 1968. A proud tradition continues in Tokyo with a small but strong team.  We are all delighted to be representing Ireland and after final preparations from our HQ in Dun Laoghaire we can’t wait to get on the plane to Tokyo. Our support has been fantastic and no doubt everyone will be feeling the same highs and lows with us over the summer.”

Team Ireland now consists of 50 officially selected athletes, with over 100 athletes spots confirmed across nineteen sports SEE HERE. The final team announcement is scheduled for the beginning of July. The Olympic Games in Tokyo will run from the 23rd July to 8th August 2021.